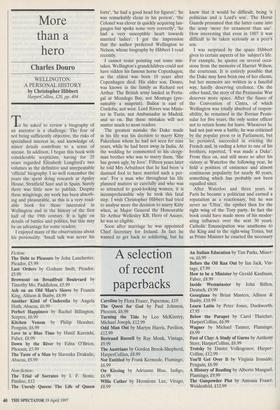 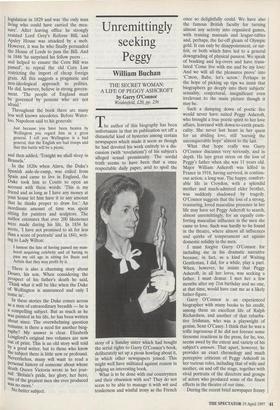 More than a hero

WELLINGTON: A PERSONAL HISTORY by Christopher Hibbert HaglerCollins, f20, pp. 404 T be asked to review a biography of an ancestor is a challenge. The fear of not being sufficiently objective, the risks of specialised interest in, and knowledge of, minor details contribute to a sense of unease. In addition, I began this book with considerable scepticism, having for 25 years regarded Elizabeth Longford's two volumes as the definitive and unrepeatable `official' biography. I so well remember the years she spent doing research at Apsley House, Stratfield Saye and in Spain. Surely there was little new to publish. Despite these misgivings, my work has been absorb- ing and pleasurable, as this is a very read- able book for those interested in Wellington and in the history of the first half of the 19th century. It is light on details of battles and politics, but this may be an advantage for some readers.

I enjoyed many of the observations about his personality. 'Small talk was never his forte', 'he had a good head for figures', 'he was remarkably clean in his person', 'the Colonel was clever in quickly acquiring lan- guages but spoke none very correctly', 'he had a very susceptible heart towards married ladies'. I got the impression that the author preferred Wellington to Nelson, whose biography by Hibbert I read recently.

I cannot resist pointing out some mis- takes. Wellington's grandchildren could not have ridden his famous horse Copenhagen, as the eldest was born 10 years after Copenhagen died. His elder son, Douro, was known in the family as Richard not Arthur. The British army landed in Portu- gal at Mondego Bay, not Montego (pre- sumably a misprint). Bailen is east of Cordoba, not west. Lord Rivers was Minis- ter in Turin, not Ambassador in Madrid, and so on. But these mistakes will not matter much to most readers.

The greatest mistake the Duke made in his life was his decision to marry Kitty Pakenham whom he had not seen for nine years, while he had been away in India. At the wedding he commented to his clergy- man brother who was to marry them, 'She has grown ugly, by Jove'. Fifteen years later he told Mrs Arbuthnot that he had been 'a damned fool to have married such a per- son'. For a man who throughout his life planned matters so carefully and who was so attracted to good-looking women, it is incomprehensible why he took this fatal step. I wish Christopher Hibbert had tried to analyse more the decision to marry Kitty when, as Major General the Honourable Sir Arthur Wellesley KB, Hero of Assaye, he was so eligible.

Soon after marriage he was appointed Chief Secretary for Ireland. In fact he wanted to get back to soldiering, but he knew that it would be difficult, being 'a politician and a Lord's son'. The Horse Guards presumed that the latter came into the army 'more for ornament than use'. How interesting that even in 1807 it was difficult to be taken seriously as a peer's son.

I was surprised by the space Hibbert gives to certain aspects of his subject's life. For example, he quotes on several occa- sions from the memoirs of Harriet Wilson, the courtesan. It is entirely possible that the Duke may have been one of her clients, but her memoirs are written in a fanciful way, hardly deserving credence. On the other hand, the story of the Peninsular War deserves more space. After the fiasco of the Convention of Cintra, of which Wellington was totally absolved of respon- sibility, he remained in the Iberian Penin- sular for five years, the only senior officer not to return home for leave. Whenever he had not just won a battle, he was criticised by the popular press or in Parliament, but he persisted, succeeded in evicting the French and, in ending a letter to one of his brothers, reported, 'I was made a Duke'. From then on, and still more so after his victory at Waterloo the following year, he held a position of eminence and almost continuous popularity for nearly 40 years, something which has probably not been equalled since.

After Waterloo and three years in Paris he became a politician and earned a reputation as a reactionary, but he was never an 'Ultra', the epithet then for the right wing of the Tory party. In fact the book could have made more of his moder- ating influence over the next 30 years. Catholic Emancipation was anathema to the King and to the right-wing Tories, but as Prime Minister he enacted the necessary legislation in 1829 and was 'the only man living who could have carried the mea- sure'. After leaving office he strongly resisted Lord Grey's Reform Bill, and Apsley House was attacked by a mob. However, it was he who finally persuaded the House of Lords to pass the Bill. And in 1846 'he surprised his fellow peers . . . and helped to ensure the Corn Bill was passed', to repeal the old Corn Law restricting the import of cheap foreign grain. All this suggests a pragmatic and non-ideological approach to politics. He did, however, believe in strong govern- ment. 'The people of England must be governed by persons who are not afraid.'

Throughout the book there are many less well known anecdotes. Before Water- loo, Napoleon said to his generals: Just because you have been beaten by Wellington you regard him as a great general. I tell you Wellington is a bad general, that the English are bad troops and that this battle will be a picnic, and then added, 'Tonight we shall sleep in Brussels.'

In the 1820s when Alava, the Duke's Spanish aide-de-camp, was exiled from Spain and came to live in England, the Duke took him to Coutts to open an account with these words: 'This is my friend and as long as I have any money at Your house let him have it to any amount that he thinks proper to draw for.' An inordinate amount of time was spent sitting for painters and sculptors. The author estimates that over 200 likenesses were made during his life. In 1834 he wrote, `I have not promised to sit for less than a score of portraits' and in 1841, writ- ing to Lady Wilton: I lament the fate of having passed my man- hood acquiring celebrity and of having to pass my old age in sitting for Busts and Artists that they may profit by it.

There is also a charming story about Douro, his son. When considering the prospect of his father's death he said, Think what it will be like when the Duke of Wellington is announced and only I Come in'.

In these stories the Duke comes across as a man of extraordinary breadth — he is a compelling subject. But as much as he was painted in his life, he has been written about since. The overwhelming question remains: is there a need for another biog- raphy? My answer is clear. Elizabeth Longford's original two volumes are now out of print. This is an old story well told by a good writer, but to those who know the subject there is little new or profound. Nevertheless, many will want to read a personal history of someone about whose death Queen Victoria wrote in her jour- nal: 'Britain's pride, her glory, her hero, one of the greatest men she ever produced was no more.' No better subject.