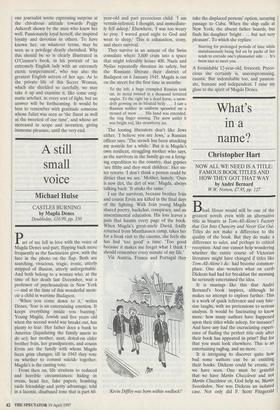 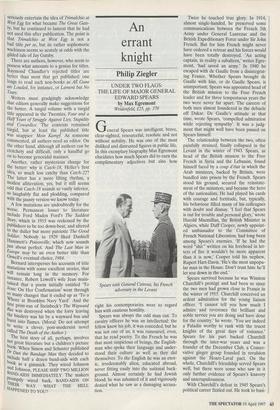 What's in a name?

NOW ALL WE NEED IS A TITLE: FAMOUS BOOK TITLES AND HOW THEY GOT THAT WAY by Andre Bernard W W. Norton, £7.95, pp. 127 Bleak House would still be one of the greatest novels even with an alternative title as bizarre as Tom-All-Alone's Factory that Got Into Chancery and Never Got Out. Titles do not make a difference to the quality of the book. But they do make a difference to sales, and perhaps to critical reception. And one cannot help wondering whether the entire course of Victorian literature might have changed if titles like Tom-All-Alone's &c. had become common- place. One also wonders what on earth Dickens had had for breakfast the morning he seriously entertained the idea.

It is musings like this that Andre Bernard's book inspires, although be makes no attempt to explore further. This is a work of quick reference and easy bite- size laughs, with no pretensions to serious analysis. It would be fascinating to know more: how many authors have happened upon their titles while asleep, for instance? And have any had the excruciating experi- ence of finding the perfect title only after their book has appeared in print? But for that you must look elsewhere. This is an entertaining ragbag, and no more.

It is intriguing to discover quite how bad some authors can be at entitling their books. Dickens could be erratic, as we have seen. One must be grateful that we have Martin Chuzzlewit and not Martin Chuzzletoe or, God help us, Martin Sweetledew. Nor was Dickens an isolated case. Not only did F. Scott Fitzgerald seriously entertain the idea of Trimalchio at West Egg for what became The Great Gats- by, but he continued to lament that he had not used this after publication. The point is that Trimalchio at West Egg is not a bad title per se, but its rather sophomoric wackiness seems so acutely at odds with the gilded tale of Jay Gatsby.

There are authors, however, who seem to possess what amounts to a genius for titles. Raymond Chandler's rejected titles are better than most that get published: one longs to read such non-books as All Guns are Loaded, for instance, or Lament but No Tears.

Writers must grudgingly acknowledge that editors generally make suggestions for the better. A turgid volume with a turgid title appeared in the Twenties, Four and a Half Years of Struggle Against Lies, Stupidity and Cowardice. The contents remained turgid, but at least the published title was snappier: Mein Kampf As someone commented, all authors need an editor. On the other hand, although all authors can be crotchety and difficult, only a handful go on to become genocidal maniacs.

Another, rather mysterious change for the better: why is Catch-18, Heller's first idea, so much less catchy than Catch-22? The latter has a more lilting rhythm, a modest alliteration, yes, but it still seems odd that Catch-18 sounds so vastly inferior, so laughably flat and plodding, compared with the jaunty version we know today. A few mutations are undoubtedly for the worse. Permanent losses to literature include Ford Madox Ford's The Saddest Story, which in 1915 was reckoned by the Publishers to be too down-beat, and altered to the duller but more patriotic The Good Soldier. Nobody in 1929 liked Dashiell Hammett's Poisonville, which now sounds just about perfect. And The Last Man in Europe may be an even better title than Orwell's eventual choice, 1984. Bernard intersperses his accounts of title mutations with some excellent stories, that will remain long in the memory. For instance, Robert Lowell's wife Jean main- tained that a poem initially entitled 'To Jean: On Her Confirmation' went through so many changes that it ended up as 'To a Whore at Brooklyn Navy Yard'. And the first print-run of Steinbeck's The Wayward Bus was destroyed when the lorry leaving the bindery was hit by a wayward bus and burst into flames. (Moral: Do not attempt to write a clever, post-modernist novel Called The Death of the Author.) The best story of all, perhaps, involves not great literature but a children's picture book. When Simon and Schuster published !Jr Dan the Bandage Man they decided to book half a dozen band-aids with each °00k as a gimmick. They wired Johnson and Johnson, PLEASE SHIP TWO MILLION NAND-AIDS IMMEDIATELY. The makers Promptly wired back, BAND-AIDS ON THEIR WAY. WHAT THE HELL HAPPENED TO YOU?