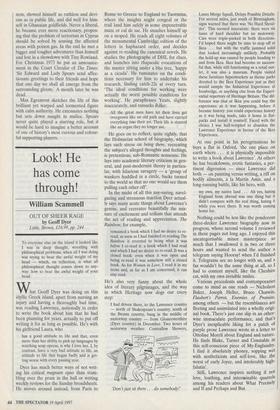 Look! He has come through!

What Geoff Dyer was doing on this idyllic Greek island, apart from nursing an injury and having a thoroughly bad time, was reading Lawrence, notionally in order to write the book about him that he had been planning for years, actually to put off writing it for as long as possible. He's with his girlfriend Laura, who

Dyer has much better ways of not writ- ing his critical magnum opus than stum- bling over the pram in the hall or writing weekly reviews for the Sunday broadsheets. He moves around instead, from Paris to Rome to Greece to England to Taormina, where the insights might congeal or the trail land him safely in some impenetrable maze or cul de sac. He smashes himself up on a moped. He reads all eight volumes of the monumental Cambridge edition of the letters in haphazard order, and decides against re-reading the canonical novels. He studies the photographs of DHL for clues, and launches into rhapsodic evocations of the master sitting under a bho tree, 'happy as a cicada'. He ruminates on the condi- tions necessary for him to undertake his research, finding catch-22s at every turn. 'The ideal conditions for working were actually the worst possible conditions for working'. He paraphrases Yeats, slightly inaccurately, and ransacks Rilke:

All the great men have let their lives get overgrown like an old path and have carried everything into their art. Their life is stunted like an organ they no longer use.

He goes on to reflect, quite rightly, that the Holmseian school of biography, which lays such stress on being there, recreating the subject's alleged thoughts and feelings, is pretentious, sub-Romantic nonsense. He lays into academic literary criticism in gen- eral, and post-modernist theory in particu- lar, with hilarious savagery — a 'group of wankers huddled in a circle, backs turned to the world so that no one would see them pulling each other off.

In the midst of all this nay-saying, navel- gazing and strenuous inaction Dyer actual- ly says many acute things about Lawrence's genius, and recreates beautifully the mix- ture of excitement and tedium that attends the act of reading and appreciation. The Rainbow, for example, remained a book which I had no desire to re- read; as soon as I had finished re-reading The Rainbow it reverted to being what it was before I re-read it: a book which I had read and which I had no desire to re-read. It was a closed book: even when it was open and being re-read it was somehow still a closed book. As for Women in Love, I read it in my teens and, as far as I am concerned, it can stay read.

He's also very funny about the whole idea of literary pilgrimages, and the way in which Heritage now dogs our every step: I had driven there, to the Lawrence country — north of Shakespeare's country, south of the Bronte country, bang in the middle of motorway country — from Gloucestershire (Dyer country) in December. Two hours of motorway weather: Contraflow Showers, 'Don't just sit there . . . do somebody!' Lanes Merge Squall, Delays Possible Drizzle. For several miles, just south of Birmingham, signs warned that there was 'No Hard Shoul- der'. This seemed inaccurate: there were six lanes of hard shoulder but no motorway. Cars were triple-parked in both directions. I'd hoped there might be time to stop off at Ikea . . . but with the traffic jammed solid that looked increasingly unlikely. Probably the hold-up was caused by people heading to and from Ikea. Ikea had become so success- ful that, while still functioning as a retail out- let, it was also a museum. People visited these furniture hypermarkets as theme parks devoted to the Ikea Experience just as they would sample the Industrial Experience at Ironbridge, or anything else from the Experi- ential repertory of Heritage Britain. The dif- ference was that at Ikea you could buy the experience as it was happening, before it became history: you could experience history as it was being made, take it home in flat- packs and install it yourself. Faced with the choice I was half-tempted to abandon the Lawrence Experience in favour of the Ikea Experience.

Nothing could be less like the ponderous three-decker Lawrence biography now in progress, whose second volume I reviewed in these pages not long ago. I enjoyed this uncategorisable minor masterpiece so much that I swallowed it in two or three hours and wanted to send the author a telegram saying Hooray! when I'd finished it. Telegrams are no longer with us, and a fax wouldn't be the same thing at all, so I had to content myself, like the Cheshire cat, with my own invisible smiles.

Various precedents and contemporaries come to mind as one reads — Nicholson Baker, Joseph Heller, Bruce Chatwin, Flaubert's Parrot, Enemies of Promise, among others — but the resemblances are fleeting and assimilated into a wholly origi- nal book. There's just one slip in an other- wise immaculate performance, and that's Dyer's inexplicable liking for a patch of purple prose Lawrence wrote in a letter to Ottoline Morell about England and nature. He finds Blake, Turner and Constable in this self-conscious piece of My-Englandry• I find it absolutely phoney, sopping wet with aestheticism and self-love, like the worst of early Joyce, and intolerably high- falutin'.

Still, Lawrence inspires nothing if not love, loathing, and interminable quarrels among his readers about What Precisely and If and Perhaps and But.