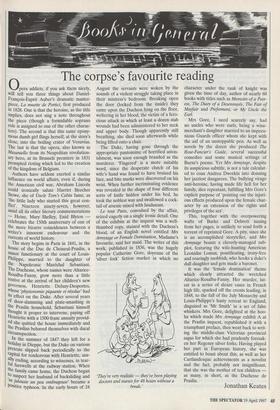 opera addicts, if you ask them nicely, will tell you three things about Daniel- Francois-Esprit Auber's dramatic master- piece, La muette de Portici, first produced in 1828. One is that the heroine, as the title implies, does not sing a note throughout the piece (though a formidable soprano role is assigned to one of the other charac- ters). The second is that this same epony- mous dumb girl flings herself, at the story's close, into the boiling crater of Vesuvius. The last is that the opera, also known as Masaniello from its Neapolitan revolution- ary hero, at its Brussels premiere in 1831 prompted rioting which led to the creation of the kingdom of Belgium.

Authors have seldom exerted a similar influence on world affairs, even if, during the American civil war, Abraham Lincoln could ironically salute Harriet Beecher Stowe, she of Uncle Tom's Cabin fame, as the little lady who started this great con- flict'. Nineteen ninety-seven, however, amid all its other literary commemorations — Heine, Mary Shelley, Enid Blyton celebrates the 150th anniversary of one of the more bizarre coincidences between a writer's innocent endeavour and the currents of world history. The story begins in Paris in 1841, in the house of the Duc de Choiseul-Praslin, a rumor functionary at the court of Louis- Philippe, married to the daughter of the Napoleonic Marechal Sebastiani. The Duchesse, whose names were Altarice- Rosalba-Fanny, grew more than a little restive at the arrival of her children's new governess, Henriette Deluzy-Desportes, Whose physionomie piquante et resolue' had its effect on the Duke. After several years of door-slamming and plate-smashing in the Praslin household, Sebastiani himself thought it proper to intervene, paying off Henriette with a 1500-franc annuity provid- ed she quitted the house immediately and the Praslins behaved themselves with ducal circumspection. In the summer of 1847 they left for a holiday in Dieppe, but the Duke on various pretexts slipped back periodically to the capital for rendezvous with Henriette, usu- 11Y ending, according to witnesses, in tear- ful farewells at the railway station. When the family came home, the Duchess began to suspect her husband of backsliding and sa Jalousie un peu ombrageuse' became a Positive typhoon. In the early hours of 24 August the servants were woken by the sounds of a violent struggle taking place in their mistress's bedroom. Breaking open the door (locked from the inside) they came upon the Duchess lying on the floor, weltering in her blood, the victim of a fero- cious attack in which at least a dozen stab wounds had been administered to her neck and upper body. Though apparently still breathing, she died soon afterwards while being lifted onto a chair. The Duke, having gone through the appropriate pantomime of horrified aston- ishment, was soon enough branded as the murderer. 'Fingered' is a more suitable word, since the desperate clutch of his wife's hand was found to have bruised his face, and bite marks were discovered on his wrist. When further incriminating evidence was revealed in the shape of four different sorts of knife hidden under his bed, he took the noblest way and swallowed a cock- tail of arsenic mixed with laudanum.

Le tout Paris, convulsed by the affair, seized eagerly on a single ironic detail. One of the exhibits at the inquest was a well- thumbed copy, stained with the Duchess's blood, of an English novel entitled Mrs Armytage or Female Domination, Madame's favourite, said her maid. The writer of this work, published in 1836, was the hugely popular Catherine Gore, doyenne of the `silver fork' fiction market in which no `They're very realistic — they've been playing doctors and nurses for 48 hours without a break' character under the rank of knight was given the time of day, author of nearly 60 books with titles such as Memoirs of a Peer- ess, The Diary of a Desennuyee, The Fair of Mayfair and Preferment, or My Uncle the Earl.

Mrs Gore, I need scarcely say, had no uncles who were earls, being a wine- merchant's daughter married to an impecu- nious Guards officer whom she kept with the aid of an unstoppable pen. As well as novels by the dozen she produced The Rose-Fancier's Guide, several successful comedies and some musical settings of Bums's poems. Yet Mrs Armytage, despite its auspicious subtitle, is not a tale calculat- ed to coax Andrea Dworkin into donning her jazziest dungarees. The bullying virago anti-heroine, having made life hell for her family, dies repentant, fulfilling Mrs Gore's explicit purpose of 'pointing out the injuri- ous effects produced upon the female char- acter by an extension of the rights and privileges of the sex'.

This, together with the overpowering wafts of Burke and Debrett issuing from her pages, is unlikely to send forth a torrent of reprinted Gore. A pity, since she is an accomplished storyteller, and Mrs Armytage boasts a cleverly-managed sub- plot, featuring the wife-hunting American Leonidas Lomax, pontificating, irony-free and roaringly snobbish, who hooks a duke's dull daughter and gets made a baronet.

It was the 'female domination' theme which clearly attracted the wretched Altarice-Rosalba-Fanny. Her murder, lat- est in a series of sleaze cases in French high life, sparked off the events leading, in 1848, to the fall of the July Monarchy and Louis-Philippe's hasty retreat to England, disguised as 'Mr Smith' in a set of false whiskers. Mrs Gore, delighted at the hoo- ha which made Mrs Armytage exhibit A at the Praslin inquest, republished it with a triumphant preface, then went back to writ- ing the middle-class Victorian provincial sagas for which she had prudently foresak- en her Regency silver forks. Having played her part in European history, she was entitled to boast about this, as well as her Cartlandesque achievements as a novelist and the fact, probably not insignificant, that she was the mother of ten children as many, in short, as the Duchesse de Praslin.