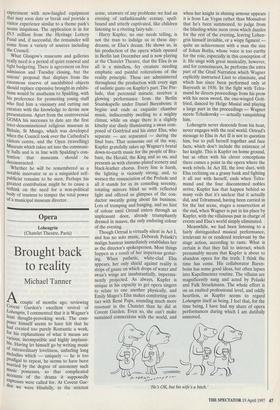 Brought back to reality

couple of months ago, reviewing Covent Garden's excellent revival of Lohengrin, I commented that it is Wagner's least thought-provoking work. The com- poser himself seems to have felt that he had created too purely Romantic a work, for his explanations of what it means are various, incompatible and highly implausi- ble. Having let himself go by writing music of extraordinary loveliness, unfurling long melodies which — uniquely — he is too prodigal to repeat, he seems to have been worried by the degree of autonomy such music possesses, so that complicated accounts of the drama it supposedly expresses were called for. At Covent Gar- den we were blissfully, in the strictest sense, unaware of any problems: we had an evening of unfashionable ecstasy, spell- bound and utterly captivated, like children listening to a riveting fairy-tale.

Harry Kupfer, no one needs telling, is not the man to indulge us in these day- dreams, or Elsa's dream. He shows us, in his production of the opera which opened in Berlin last December and is now playing at the Chatelet Theatre, that the Elsa in us all is a mindless, fey creature needing emphatic and painful reiterations of the reality principle. These are administered throughout the production with every sign of sadistic gusto on Kupfer's part. The Pre- lude, that perennial miracle, receives a glowing performance from the Berlin Staatskapelle under Daniel Barenboim: it begins and ends as exquisite chamber music, indiscernibly swelling to a mighty climax, while on stage there is a slightly kitschy star dimly illuminating a swan com- posed of Gottfried and his sister Elsa, who separate — are separated — during the final bars. That nonsense out of the way, Kupfer gratefully takes up Wagner's brutal down-to-earth music for the people of Bra- bant, the Herald, the King and so on, and presents us with chrome-plated scenery and black-leather chorus. Every line is harsh, the lighting is viciously strong, and, to worsen the renunciation of the Prelude and all it stands for in its consoling serenity, rotating mirrors blind us with reflected light and offered us glimpses of the con- ductor sweatily going about his business. Lots of tramping and banging, and no hint of colour until Ortrud enters through an unpleasant door, already triumphantly dressed in mauve, the only enduring colour of the evening. Though Ortrud is virtually silent in Act I, and has no solo music, Deborah Polaski's malign hauteur immediately establishes her as the director's spokesperson. Most things happen as a result of her imperious gestur- ing. When pathetic, white-clad Elsa appears, her only shield against reality is strips of gauze on which drops of water and swan's wings are insubstantially, imperma- nently projected. As always, Kupfer is unique in his capacity to get opera singers to relate to one another physically, and Emily Magee's Elsa makes comforting con- tact with Rend Pape, sounding much more resonant in the Chatelet than he did at Covent Garden. Even so, she can't make sustained connections with the world, and when her knight in shining armour appears it is from Las Vegas rather than Monsalvat that he's been summoned, to judge from the blinding-white neon cross which dazzles for the rest of the evening, leaving Lohen- grin himself invisible, or a wispy figment quite an achievement with a man the size of Johan Botha, whose voice is too earthy for the role, especially in this conception of it. He sings with great musicality, however, and for connoisseurs, he performs the extra part of the Grail Narration which Wagner explicitly instructed Liszt to eliminate, and which has since been performed only at Bayreuth in 1936. In the fight with Telra- mund he directs proceedings from his prow with his neon sword, the one-winged Gott- fried, danced by Helge Musial and playing a large part in the proceedings — Wagner meets Tchaikovsky — actually vanquishing him.

Lohengrin never descends from his boat, never engages with the real world. Ortrud's message to Elsa in Act II is not to question him, but to pull herself together and face facts, which don't include the existence of her knight. This is Kupfer on home ground, but as often with his clever conceptions there comes a point in the opera where the work rebels. In Act III, the love duet, with Elsa reclining on a grassy bank and fighting it all out with herself, ends when Telra- mund and the four discontented nobles arrive, Kupfer has that happen behind so many veils that it's unclear that it actually did, and Telramund, having been carried in for the last scene, stages a resurrection at the end, when Wagner is put in his place by Kupfer, with the villainous pair in charge of events and Elsa's world simply eliminated.

Meanwhile, we had been listening to a fairly distinguished musical performance, irrelevant to or rendered irrelevant by the stage action, according to taste. What is certain is that they fail to interact, which presumably means that Kupfer is about to abandon opera for the truth. I think the time has come. His collaborator Baren- boim has some good ideas, but often lapses into Kapellmeister routine. The villains are magnificently sung and acted by Polaski and Falk Struckmann. The whole effort is on an exalted professional level, and oddly heartless, as Kupfer seems to regard Lohengrin itself as being. I feel that, for the time being, I have had my share of opera performances during which I am dutifully unmoved.

OK but his wife's a bitch.'