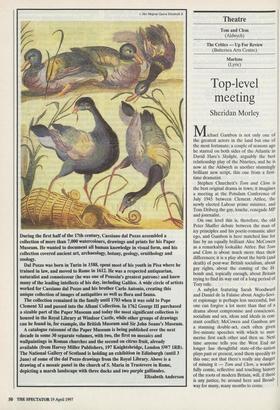 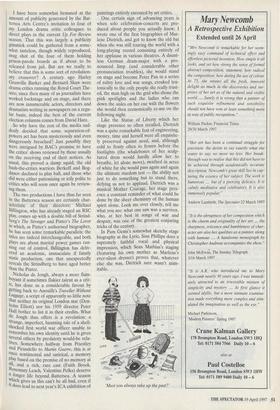 Michael Gambon is not only one of the greatest actors in the land but one of the most fortunate; a couple of seasons ago he starred on both sides of the Atlantic in David Hare's Skylight, arguably the best relationship play of the Nineties, and he is now at the Aldwych in another stunningly brilliant new script, this one from a first- time dramatist.

Stephen Churchett's Tom and Clem is the best original drama in town; it imagines a meeting at the Potsdam Conference of July 1945 between Clement Attlee, the newly elected Labour prime minister, and Tom Driberg the gay, louche, renegade MP and journalist.

On one level this is, therefore, the old Peter Shaffer debate between the man of icy principles and his poetic-romantic alter ego, and Gambon is here matched line for line by an equally brilliant Alec McCowen as a remarkably lookalike Attlee. But Tom and Clem is about much more than their differences; it is a play about the birth (and death) of post-war British socialism, about gay rights, about the coming of the H- bomb and, topically enough, about Britain trying to find its way out of a long period of Tory rule.

A subplot featuring Sarah Woodward and Daniel de la Falaise about Anglo-Sovi- et espionage is perhaps less successful, but one can forgive a lot more than that of a drama about compromise and conscience, socialism and sex, ideas and ideals in con- stant conflict; McCowen and Gambon are a stunning double-act, each often given five-minute speeches with which to mes- merise first each other and then us. Next time anyone tells you the West End no longer has thoughtful state-of-the-nation plays past or present, send them speedily to this one; not that there's really any danger of missing it — Tom and Clem, a wonder- fully comic, reflective and touching history of the roots of modern Britain, will, if there is any justice, be around here and Broad- way for many, many months to come. I have been somewhat bemused at the amount of publicity generated by the Bat- tersea Arts Centre's invitation to four of my London drama critic colleagues to direct plays in the current Up For Review season. That this was largely a publicity gimmick could be gathered from a some- what tasteless, though widely reproduced, mug shot of the four of them holding prison-parole boards as if about to be released from jail. But are we really to believe that this is some sort of revolution- ary crossover? A century ago Harley Granville Barker and Bernard Shaw were drama critics running the Royal Court The- atre; since then many of us journalists have worked backstage and on stage, and there are now innumerable actors, directors and dramatists writing in newspapers on a regu- lar basis; indeed the best of the current election columns comes from David Hare.

So why have the rest of the media sud- denly decided that some separation-of- powers act has been mysteriously and even dangerously breached? Just possibly they were intrigued by BAC's promise to have the critics' shows reviewed by those usually on the receiving end of their notices. As usual, this proved a damp squid; the old bash-the-critics warriors Berkoff and Bog- danov declined to play ball, and those who did were either patronising or icily polite to critics who will soon once again be review- ing them.

The two productions I have thus far seen in the Battersea season are certainly char- acteristic of their directors: Michael Killington, who has already staged an RSC play, comes up with a double bill of Strind- berg's The Stronger and Pinter's The Lover in which, as Pinter's authorised biographer, he has seen some remarkable parallels: the titles are indeed interchangeable, and both Plays are about marital power games run- ning out of control. Billington has deliv- ered an academic, immaculate if faintly static production, one that unexpectedly reveals the Strindberg to have aged better than the Pinter.

Nicholas de Jongh, always a more flam- boyant if sometimes flakier talent as a crit- ic, has done us a considerable favour by getting back to Anouilh's Traveller Without Luggage, a script of apparently so little note that neither its original London star (Den- holm Elliott) nor his 1959 director Peter Hall bother to list it in their credits. What de Jongh thus offers is a revelation: a strange, imperfect, haunting tale of a shell- shocked first world war officer unable to remember his own identity until he is given several others by predatory would-be rela- tives. Somewhere halfway from Priestley and Pirandello to Martin Guerre, this is at once sentimental and satirical, a memory play based on the premise of no memory at all, and a rich, rare cast (Faith Brook, Rosemary Leach, Valentine Pelka) deserve a longer life beyond Battersea. A season which gives us this can't be all bad, even if it does lead to next year's ICA exhibition of paintings entirely executed by art critics.

One certain sign of advancing years is when solo celebration-concerts are pro- duced about people you actually knew; I wrote one of the first biographies of Mar- lene Dietrich, and got to know the old bat when she was still touring the world with a long-playing record consisting entirely of her applause in various theatres. A daunt- less German drum-major with a pro- nounced limp (and considerable other pronunciation troubles), she would stand on stage and become Peter Pan in a series of sultry love and war songs, croaked teu- tonically to the only people she really trust- ed, the man high on the grid who shone the pink spotlights and the ladies who ran down the aisles on her cue with the flowers she would then economically re-use on the following night. Like the Statue of Liberty which her stage presence so often recalled, Dietrich was a quite remarkable feat of engineering; money, time and herself were all exquisite- ly preserved against need, and, although cold to frosty often to frozen before the footlights (the whalebones of her sculp- tured dress would hardly allow her to breathe, let alone move), swathed in acres of white fur she would pass again and again the ultimate stardom test — the ability not just to do something but to stand there, defying us not to applaud. Dietrich was a musical Mother Courage, her stage pres- ence a constant reminder of what could be done by the sheer chemistry of the human spirit alone. Look me over closely, tell me what you see: what one saw was a survivor, who, at her best in songs of war and despair, was one of the greatest conjuring tricks of the century.

In Pam Gems's somewhat sketchy stage biography at the Lyric, Sian Phillips does a supremely faithful vocal and physical impression, which Sean Mathias's staging (featuring his own mother as Marlene's ever-silent dresser) proves that, whatever else she was, Dietrich sure wasn't inim- itable.

Must you always rake up the past?'