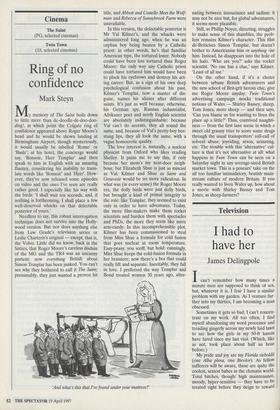 Ring of no confidence

My memory of The Saint boils down to little more than de-doodle-de-doo-doo- ding! , at which point the Colgate ring of confidence appeared above Roger Moore's head and he would be shown landing at Birmingham Airport, though mysteriously, it would usually be labelled 'Rome' or le'; at his hotel, the concierge would say, `Bonsoir, Herr Templar' and then speak to him in English with an amazing fluency, considering his inability to trans- late words like `Bonsoie and 'Herr'. How- ever, they've now released some episodes on video and the ones I've seen are really rather good. I especially like his way with the birds: 'I shall wait ten seconds, and, if nothing is forthcoming, I shall place a few well-deserved whacks on that delectable posterior of yours.'

Needless to say, this robust interrogation technique does not survive into the Holly- wood version. But nor does anything else from Lew Grade's television series or Leslie Charteris's original — except, that is, the Volvo. Little did we know, back in the Sixties, that Roger Moore's careless disdain of the MG and the TR4 was an uncanny portent: now everything British about Simon Templar has been junked. You can't see why they bothered to call it The Saint; presumably, they just wanted a proven hit title, and Abbott and Costello Meet the Wolf- man and Rebecca of Sunnybrook Farm were unavailable.

In this version, the delectable posterior is Mr Val Kilmer's, and the whacks were administered long ago, when he was an orphan boy being beaten by a Catholic priest: in other words, he's that familiar American type, the tortured loner. Nobody could have been less tortured than Roger Moore: the only way any Catholic priest could have tortured him would have been to pluck his eyebrows and destroy his act- ing career. But, as a sign of his own deep psychological confusion about his past, Kilmer's Templar, now a master of dis- guise, names his aliases after different saints. It's just as well because, otherwise, his German spy, Russian industrialist, Afrikaner poet and nerdy English scientist are absolutely indistinguishable: because Val can't do accents, they all sound the same, and, because of Val's pretty-boy bee- stung lips, they all look the same, with a vague homoerotic quality.

The love interest is, naturally, a nuclear physicist from Oxford who likes reading Shelley. It pains me to say this, if only because her mom's my next-door neigh- bour, but Elizabeth Shue is just as miscast as Val: Kilmer and Shue as Saint and Greavesie would be no more ridiculous. In what was (in every sense) the Roger Moore era, the dolly birds were just dolly birds, but brought a kind of primal integrity to the role: like Templar, they seemed to exist only in order to have adventures. Today, the more film-makers make them rocket scientists and burden them with spectacles and PhDs, the more they seem like mere arm-candy. In this incomprehensible plot, Kilmer has been commissioned to steal from Miss Shue a formula for cold fusion that goes nuclear at room temperature. Easy-peasy, you scoff, but hold: cunningly, Miss Shue keeps the cold-fusion formula in her brassiere; now there's a bra that could really lift and separate. Inevitably, they fall in love. I preferred the way Templar and Bond treated women 30 years ago, alter- nating between insouciance and sadism: it may not be nice but, for global adventurers, it seems more plausible.

Still, as Phillip Noyce, directing, struggles to make sense of this shambles, the prob- lem remains Kilmer's character. This film de-Briticises Simon Templar, but doesn't bother to Americanise him or anything -ise him. Instead, he disappears into the hole of his halo. 'Who are you?' asks the rocket scientist. 'No one has a clue,' says Kilmer. `Least of all me.'

On the other hand, if it's a choice between urbane British adventurers and the new school of Brit-grit heroin chic, give me Roger Moore anyday. Twin Town's advertising campaign mocks traditional notions of Wales — Shirley Bassey, sheep, Tom Jones, more sheep — and then says, `Can you blame us for wanting to liven the place up a little?' Thus, contrived naughti- ness — from the first lane scene in which a sweet old granny tries to score some drugs through the usual trainspotters' roll-call of solvent abuse, joyriding, arson, urinating, etc. The trouble with this 'alternative' cul- ture is that it's not alternative at all: what happens in Twin Town can be seen on a Saturday night in any average-sized British market town. This is a poseurs' take on the all too familiar intimidatory, brutish main- stream culture of modern Britain. If you really wanted to liven Wales up, how about a movie with Shirley Bassey and Tom Jones, as sheep-farmers?