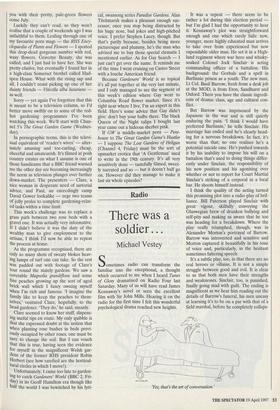 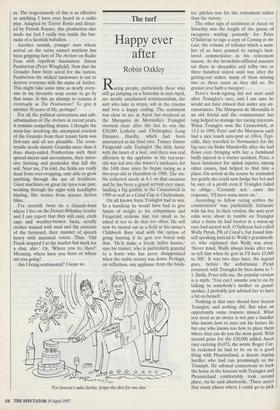 Sometimes radio can transform the familiar into the exceptional, a thought which occurred to me when I heard Tunes of Glory dramatised on Radio Four last Saturday. Many of us will have read James Kennaway's novel or seen the excellent film with Sir John Mills. Hearing it on the radio for the first time I felt this wonderful psychological drama reached new heights. It was a repeat — there seem to be rather a lot during this election period but I'm glad I had the opportunity to hear it. Kennaway's plot was straightforward enough and one which rarely fails: new, younger, more highly educated man arrives to take over from experienced but now expendable older man. He set it in a High- land regiment where war hero and whisky- soaked Colonel Jock Sinclair is acting commanding officer of a battalion. His background: the Gorbals and a spell in Barlinnie prison as a youth. The new man, Lt Col. Basil Barrow, fresh from a desk job at the MOD, is from Eton, Sandhurst and Oxford. There you have the classic ingredi- ents of drama: class, age and cultural con- flict.

But Barrow was imprisoned by the Japanese in the war and is still quietly enduring the pain. 'I think I would have preferred Barlinnie,' he tells Sinclair. His marriage has ended and he's clearly head- ing for a nervous breakdown. In fact, it's worse than that; no one realises he's a potential suicide case. He's pushed towards it by his inability to impose his will on a battalion that's used to doing things differ- ently under Sinclair, the responsibility of his new position and his agonising over whether or not to report for Court Martial Sinclair's striking of a corporal in a local bar. He shoots himself instead.

I think the quality of the acting turned this promising plot into a radio play of bril- liance. Bill Paterson played Sinclair with great vigour, skilfully conveying the Glaswegian brew of drunken bullying and self-pity and making us aware that he too was heading for a breakdown. Where the play really triumphed, though, was in Alexander Morton's portrayal of Barrow. Barrow was introverted and sensitive and Morton captured it beautifully in his tone of voice and, particularly, in the hesitant sometimes faltering speech.

It's a subtle play, too, in that there are no real heroes or villains. It is not a simple struggle between good and evil. It is clear to us that both men have their strengths and weaknesses. Sinclair, too, is punished, finally going mad with guilt. The ending is magnificent as we hear him reading out the details of Barrow's funeral, his men uneasy at learning it's to be on a par with that of a field marshal, before he completely collaps- `Yes, that's the art of conversation.' es. The tragi-comedy of this is as effective as anything I have ever heard in a radio play. Adapted by Trevor Royle and direct- ed by Patrick Rayner, this production also made me feel I really was inside the bar- racks of a Scottish battalion.

Another newish, younger man whose arrival on the scene caused mayhem has been gripping fans of The Archers on Radio Four with repellent fascination: Simon Pemberton (Peter Wingfield). Now that the Grundys have been saved for the nation, Pemberton the wicked landowner is out to destroy everyone with the name of Archer. This might take some time as nearly every- one in my favourite soap seems to go by that name. Is this an attempt to rename it eventually as The Pembertons? To give it another 50 years of life, perhaps?

For all the political correctness and sub- urbanisation of The Archers in recent years, it remains compelling drama. I thought the story-line involving the attempted eviction of the Grundys from their tenant farm was first-rate and all too plausible. The coun- tryside needs chaotic Grundys more than it does sharp-suited Pembertons with their spread-sheets and accountants, their inten- sive farming and pesticides that kill the soil. Near me, I'm told, the fields are really dead from over-cropping, only able to grow anything through the use of fertilisers. Giant machines on great fat tyres roar past, working through the night with headlights blazing, like scenes from science fiction films.

I've recently been on a Grundy-hunt where I live on the Dorset-Wiltshire border and I can report that they still exist, cloth caps and weather-beaten faces, scruffy clothes stained with mud and the contents of the farmyard, their manner of speech heavy with ancestral voices. Thus: 'Old Frank stopped I at the market last week for a chat, ahrr.' Or, 'Where you to, then?' Meaning, where have you been or where are you going?

Am I being sentimental? I hope so.