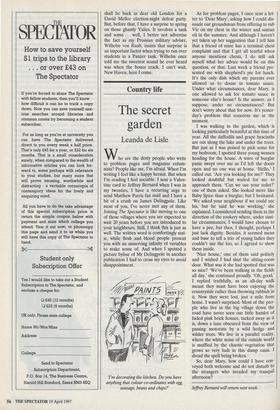 Who are the dotty people who write to problem pages and magazine colum- nists? People like me, I'm afraid. When I'm writing I feel like a happy hermit. But when I'm reading I feel sociable. I sent a Valen- tine card to Jeffrey Bernard when I was in my twenties, I have a recurring urge to send Matthew Parris fan mail and I have a bit of a crush on James Delingpole. Like most of you, I've never met any of them. Joining The Spectator is like moving to one of those villages where you are expected to wait 20 years before you are introduced to your neighbours. Still, I think this is just as well. The written word is comfortingly stat- ic, while flesh and blood people present you with an unnerving infinity of variables to make sense of. And when I spotted a picture byline of Mr Delingpole in another publication I had to cross my eyes to avoid disappointment.

I'm decorating the kitchen. Do you have anything that colour co-ordinates with egg, sausage, beans and chips?' As for problem pages, I once sent a let- ter to 'Dear Mary', asking how I could dis- suade our groundsman from offering to rub Vic on my chest in the winter and suntan oil in the summer. And although I haven't yet taken up her suggestion that I tell him that a friend of mine has a terminal chest complaint and that I get all tearful when anyone mentions chests, I do still ask myself what her advice would be on this question, or that. Last week a friend pre- sented me with shepherd's pie for lunch. It's the only dish which my parents ever allowed us to douse in tomato sauce. Under what circumstances, dear Mary, is one allowed to ask for tomato sauce in someone else's house? Is the answer, as I suppose, under no circumstances? But don't worry about that for now. It's yester- day's problem that concerns me at the moment.

I was walking in the garden, which is looking particularly beautiful at this time of year. All the daffodils and grape hyacinths are out along the lake and under the trees. But just as I was poised to pick some for my bedroom, I spotted three young women heading for the house. A wave of burglar panic swept over me as I'd left the doors open and no one was at home. 'Hello,' I called out. 'Are you looking for me?' They looked doubtful but waited for me to approach them. 'Can we use your toilet?' one of them asked. She looked more like Baby Spice than a burglar, but I hesitated. `We asked your neighbour if we could use his, but he said he was working,' she explained. I considered sending them in the direction of the rookery where, under simi- lar circumstances, I would have chosen to have a pee, but then, I thought, perhaps I just lack dignity. Besides, it seemed mean and base to tell a trio of young ladies they couldn't use the loo, so I agreed to show them inside.

`Nice house,' one of them said politely and I wished I had shut the sitting-room door. What was it she had spotted that was so nice? 'We've been walking in the fields all day,' she continued proudly. 'Oh, good,' I replied truthfully, as an all-day walk meant they must have been enjoying the countryside rather than throwing rubbish in it. Now they were lost, just a mile from home. I wasn't surprised. Most of the peo- ple who live in the big village down the road have never seen our little hamlet of faded pink brick houses, tucked away as it is, down a lane obscured from the view of passing motorists by a wild hedge and wilder trees. We live in a parallel reality, where the white noise of the outside world is muffled by the chaotic vegetation that grows so very lush in this damp oasis. I dread the spell being broken.

So, dear Mary, how could I have con- veyed both welcome and do not disturb to the strangers who invaded my tranquil afternoon?

Jeffrey Bernard will return next week