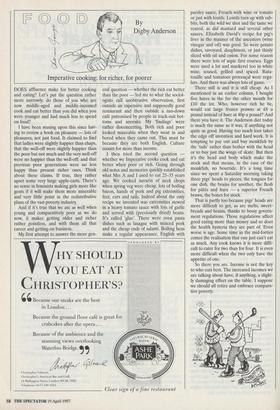 Imperative cooking: for richer, for poorer

DOES affluence make for better cooking and eating? Let's put the question rather more narrowly: do those of you who are now middle-aged and middle-incomed cook and eat better than you did when you were younger and had much less to spend on food? I have been musing upon this since hav- ing to review a book on pleasure — lots of pleasures, not just food. It claimed to find that ladies were slightly happier than chaps, that the well-off were slightly happier than the poor but not much and the very well-off were no happier than the well-off; and that previous poor generations were no less happy than present richer ones. Think about these claims. If true, they rather upset some very large apple-carts. There's no sense in feminists making girls more like gents if it will make them more miserable and very little point in the redistributive plans of the vast poverty industry. And if it's true that we ate as well when young and comparatively poor as we do now, it makes getting older and richer rather pointless, and with them all that career and getting-on business. My first attempt to answer the more gen- eral question — whether the rich eat better than the poor — led me to what the sociol- ogists call unobtrusive observation, first outside an expensive and supposedly good restaurant and then outside a run-down café patronised by people in track-suit bot- toms and anoraks. My 'findings' were rather disconcerting. Both rich and poor looked miserable when they went in and bored when they came out. This must be because they are both English. Culture counts for more than income. I then tried the second question — whether we Imperative cooks cook and eat better when poor or rich. Going through old notes and memories established what Mrs A and I used to eat 25-35 years ago. We cooked navarin of neck chops when spring veg were cheap, lots of boiling bacon, hands of pork and pig extremities, feet, ears and tails. Indeed about the only recipe we invented was extremities stewed in a heavy tomato sauce with lots of garlic and served with (previously dried) beans. It's called 'glue'. There were oven pasta dishes such as lasagne with minced pork and the cheap ends of salami. Boiling hens make a regular appearance, English with parsley sauce, French with wine or tomato or just with lentils. Lentils turn up with rab- bits, both the wild we shot and the tame we reared, as did mustard and several other sauces. Elizabeth David's recipe for pig's liver in the manner of the ancestors (wine vinegar and oil) was good. So were potato dishes, savoyard, dauphinois, or just thinly sliced with oil and onion. For some reason there were lots of aspic first courses. Eggs were used a lot and mackerel too in white wine, soused, grilled and spiced. Rata- touille and tomatoes provengal were regu- lars. And there was always lots of game. There still is and it is still cheap. As I mentioned in an earlier column, I bought five hares in the fur the other month for £10 the lot. Who, however rich he be, would eat large frozen prawns at £8 a pound instead of hare at 40p a pound? And there you have it. The Anderson diet today is much the same as it was, if anything not quite as good. Having too much loot takes the edge off invention and hard work. It is tempting to pay out and buy monkfish by the 'tails' rather than bother with the head or to buy just the wings of skate. But then it's the head and body which make the stock and that means, in the case of the monkfish, no bourride. It's a long time since we spent a Saturday morning taking three pigs' heads to pieces; the tongues for one dish, the brains for another, the flesh for pâtés and hure — a superior French brawn, the bones for stock. That is partly too because pigs' heads are more difficult to get, as are melts, sweet- breads and brains, thanks to bossy govern- ment regulations. Those regulations affect good eating more than money and so does the health hysteria they are part of. Even worse is age. Some time in the mid-forties comes the realisation that one just can't eat as much. Any cook knows it is more diffi- cult to cater for two than for four. It is even more difficult when the two only have the appetite of one. So there you are. Income is not the key to who eats best. The increased incomes we are talking about have, if anything, a slight- ly damaging effect on the table. I suppose we should all retire and embrace compara- tive poverty.