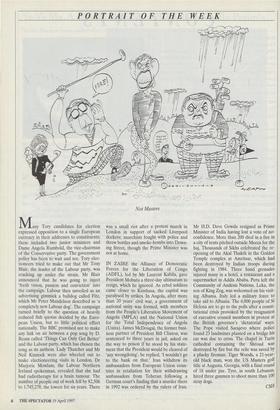 Page 6, 19 April 1997 — PORTRAIT OF THE WEEK Not Masters M any Tory candidates for
Close

PORTRAIT OF THE WEEK Not Masters M any Tory candidates for

election expressed opposition to a single European currency in their addresses to constituents; these included two junior ministers and Dame Angela Rumbold, the vice-chairman of the Conservative party. The government policy has been to wait and see. Tory elec- tioneers tried to make out that Mr Tony Blair, the leader of the Labour party, was cracking up under the strain. Mr Blair announced that he was going to inject `fresh vision, passion and conviction' into the campaign. Labour then unveiled as an advertising gimmick a bulldog called Fitz, which Mr Peter Mandelson described as 'a completely new Labour dog'. The campaign turned briefly to the question of heavily reduced fish quotas decided by the Euro- pean Union, but to little political effect nationally. The BBC promised not to make any link on air between a pop song by D. Ream called 'Things Can Only Get Better' and the Labour party, which has chosen the song as its anthem. Lady Thatcher and Mr Neil Kinnock were also wheeled out to make electioneering visits in London. Dr Marjorie Mowlam, the Labour Northern Ireland spokesman, revealed that she had had radiotherapy for a brain tumour. The number of people out of work fell by 82,506 to 1,745,278, the lowest for six years. There was a small riot after a protest march in London in support of sacked Liverpool dockers; anarchists fought with police and threw bottles and smoke-bombs into Down- ing Street, though the Prime Minister was not at home.

IN ZAIRE the Alliance of Democratic Forces for the Liberation of Congo (ADFL), led by Mr Laurent Kabila, gave President Mobutu a three-day ultimatum to resign, which he ignored. As rebel soldiers came closer to Kinshasa, the capital was paralysed by strikes. In Angola, after more than 20 years' civil war, a government of national unity was formed, with members from the People's Liberation Movement of Angola (MPLA) and the National Union for the Total Independence of Angola (Unita). James McDougal, the former busi- ness partner of President Bill Clinton, was sentenced to three years in jail; asked on the way to prison if he stood by his state- ment that the President would be cleared of `any wrongdoing', he replied, 'I wouldn't go to the bank on that.' Iran withdrew its ambassadors from European Union coun- tries in retaliation for their withdrawing ambassadors from Teheran following a German court's finding that a murder there in 1992 was ordered by the rulers of Iran. Mr H.D. Deve Gowda resigned as Prime Minister of India having lost a vote of no- confidence. More than 200 died in a fire in a city of tents pitched outside Mecca for the haj. Thousands of Sikhs celebrated the re- opening of the Altai Thakth in the Golden Temple complex at Amritsar, which had been destroyed by Indian troops during fighting in 1984. Three hand grenades injured many in a hotel, a restaurant and a supermarket in Addis Ababa. Peru left the Community of Andean Nations. Leka, the son of King Zog, was welcomed on his visit- ing Albania. Italy led a military force to take aid to Albania. The 6,000 people of St Helena are to go to the polls after a consti- tutional crisis provoked by the resignation of executive council members in protest at the British governor's 'dictatorial' ways. The Pope visited Sarajevo where police found 23 landmines planted on a bridge his car was due to cross. The chapel in Turin cathedral containing the Shroud was destroyed by fire but the relic was saved by a plucky fireman. Tiger Woods, a 21-year- old black man, won the US Masters golf title at Augusta, Georgia, with a final round of 18 under par. Tyre, in south Lebanon, hired three gunmen to shoot more than 100 stray dogs.