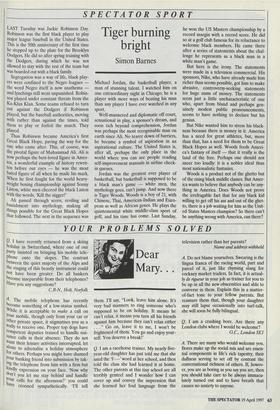 LAST Tuesday was Jackie Robinson Day. Robinson was the first black player to play major league baseball in the United States. This is the 50th anniversary of the first time he stepped up to the plate for the Brooklyn Dodgers. He did so after spring training with the Dodgers, during which he was not allowed to stay with the rest of the team but was boarded out with a black family.

Segregation was a way of life, black play- ers were confined to the Negro leagues the word Negro itself is now anathema and lynchings still went unpunished. Robin- son played under constant threats from the Ku-Klux Klan. Some teams refused to turn out against the Dodgers if Robinson played, but the baseball authorities, moving with rather than against the times, told them to play or forfeit the match. They played.

Thus Robinson became America's first Great Black Hope, paving the way for the one who came after. This, of course, was the pivotal figure of Muhammad Ali. Ali is now perhaps the best-loved figure in Amer- lea, a wonderful example of history rewrit- ten before our eyes — he was the most hated figure of all when he made his mark. When he first fought for the world heavy- weight boxing championship against Sonny Liston, white men cheered the black Liston with the words, 'Kill the nigger!'

Ali passed through scorn, reviling and banishment into mythology, making all things possible for the Great Black Hopes that followed. The next in the sequence was Michael Jordan, the basketball player, a man of stunning talent. I watched him on one extraordinary night in Chicago; he is a player with more ways of beating his man than any player I have ever watched in any sport.

Well-mannered and diplomatic off court, sensational in play, a sponsor's dream, and soon rich beyond comprehension, Jordan was perhaps the most recognisable man on earth since Ali. No tearer down of barriers, he became a symbol of aspiration in an aspirational culture. The United States is, after all, perhaps the only place in the world where you can see people reading self-improvement manuals in airline check- in queues. Jordan was the greatest ever player of basketball, but basketball is supposed to be a black man's game — white men, the mythology goes, can't jump. And now there is Tiger Woods. Woods is a boy of 21, with Chinese, Thai, American-Indian and Euro- pean as well as African genes. He plays the quintessential white middle-class sport of golf, and his time has come. Last Sunday, he won the US Masters championship by a record margin with a record score. He did so at a golf club famous for its reluctance to welcome black members. He came there after a series of statements about the chal- lenge he represents as a black man in a white man's game.

But here is the irony. The statements were made in a television commercial. His sponsors, Nike, who have already made him richer than seems possible, got him to make abrasive, controversy-seeking statements for huge sums of money. The statements seem just a little uncharacteristic of one who, apart from bland and perhaps gen- uinely modest public pronouncements, seems to have nothing to declare but his genius.

But Nike wanted him to stress his black- ness because there is money in it. America has a need for great athletes, but, more than that, has a need for them to be Great Black Hopes as well. Woods feeds Ameri- ca's fantasy of itself — that it really is the land of the free. Perhaps one should not sneer too loudly: it is a nobler ideal than most nationalistic fantasies.

Woods is a product not of the ghetto but of the rising black middle classes. But Amer- ica wants to believe that anybody can be any- thing in America. Does Woods not prove the irrefragable fact that for any black kid willing to get off his ass and out of the ghet- to, there is a job waiting for him as the Unit- ed States Masters champion? So there can't be anything wrong with America, can there?