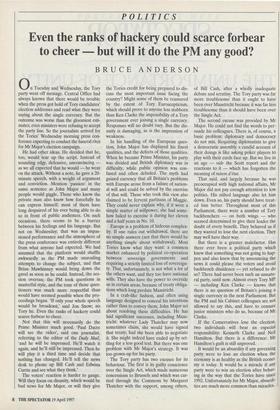 Even the ranks of hackery could scarce forbear to cheer but will it do the PM any good?

0 n Tuesday and Wednesday, the Tory party went off message. Central Office had always known that there would be trouble when the press got hold of Tory candidates' election addresses and read what they were saying about the single currency. But the outcome was worse than the gloomiest esti- mates; even ministers were refusing to accept the party line. So the journalists arrived for the Tories' Wednesday morning press con- ference expecting to conduct the funeral rites for Mr Major's election campaign.

He had other ideas. He decided that he, too, would tear up the script. Instead of sounding edgy, defensive, unconvincing as we all expected that he would — he went on the attack. Without a note, he gave a 20- minute speech, with a weight of argument and conviction. Mention 'passion' in the same sentence as John Major and many people would giggle. Those who know the private man also know how forcefully he can express himself; most of them have long despaired of his ever being able to do so in front of public audiences. On such occasions, there seems to be a barrier between his feelings and his language. But not on Wednesday; that was an impas- sioned performance and the atmosphere of the press conference was entirely different from what anyone had expected. We had assumed that the platform would shuffle awkwardly as the PM made unavailing attempts to change the subject, and that Brian Mawhinney would bring down the gavel as soon as he could. Instead, the ses- sion overran; the PM took questions in masterful style, and the tone of those ques- tioners was much more respectful than would have seemed possible when the pro- ceedings began. 'If only your whole speech would be broadcast,' said Jon Snow; no Tory he. Even the ranks of hackery could scarce forbear to cheer.

Not that this will necessarily do the Prime Minister much good. 'Paul Dacre will see the video', said one journalist, referring to the editor of the Daily Mail, `and he will be impressed. He'll watch it again, and he'll still be impressed. Then he will play it a third time and decide that nothing has changed. He'll tell the news desk to phone up Bill Cash and Edwina Currie and see what they think.'

The voters' reaction is harder to gauge. Will they focus on disunity, which would be bad news for Mr Major, or will they give the Tories credit for being prepared to dis- cuss the most important issue facing the country? Might some of them be reassured by the extent of Tory Euroscepticism, which should prove to anyone less stubborn than Ken Clarke the impossibility of a Tory government ever joining a single currency. Responses will no doubt vary. But the dis- unity is damaging, as is the impression of weakness.

In his handling of the European ques- tion, John Major has displayed his finest qualities, and the defects of those qualities. When he became Prime Minister, his party was divided and British diplomacy was in difficulty, while public opinion was con- fused and often deluded. The myth had gained currency that all Britain's problems with Europe arose from a failure of nation- al will and could be solved by the exercise of that will. Those who took this view also claimed to be fervent partisans of Maggie. They could never explain why, if it were a simple matter of willpower, she had some- how failed to exercise it during her eleven and a half years in No. 10.

Europe is a problem of hideous complex- ity. If one rules out withdrawal, there are no simple answers (not that there would be anything simple about withdrawal). Most Tories know what they want: a common market enhanced by political co-operation between sovereign governments and requiring a strictly limited loss of sovereign- ty. That, unfortunately, is not what a lot of the others want, and they too have national wills. They also have the power to override us in certain areas, because of treaty obliga- tions which long predate Maastricht.

In a crab-like fashion, and often using language designed to conceal his intentions rather than to convey them, John Major set about resolving these difficulties. He has had significant successes, including Maas- tricht: whatever Lady Thatcher may now sometimes claim, she would have signed that treaty, had she been able to negotiate it. She might indeed have ended up by set- tling for a less good text. But there was one problem with Mr Major's strategy. It was too grown-up for his party.

The Tory party has two excuses for its behaviour. The first is its guilty conscience over the Single Act, which made numerous concessions to Brussels and which was car- ried through the Commons by Margaret Thatcher with the support, among others, of Bill Cash, after a wholly inadequate debate and scrutiny. The Tory party was far more troublesome than it ought to have been over Maastricht because it was far less troublesome than it should have been over the Single Act.

The second excuse was provided by Mr Major. He could not find the words to per- suade his colleagues. There is, of course, a basic problem: diplomacy and democracy do not mix. Requiring diplomatists to give a democratic assembly a candid account of their doings is like asking poker players to play with their cards face up. But we live in an age — vide the Scott report and the reactions to it — which has forgotten the meaning of raison d'etat.

That said, and largely because he was preoccupied with high national affairs, Mr Major did not pay enough attention to low politics. His stilted language also let him down. Even so, his party should have treat- ed him better. Throughout most of this Parliament, there were a number of Tory backbenchers — on both wings — who seemed determined to give their leader the doubt of every benefit. They behaved as if they wanted to lose the next election. They may well have their way.

But there is a greater malefactor. Has there ever been a political party which knew that something was not going to hap- pen and also knew that by announcing the news it could please the voters and avoid backbench dissidence — yet refused to do so? There had never been such an unnatu- ral party, until now. Almost every Tory MP — including Ken Clarke — knows that there is no question of Britain's joining a single currency in the next Parliament. But the PM and his Cabinet colleagues are not allowed to say this, and have to censure junior ministers who do so, because of Mr Clarke.

If the Conservatives lose the election, two individuals will bear an especial responsibility: Kenneth Clarke and Neil Hamilton. But there is a difference: Mr Hamilton's guilt is still unproved.

It would be an absurdity if any governing party were to lose an election when the economy is as healthy as the British econo- my is today. It would be a miracle if any party were to win an election after behav- ing in the way that the Tories have since 1992. Unfortunately for Mr Major, absurdi- ties are much more common than miracles.