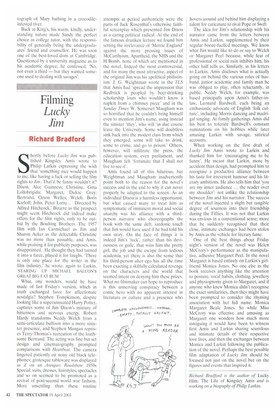 Shortly before Lucky Jim was published Kingsley Amis wrote to Philip Larkin expressing the wish that 'something nice would happen to me, like having a fuck or selling the film rights to Jim. That'd be funny wouldn't it? Dixon, Alec Guinness; Christine, Gina Lollobrigida; Margaret, Dulcie Grey; Bertrand, Orson Welles; Welch, Boris Karloff; John, Peter Lorre... Directed by Alfred Hitchcock.' Bizarre as the prospect might seem Hitchcock did indeed make offers for the film rights, only to be outbid by the Boulting Brothers. The 1957 film with Ian Carmichael as Jim and Sharon Acker as the delectable Christine was no more than passable, and Amis, while praising it for publicity purposes, was disappointed. He thought they had turned it into a farce, played it for laughs. 'There is only one place for the writer in the film industry,' he wrote, again to Larkin, 'STARING UP MICHAEL BALCON'S GREAT BIG FAT BUM.'

What, one wonders, would he have made of last Friday's version, which in truth exchanged farce for affectionate nostalgia? Stephen Tompkinson, despite looking like a superannuated Harry Potter, captures some of Jim Dixon's mixture of bitterness and nervous energy. Robert Hardy transforms Neddy Welch from a semi-articulate buffoon into a more sinister presence, and Stephen Mangan reprises Terry-Thomas's recreation of the loathsome Bertrand. The acting was fine but set design and cinematography prompted comparisons with Heartbeat. The camera lingered patiently on noisy old black telephones; grotesque tableware was displayed as if on an Antiques Roadshow 1950s Special; suits, dresses, hairstyles, spectacles and so on seemed to be promoted as a revival of post-second world war fashion. More unsettling than these routine attempts at period authenticity were the parts of Jack Rosenthal's otherwise faithful screenplay which presented Jim Dixon as a caring political radical. At the end of the famous drunken lecture we found him setting the irrelevance of Nerrie England' against the more pressing issues of McCarthyism, Apartheid, the NHS and the 11 Bomb, none of which are mentioned in the novel. Indeed the most controversial, and for many the most attractive, aspect of the original Jim was his apolitical philistinism. J. G. Weightman wrote in the TLS that Amis had 'spread the impression that Redbrick is peopled by beer-drinking scholarship louts who wouldn't know a napkin from a chimney piece' and in the Sunday Times W. Somerset Maugham was so horrified that he couldn't bring himself even to mention Jim's name, using instead the sinister 'they', who will 'in due course leave the University. Some will doubtless sink back into the modest class from which they emerged; some will take to drink, some to crime, and go to prison.' Others, however, will infiltrate the press, the education system, even parliament, and Maugharn felt 'fortunate that I shall not live to see it'.

Amis found all of this hilarious, but Weightman and Maugham inadvertently point both to the reason for the novel's success and in the end to why it can never properly be adapted to the screen. As an individual Dixon is a harmless opportunist, but what caused many to treat him as symptomatic of imminent moral and social anarchy was his alliance with a thirdperson narrator who choreographs the book with the same deft, sardonic touch that Jim would have used if he had told his own story. On the face of things it is indeed Jim's 'luck', rather than his deviousness or guile, that wins him the pretty girl, the job and the escape from tedious academia, yet there is also the sense that his third-person alter ego has all the time been exacting a skilfully calculated revenge on the characters and the world that seemed intent on denying him these prizes. What no filmmaker can hope to reproduce is this unnerving conspiracy between a comic hero with no apparent interest in literature or culture and a presence who hovers around and behind him displaying a talent for caricature to rival Pope or Swift The idea for Jim's relationship with his narrator came from the letters between Amis and Larkin, supplemented by their regular booze-fuelled meetings. We know what Jim would like to do or say to Welch or Margaret Peel because, while fear of professional or social ruin inhibits him, his other half tells us. Similarly, in his letters to Larkin, Amis discloses what is actually going on behind the various roles of husband, junior academic and family man he was obliged to play, often reluctantly, in public. Neddy Welch, for example, was based principally upon Amis's father-inlaw, Leonard Bardwell. each being an enthusiastic advocate of English 'folk culture', including Morris dancing and madrigal singing. At family gatherings Amis did his best to tolerate Bardwell's constant ruminations on his hobbies while later amusing Larkin with savage, satirical accounts.

When working on the first draft of Lucky Jim Amis wrote to Larkin and thanked him for 'encouraging me to be funny'. He meant that Larkin, more by accident than design, had prompted him to recognise a productive alliance between his taste for irreverent humour and his literary ambitions. He also tells him that 'you are my inner audience the reader over my shoulder': not unlike the relationship between Jim and his narrator. The success of the novel injected a slight but tangible degree of sourness into their friendship during the Fifties. It was not that Larkin was envious in a conventional sense; more that he suddenly recognised that their close, intimate exchanges had been stolen by Amis as the vehicle for literary fame.

One of the best things about Friday night's version of the novel was Helen McCrory's performance as the manipulative, adhesive Margaret Peel. In the novel Margaret is based entirely on Larkin's girlfriend Monica Jones. No one else in the book receives anything like the attention to posture, vocal habits, clothing, jewellery and physiognomy given to Margaret, and if anyone who knew Monica didn't recognise the exact similarities, then they might have been prompted to consider the rhyming association with her full name: Monica Margaret Beale Jones. So while Miss McCrory was effective and amusing as Margaret one wonders how much more intriguing it would have been to witness first Amis and Larkin sharing scurrilous and intimate details of their respective love lives, and then the exchanges between Monica and Larkin following the publication of the novel. Perhaps the best possible film adaptation of Lucky Jim should be focused not just on the novel but on the figures and events that inspired it.

Richard Bradford is the author of Lucky Him: The Life of Kingsley Amis and is working on a biography of Philip Larkin.