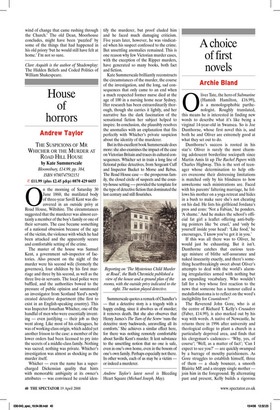 THE SUSPiCiONS OF MR WHiCHER OR THE MURDER AT ROAD HiLL HOUSE by Kate Summerscale Bloomsbury, £14.99, pp. 384, ISBN 9780747582151 ✆ £11.99 (plus £2.45 p&p) 0870 429 6655 On the morning of Saturday 30 June 1860, the mutilated body of three-year Savill Kent was discovered in an outside privy at Road House, Wiltshire. The circumstances suggested that the murderer was almost certainly a member of the boy’s family or one of their servants. The case became something of a national obsession because of the age of the victim, the violence with which he had been attacked and the apparently secure and comfortable setting of the crime.

The master of the house was Samuel Kent, a government sub-inspector of factories. Also present on the night of the murder were his second wife (formerly the governess), four children by his first marriage and three by his second, as well as the three live-in servants. The local police were baffled, and the authorities bowed to the pressure of public opinion and summoned an investigator from Scotland Yard’s newly created detective department (the first to exist in an English-speaking country). This was Inspector Jonathan Whicher, one of the handful of men who were essentially inventing — even justifying — their job as they went along. Like most of his colleagues, he was of working-class origin, which added yet another frisson to the case: a member of the lower orders had been licensed to pry into the secrets of a middle-class family. Nothing was sacred; nothing was private. Whicher’s investigation was almost as shocking as the murder itself.

Whicher — even the name has a supercharged Dickensian quality that hints with memorable ambiguity at its owner’s attributes — was convinced he could iden tify the murderer, but proof eluded him and he faced much damaging criticism. Five years later, however, he was vindicated when his suspect confessed to the crime. But unsettling anomalies remained. This is one reason why few Victorian murder cases, with the exception of the Ripper murders, have generated so many books, both fact and fiction.

Kate Summerscale brilliantly reconstructs the circumstances of the murder, the course of the investigation, and the long, sad consequences that only came to an end when a much respected former nurse died at the age of 100 in a nursing home near Sydney. Her research has been extraordinarily thorough, though she carries it lightly, and her narrative has the dark fascination of the sensational fiction her subject helped to inspire. In conclusion, she plausibly resolves the anomalies with an explanation that fits perfectly with Whicher’s private suspicion about the identity of the murderer.

But in this excellent book Summerscale does more: she also examines the impact of the case on Victorian Britain and traces its cultural consequences. Whicher set in train a long line of fictional police detectives, from Sergeant Cuff and Inspector Bucket to Morse and Rebus. The Road House case — the prosperous family, the closed circle of suspects and the country-house setting —provided the template for the type of detective fiction that dominated the last century and still flourishes.

Summerscale quotes a remark of Chandler’s — that a detective story is a tragedy with a happy ending, since it absolves us of murder; it removes death. But she also observes that Henry James’s The Turn of the Screw ‘runs the detective story backwards, unravelling all its comforts.’ She achieves a similar effect here, for there was nothing remotely comfortable about Saville Kent’s murder. It lent substance to the unsettling notion that no one is safe, even in one’s own home, even in the bosom of one’s own family. Perhaps especially not there. In other words, each of us may be a victim — or indeed a murderer.