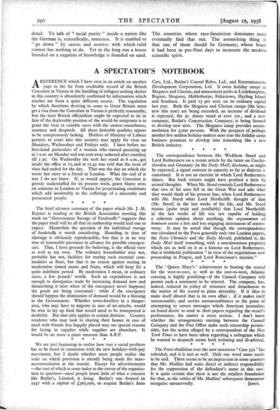 AREFERENCE which I have seen in an article on another page to the far from creditable record of the British Consulate in Vienna in the handling of refugees seeking shelter in this country is abundantly confirmed by information which reaches me from a quite different source. The regulation by which Austrians desiring to come to Great Britain must get a visa from the Consulate in Vienna is perfectly reasonable, but the least British officialdom might be expected to do in face of the deplorable position of the would-be emigrants is to grant the visas in suitable cases with the utmost smoothness, courtesy and despatch. All those desirable qualities appear to be conspicuously lacking. Holders of Ministry of Labour permits to come into this country may apply for visas on Mondays, Wednesdays and Fridays only. I have before me first-hand particulars of a woman who started queueing up at 7 a.m. on Monday and was sent away unheard after standing till I.30. On Wednesday she took her stand at 6 a.m., got inside the office at 12, and at 12.45 was told that the issue of visas had ended for the day. That was the day on which she wrote her story to a friend in London. What the end of it was I do not know. If, as would appear, the Consulate is grossly understaffed for its present work, grave blame rests on someone in London or Vienna for perpetuating conditions which add intolerably to the sufferings of a miserable and persecuted people.

* * * * The brief advance summary of the paper which Mr. J. M. Keynes is reading at the British Association meeting this week on " Government Storage of Foodstuffs" suggests that the paper itself will be all that its authorship would lead one to expect. Meanwhile the question of the individual storage of foodstuffs is worth considering. Hoarding in time of shortage is obviously reprehensible, but that is in no way- true of reasonable provision in advance for possible emergen- cies. That, I have grounds for believing, is the official view as well as my own. The ordinary householder may not, probably has not, facilities for storing such essential com- modities as flour, but that is no reason against storing in moderation tinned meats and fruits, which will keep for a quite indefinite period. By moderation I mean, in ordinary cases, a few pounds' worth. Such an expenditure is not enough to disorganise trade by increasing demand now and diminishing it later when (if the emergency never happens) the goods are being consumed : while if the emergency should happen the diminution of demand would be a blessing to the Government. Whether town-dwellers in a danger- area, who may have to migrate in case of air-attacks, would be wise to lay up food that would need to be transported is doubtful. But that only applies to certain districts. Country residents who may look to sharing their homes in case of need with friends less happily placed may see special reasons for laying in supplies while supplies are abundant. It would be no more a panic measure than A.R.P. * * * * We are just beginning to realise how vast a social problem has to be faced in connexion with the new holidays-with-pay- movement, but I doubt whether most people realise the scale on which provision is already being made for mass- accommodation at the seaside. Except for advertisements —the cost of which is some index to the extent of the organisa- tion in question—most people know little of what a concern like Butlin's, Limited, is doing. Butlin's was formed in 1937 with a capital of £365,000, to acquire Butlin's Auto Cars, Ltd., Butlin's Coastal Rides, Ltd., and Entertainments Development Corporation, Ltd. It owns holiday camps at Skegness and Clacton, and amusement parks at Littlehampton, Bognor, Skegness, Mablethorpe, Felixstowe, Hayling Island and Southsea. It paid 15 per cent. on its ordinary capital last year. Both the Skegness and Clacton camps (the latter new this year) are being extended, an increase of dividend is expected, the 5s. shares stand at over 12s., and a new company, Butlin's Construction Company, is being formed to develop new sites. The Skegness camp provides accom- modation for 2,000 persons. With the prospect of perhaps another five million holiday-makers next year the holiday camp business promises to develop into something like a new British industry. * * * * The correspondence between Mr. Wickham Steed and Lord Rothermere on a recent article by the latter on Czecho- slovakia and Germany (in the Daily Mail) discloses, as might be expected, a signal contrast in capacity so far as dialectic is concerned. It is not an exercise in which Lord Rothermere shines. But both writers might have profited a little by second thoughts. When Mr. Steed reminds Lord Rothermere that two of his sons fell in the Great War and asks what they would think of his present line, when Lord Rothermere tells Mr. Steed what Lord Northcliffe thought of him (Mr. Steed) in the last weeks of his life, and Mr. Steed rejoins (quite truly and justifiably) that Lord Northcliffe in the last weeks of life was not capable of holding a coherent opinion about anything, the argumentum ad hominem seems a less and less engaging instrument of contro- versy. It may be noted that though the correspondence was circulated to the Press generally only two London papers, the News Chronicle and the Daily Herald, published it, the Daily Mail itself remarking, with a sanctimonious propriety which sits as well on it as a kimono on Lord Rothermere, that it withholds publication " in view of the negotiations now proceeding in Prague, and Lord Runciman's mission." * * * * The ' Queen Mary's ' achievement in beating the record for the west-to-east, as well as the east-to-west, Atlantic crossing is highly gratifying—if the Cunard Company will permit such a sentiment to be uttered. The company, has, indeed, reduced its policy of reticence and detachment in the matter of the record to plain absurdity. If it likes to make itself absurd that is its own affair ; if it makes itself unreasonable, and carries unreasonableness to the point of attempting to censor messages which American journalists on board desire to send to their papers regarding the vessel's performance, the matter is more serious. I don't know whether the arrangements existing between the Cunard Company and the Post Office make such censorship permis- sible, but the action alleged by a correspondent of the New York Times to have been taken regarding a radiogram which he wanted to despatch seems both irritating and ill-advised. * * * * The Press ebullition over the now notorious " Case 35A " has subsided, and it is just as well. Only one word more needs to be said. There seems to be an impression in some quarters that Mr. Mullins had some direct or indirect responsibility for the suppression of the defendant's name in this case. It is quite certain that there is not the smallest foundation for that, as the critics of Mr. Mullins' subsequent demeanour