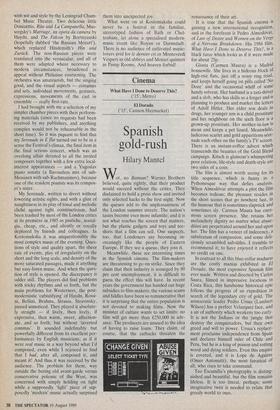 Hilary Mantel Wot, no Batman? Warner Brothers believed, quite rightly, that their product would succeed without the critics. They disdained to hold a press show and invited only selected hacks to the first night. Now the queues add to the unpleasantness of the London summer streets. The nation's tastes become ever more infantile; and it is not what reaches the screen that matters, but the plastic gadgets and toys and tee- shirts that a film can sell. One suspects, too, that Londoners are becoming in- creasingly like the people of Eastern Europe. If they see a queue, they join it.

Meanwhile, these are interesting times in the Spanish cinema. The film-makers are threatening to go on strike. Since they claim that their industry is scourged by 80 per cent unemployment, it is difficult to guess the effect this will have. In recent years the government has handed out huge subsidies to film-makers; the various scams and fiddles have been so remunerative that it is surprising that the entire population is not devoted to making films. Now the minister of culture wants to set limits: no film will get more than £250,000 in adv- ance. The producers are unused to the idea of having to raise loans. They claim, of course, that the cutbacks threaten the renaissance of their art.

It is true that the Spanish cinema is gaining a new international recognition, and in the forefront is Pedro Almodovar, of Law of Desire and Women on the Verge of a Nervous Breakdown. His 1984 film, What Have I Done to Deserve This?, is a black farce which looks as if it were made for about 25p. Gloria (Carmen Maura) is a Madrid housewife. She lives in a hideous block of high-rise flats, just off a noisy ring road, and keeps herself going on pills called 'No Doze' and the occasional whiff of some handy solvent. Her husband is a taxi-driver and a slob, who has skills as a forger and is planning to produce and market the letters of Adolf Hitler. Her elder son deals in drugs, her younger son is a child prostitute and her neighbour on the sixth floor is a grown-up prostitute. Her mother-in-law is mean and keeps a pet lizard. Meanwhile, ludicrous scarlet and gold apparitions sere- nade each other on the family's TV screen. There is an instant-coffee advert which transcends the beauties of the Gold Blend campaign. Kitsch is glamour's whimpering poor relation; life-style and death-style are two sides of a coin.

The film is almost worth seeing for its title sequence, which is funny ina Pythonesque way that defies analysis. When Almodevar attempts a plot the film becomes tedious; the pleasure resides in the short scenes that go nowhere fast, in the humour that is sometimes slapstick and sometimes sly. Carmen Maura has enor- mous screen presence. She retains her melancholy dignity no matter what absur- ditieS are perpetrated around her and upon her. The film has a veneer of indecency, a substratum of compassion, and some deli- ciously scrambled sub-titles. I tremble to recommend it; to have enjoyed it reflects no credit on one.

In contrast to all this blue-collar madness are the costly manias exhibited in El Dorado, the most expensive Spanish film ever made. Written and directed by Carlos Saura, filmed in impressive locations in Costa Rica, this handsome historical epic follows the progress of an expedition in search of the legendary city of gold. The aristocratic leader Pedro Ursua (Lambert Wilson) has a perfect Velazquez face, and a air of authority which weakens too early. It is not the Indians or the jungle that destroy the conquistadors, but their own greed and will to power. Ursua's replace- ment proclaims independence from Spain and declares himself ruler of Chile and Peru, but he is a king of poison and rotting wood and dying soldiers. Even this empire is coveted, and it is Lope de Aguirre (Omer Antonutti), the most fanatical of all, who rises to take command.

Teo Escamilla's photography is disting- uished and beautiful, but the film remains lifeless. It is too literal, perhaps; some imaginative twist is needed to relate that greedy world to ours.