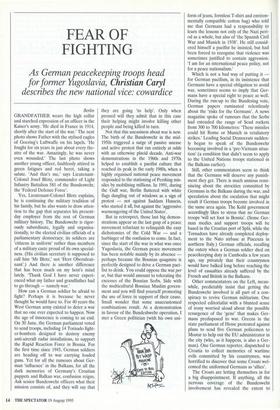 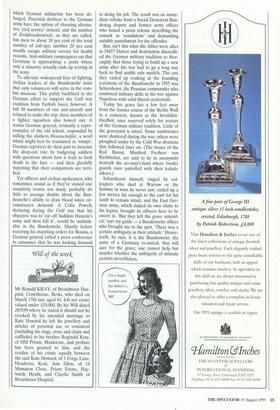 Berlin GRANDFATHER wears the high collar and starched expression of an officer in the Kaiser's army. 'He died in France in 1914, shortly after the start of the war.' The next photo shows Father with the stylised eagles of Goering's Luftwaffe on his lapels. 'He fought for six years in just about every the- atre of the war. Amazingly, he was never even wounded.' The last photo shows another young officer, faultlessly attired in green fatigues and red beret, taking a salute. 'And that's me,' says Lieutenant- Colonel Josef Blotz, commander of Light Infantry Battalion 581 of the Bundeswehr, the 'Federal Defence Force'.

Yes, Lieutenant-Colonel Blotz explains, he is continuing the military tradition of his family, but he also wants to draw atten- tion to the gap that separates his present- day employer from the rest of German military history. The Bundeswehr is rigor- ously subordinate, legally and organisa- tionally, to the elected civilian officials of a parliamentary democracy; its soldiers are 'citizens in uniform' rather than members of a military caste proud of its own special- ness. (His civilian secretary is supposed to call him `Mr Blotz,' not 'Herr Oberstleut- nant'.) And there is another difference that has been much on my host's mind lately. 'Thank God I have never experi- enced what my father and grandfather had to go through — namely war.'

How can a German soldier be afraid to fight? Perhaps it is because he never thought he would have to. For 40 years the West German army existed to deter a war that no one ever expected to happen. Now the age of innocence is coming to an end. On 30 June, the German parliament voted to send troops, including 14 Tornado fight- er-bombers designed to destroy enemy anti-aircraft radar installations, to support the Rapid Reaction Force in Bosnia. For the first time since 1945, German soldiers are heading off to war carrying loaded guns. Yet for all the rumours about Ger- man 'influence' in the Balkans, for all the dark memories of Germany's Croatian puppets and Balkan war, confusion reigns. Ask senior Bundeswehr officers what their mission consists of, and they will say that they are going `to help'. Only when pressed will they admit that in this case their helping might involve killing other people and being killed in turn.

Not that this uneasiness about war is new. The birth of the Bundeswehr in the mid- 1950s triggered a surge of passive unease and active protest that ran entirely at odds with an otherwise placid decade. Anti-war demonstrations in the 1960s and 1970s helped to establish a pacifist culture that reached its peak in the early 1980s, when a highly organised national peace movement responded to the stationing of Pershing mis- siles by mobilising millions. In 1991, during the Gulf war, Berlin fluttered with white flags dangling out of windows as a sign of protest — not against Saddam Hussein, who started it all, but against the 'aggressive warmongering of the United States'.

But in retrospect, those last big demon- strations appear as the last gasp of a peace movement reluctant to relinquish the easy dichotomies of the Cold War — and a harbinger of the confusion to come. In fact, since the start of the war in what was once Yugoslavia, the German peace movement has been notable mainly by its absence — perhaps because the Bosnian quagmire is perfectly designed to drive a German paci- fist to drink. You could oppose the war per se, but that would amount to tolerating the excesses of the Bosnian Serbs. Side with the multicultural Bosnian Muslim govern- ment and you will find yourself promoting the use of force in support of their cause. Small wonder that some unaccustomed combinations result. At a demonstration in favour of the Bundeshwehr operation, I met a Green politician (with his own uni- form of jeans, formless T-shirt and environ- mentally compatible cotton bag) who told me that Germans had a responsibility to learn the lessons not only of the Nazi peri- od as a whole, but also of 'the Spanish Civil War and Munich in 1938'. He still consid- ered himself a pacifist he insisted, but had been forced to recognise that violence was sometimes justified to contain aggression. 'I am for an international peace policy, not for a peace nationalism.'

During the run-up to the Bundestag vote, German papers ruminated relentlessly about the 'risks for the Germans'. A news magazine spoke of rumours that the Serbs had extended the range of Scud rockets from 300 to 700 kilometres: 'These missiles could hit Rome or Munich in retaliatory strikes.' Leading Social Democrats sudden- ly began to speak of the Bundeswehr becoming involved in a 'pre-Vietnam situa- tion' (a condition that didn't seem to apply to the United Nations troops stationed in the Balkans earlier).

Still, other commentators seem to think that the Germans will deserve any punish- ment they get. There is much anxious remi- niscing about the atrocities committed by Germans in the Balkans during the war, and speculation about the escalation that might result if German troops become involved in the same area again. The Kohl government accordingly likes to stress that no German troops 'will set foot in Bosnia'. (Some Ger- man medics and support troops will be based in the Croatian port of Split, while the Tornadoes have already completed deploy- ment to the Nato airbase at Piacenza in northern Italy.) German officials, recalling the outcry when a German soldier died on peacekeeping duty in Cambodia a few years ago, say privately that their countrymen would have balked long before reaching the level of casualties already suffered by the French and British in the Balkans.

Other commentators on the Left, mean- while, predictably insist that getting the Bundeswehr involved is all part of a con- spiracy to revive German militarism. One respected editorialist with a blunted sense of irony worried aloud about the possible resurgence of the 'gene' that makes Ger- mans predisposed to war. Greens in the state parliament of Hesse protested against plans to send five German policemen to Mostar to help out the EU administrator in the city (who, as it happens, is also a Ger- man). One German reporter, dispatched to Croatia to collect memories of wartime evils committed by his countrymen, was horrified to discover that some Croats wel- comed the uniformed Germans as 'allies'.

The Croats are letting themselves in for a big disappointment. If anything, all the nervous coverage of the Bundeswehr involvement has revealed the extent to which German militarism has been de- fanged. Potential draftees to the German army have the option of choosing alterna- tive 'civil service' instead, and the number of Zivildienstleistende, as they are called, has risen to about 30 per cent of the total number of call-ups; another 20 per cent usually escape military service for health reasons. Anti-military campaigners say that Germany is approaching a point where only a minority actually ends up serving in the army.

To alleviate widespread fear of fighting, civilian leaders of the Bundeswehr insist that only volunteers will serve in the com- bat missions. This policy backfired in the German effort to support the Gulf war coalition from Turkish bases, however. A full 50 members of one anti-aircraft unit refused to make the trip; three members of a fighter squadron also bowed out. A senior German general, evidently a repre- sentative of the old school, responded by calling the shirkers Hosenscheifier, a word which might best be translated as 'wimps'. German reporters do their part to increase the drop-out rate by badgering soldiers with questions about how it feels to look death in the face — and then gleefully reporting that their compatriots are terri- fied.

Yet officers and civilian spokesmen, who sometimes sound as if they've visited one sensitivity course too many, probably do little to assuage doubts about the Bun- deswehr's ability to draw blood when cir- cumstances demand. A Colin Powell, declaring during the Gulf war that his objective was to 'cut off Saddam Hussein's army and then kill it', would be unthink- able in the Bundeswehr. Shortly before receiving his marching orders for Bosnia, a German general called a press conference to announce that he was looking forward

to doing his job. The result was an imme- diate rebuke from a Social Democrat Bun- destag deputy and former army officer who issued a press release describing the remark as 'scandalous' and demanding suitable punishment for the offender.

But, isn't this what the Allies were after in 1945? Defeat and destruction discredit- ed the German military tradition so thor- oughly that those trying to build up a new army after the war had to go a long way back to find usable role models. The one they ended up evoking at the founding ceremony of the Bundeswehr in 1955 was Scharnhorst, the Prussian commander who combined military skills in the war against Napoleon with solid liberal credentials.

Today his grave lies a few feet away from the former course of the Berlin Wall in a cemetery, known as the Invaliden- friedhof, once reserved solely for avatars of the German military tradition. Little of the graveyard is intact. Some tombstones were shattered during the war, others were ploughed under by the Cold War divisions that followed later on. (The bones of the Red Baron, Manfred Freiherr von Richthofen, are said to lie in anonymity beneath the no-man's-land where border guards once patrolled with their kalash- nikovs.) Scharnhorst himself, ringed by col- leagues who died at Warsaw or the Somme in wars he never saw, ended up a few metres far enough to the east for his tomb to remain intact, and the East Ger- man army, which staked its own claim to his legacy, brought its officers here to be sworn in. 'But they left the grave untend- ed,' says my guide — a Bundeswehr officer who brought me to the spot. 'There was a certain ambiguity in their attitude.' Hence- forth, he says, it is the Bundeswehr, the army of a Germany re-united, that will care for the grave; one cannot help but wonder whether the ambiguity of attitude persists nevertheless.