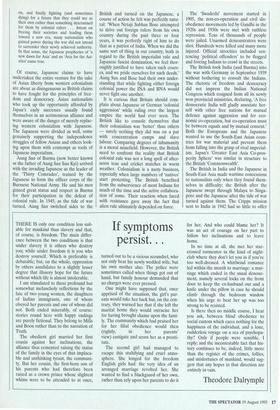 THERE IS only one condition less suit- able for mankind than slavery and that, of course, is freedom. The main differ- ence between the two conditions is that under slavery it is others who destroy you; while under freedom it is you who destroy yourself. Which is preferable is debatable; but, on the whole, oppression by others annihilates to a slightly lesser degree that illusory hope for the future without which life is almost intolerable.

I am stimulated to these profound but somewhat melancholy reflections by the fate of two young women, the daughters of Indian immigrants, one of whom obeyed her parents and one of whom did not. Both ended miserably, of course: stories round here with happy endings are purely fictional. They belong to Mills and Boon rather than to the narration of Truth.

The obedient girl married her first cousin against her inclinations, the alliance thus cemented raising the status of the family in the eyes of that implaca- ble and unthinking tyrant, the communi- ty. But her cousin, the first-born son of his parents who had therefore been raised as a crown prince whose slightest whims were to be attended to at once, turned out to be a vicious scoundrel, who not only beat his newly wedded wife, but his own mother also. The police were sometimes called when things got out of hand, but family honour demanded that no charges were ever pressed.

One might have supposed that, once apprised of the situation, the girl's par- ents would take her back but, on the con- trary, they warned her that if she left the marital home they would ostracise her for having brought shame upon the fami- ly. The community which had praised her for her filial obedience would then (rightly, in her parents' view) castigate and scorn her as a prosti- tute.

The second girl had managed to escape this stultifying and cruel atmo- sphere. She longed for the freedom English girls had: the very idea of an arranged marriage revolted her. She wanted to find a blackguard of her own, rather than rely upon her parents to do it for her. And who could blame her? It was an act of courage on her part to follow her inclinations and to leave home.

In no time at all, she met her star- crossed tormentor in the kind of night- club where they don't let you in if you're too well-dressed. A whirlwind romance led within the month to marriage: a mar- riage which ended in the usual denoue- ment, namely several locks on the front door to keep the ex-husband out and a knife under the pillow in case he should climb through the bedroom window when his urge to beat her up was too strong to be resisted.

Is there then no middle course, I hear you ask, between blind obedience to social custom which cares nothing for the happiness of the individual, and a lone, rudderless voyage on a sea of psychopa- thy? Only if people were sensible, I reply; and the incontestable fact that his- tory continues to be, indeed, little more than the register of the crimes, follies, and misfortunes of mankind, would sug- gest that any hopes in that direction are entirely in vain.