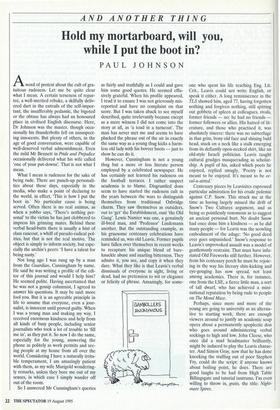 Hold my mortarboard, will you, while I put the boot in?

Aword of protest about the cult of gra- tuitous rudeness. Let me be quite clear what I mean. A certain terseness of repar- tee, a well-merited rebuke, a skilfully deliv- ered dart in the entrails of the self-impor- tant, the insufferably pedantic, the bigoted or the obtuse has always had an honoured place in civilised English discourse. Here, Dr Johnson was the master, though occa- sionally his thunderbolts fell on unsuspect- ing innocents. But plenty of others, in the age of good conversation, were capable of well-deserved verbal admonishment. Even the mild Mr Bennett in Pride and Prejudice occasionally delivered what his wife called 'one of your put-downs'. That is not what I mean.

What I mean is rudeness for the sake of being rude. There are punch-up personali- ties about these days, especially in the media, who make a point of declaring to the world, in effect, 'This is how I put the boot in.' No particular cause is being served. Often there is no real animus, as when a yobbo says, 'There's nothing per- sonal' to the victim he has just clobbered to impress his grinning mates. Behind these verbal head-butts there is usually a hint of class rancour, a whiff of pseudo-radical pol- itics, but that is not the real motive. The object is simply to inform society, but espe- cially the urchin's peers: 'I have a talent for being nasty.'

Not long ago I was rung up by a man from the Guardian, Cunningham by name. He said he was writing a profile of the edi- tor of this journal and would I help him? He seemed polite. Having ascertained that he was not a gossip columnist, I agreed to answer his questions. It may be said: more fool you. But it is an agreeable principle in life to assume that everyone, even a jour- nalist, is innocent until proved guilty. When I was a young man and making my way, I received enormous kindness and help from all kinds of busy people, including senior journalists who took a lot of trouble to 'fill me in', as they put it. So now I do the same, especially for the young, answering the phone as politely as work permits and see- ing people at my house from all over the world. Considering I have a naturally irrita- ble temperament, I am amazingly patient with them, as my wife Marigold wondering- ly remarks, unless they bore me out of my senses, in which case I simply wander off out of the room.

So I answered Mr Cunningham's queries as fairly and truthfully as I could and gave him some good quotes. He seemed effu- sively grateful. When his profile appeared, I read it to ensure I was not grievously mis- reported and have no complaint on that score. But I was taken aback to see myself described, quite irrelevantly because except as a mere witness I did not come into the story at all, as 'a toad in a turncoat'. The man has never met me and seems to have plucked the phrase out of the air in exactly the same way as a young thug kicks a harm- less old lady with his bower boots — just to show he can do it.

However, Cunningham is not a young thug but a more or less literate person employed by a celebrated newspaper. He has certainly not learned his rudeness on the football terraces. I rather suspect academia is to blame. Disgruntled dons seem to have started the rudeness cult in the years between the wars to distinguish themselves from traditional Oxbridge charm. They saw themselves as outsiders, out to 'get' the Establishment, oust 'the Old Gang'. Lewis Namier was one, a genuinely ill-bred man, and 'Professor' Lindemann another. But the outstanding example, as his gruesome centenary celebrations have reminded us, was old Leavis. Former pupils have fallen over themselves in recent weeks to recapture his unique blend of bare- knuckle abuse and snarling bitterness. They admire it, you see, and copy it when they dare. What they like is that Leavis's verbal dismissals of everyone in sight, living or dead, had no pretension to wit or elegance or felicity of phrase. Amazingly, for some- one who spent his life teaching Eng. Lit. Crit., Leavis could not write English, or speak it either. A long reminiscence in the TLS showed him, aged 77, having forgotten nothing and forgiven nothing, still spitting out gobbets of spleen at colleagues, rivals, former friends — no: he had no friends — former followers or allies. His hatred of lit- erature, and those who practised it, was absolutely sincere: there was no subterfuge in that grim, bony old face and shining bald head, stuck on a neck like a stalk emerging from its defiantly open-necked shirt, like an old-style Israeli politician. Leavis taught cultural grudges masquerading as scholar- ship. A pupil of his, asked which poets he enjoyed, replied smugly, 'Poetry is not meant to be enjoyed. It's meant to be ee- val-u-airted.'

Centenary pieces by Leavisites expressed particular admiration for his crude polemic against C.P. Snow. This struck me at the time as having largely missed the drift of Snow's Two Cultures argument, and as being so pointlessly venomous as to suggest an ancient personal hurt. No doubt Snow had once done him a kindness — as he did many people — for Leavis was the scowling embodiment of the adage: 'No good deed ever goes unpunished.' Snow's response to Leavis's unprovoked assault was a model of gentlemanly restraint. That must have infu- riated Old Fireworks still further. However. from his centenary perch he must be rejoic- ing in the way his literary shin-kicking and eye-gouging has now spread, not least among academics. There is, for instance, one from the LSE, a fierce little man, a sort of tall dwarf, who has achieved a mini- national reputation by being rude to people on The Moral Maze.

Perhaps, since more and more of the young are going to university as an alterna- tive to starting work, there are enough viewers around to justify an academic soap opera about a permanently apoplectic don who goes around administering verbal sockings to high and low. John Cleese, who once did a mad headmaster brilliantly, might be induced to play the Leavis charac- ter. And Simon Gray, now that he has done knocking the stuffing out of poor Stephen Fry, could do the script: if anyone knows about boiling point, he does. There are good laughs to be had from High Table Billingsgate and tutorial tantrums. I'm even willing to throw in, gratis, the title: Night- mare Spires.