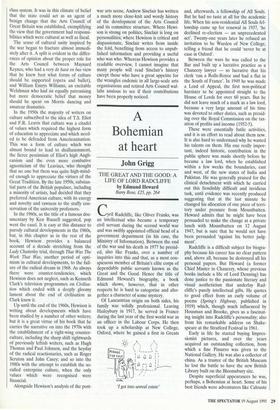 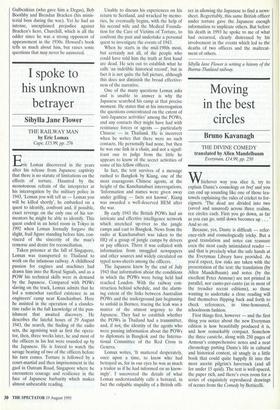 A Bohemian at heart

THE GREAT AND THE GOOD: A LIFE OF LORD RADCLIFFE by Edmund Heward Barry Rose, £25, pp. 264 Cil Radcliffe, like Oliver Franks, was an intellectual who became a temporary civil servant during the second world war and was swiftly appointed official head of a government department (in his case, the Ministry of Information). Between the end of the war and his death in 1977 he presid- ed, also like Franks, over a number of inquiries into this and that, as a most con- spicuous member of Britain's elite corps of dependable public servants known as the Great and the Good. Hence the title of Edmund Heward's biography, a book which shows, however, that in other respects he is hard to categorise and alto- gether a character of some mystery.

Of Lancastrian origin on both sides, his family was solidly professional. Leaving Haileybury in 1917, he served in France during the last year of the first world war as an officer in the Labour Corps. He then took up a scholarship at New College, Oxford, where he gained a first in Greats 7 got into unreal estate' and, afterwards, a fellowship of All Souls. But he had no taste at all for the academic life. When his non-residential All Souls fel- lowship came up for renewal in 1937, 'he declined re-election — an unprecedented act'. Twenty-one years later he refused an invitation to be Warden of New College, telling a friend that he could 'never be at ease in Oxford'.

Between the wars he was called to the Bar and built up a lucrative practice as a Chancery lawyer — so lucrative that his clerk 'ran a Rolls-Royce and had a flat in the South of France'. In 1949 he was made a Lord of Appeal, the first non-political barrister to be appointed straight to the House of Lords for over 60 years. But he did not leave much of a mark as a law lord, because a very large amount of his time was devoted to other duties, such as presid- ing over the Royal Commission on the tax- ation of profits and income (1952-5).

These were essentially futile activities, and it is an effort to read about them now. It is also hard to understand why he wasted his talents on them. His one really impor- tant, indeed historic, contribution in the public sphere was made shortly before he became a law lord, when he established within a few weeks the boundaries, east and west, of the new states of India and Pakistan. He was generally praised for the clinical detachment with which he carried out this fiendishly difficult and invidious task until evidence was recently produced suggesting that at the last minute he changed his allocation of one piece of terri- tory under pressure from Mountbatten. Heward admits that he might have been persuaded to make the change at a private lunch with Mountbatten on 12 August 1947, but is sure that he would not have been persuaded 'against his better judg- ment'.

Radcliffe is a difficult subject for biogra- phy because his career has no clear pattern and, above all, because he destroyed all his personal papers. But Heward (a former Chief Master in Chancery, whose previous books include a life of Lord Denning) has done justice to the passionate literary and visual aestheticism that underlay Rad- cliffe's purely intellectual gifts. He quotes to good effect from an early volume of poems (Spring's Highway, published in 1919) which, though much influenced by Housman and Brooke, gives us a fascinat- ing insight into Radcliffe's personality; also from his remarkable address on Shake- speare at the Stratford Festival in 1961.

Early in life he started buying Impres- sionist pictures, and over the years acquired an outstanding collection, from which a fine Pissarro was given to the National Gallery. He was also a collector of china. As a trustee of the British Museum he lost the battle to have the new British Library built on the Bloomsbury site.

Despite superficial appearances he was, perhaps, a Bohemian at heart. Some of his best friends were adventurers like Calouste Gulbenkian (who gave him a Degas), Bob Boothby and Brendan Bracken (his minis- terial boss during the war). Yet he had an intense, unexplained prejudice against Bracken's hero, Churchill, which is all the odder since he was a strong opponent of appeasement in the 1930s. Heward's book tells us much about him, but raises some questions that may never be answered.