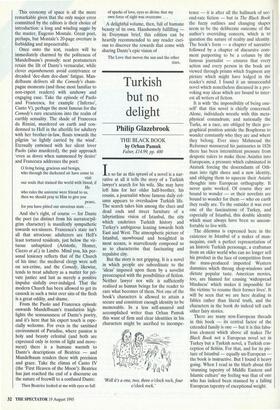 Turkish but no delight

In so far as this sprawl of a novel is a nar- rative at all it tells the story of a Turkish lawyer's search for his wife. She may have left him for her older half-brother, his cousin, a journalist whose famous daily col- umn appears to overshadow Turkish life. The search takes him among the clues and dead ends and street furniture of a labyrinthine vision of Istanbul, the city which enshrines Turkish history and Turkey's ambiguous leaning towards both East and West. The atmospheric picture of Istanbul, snowbound and benighted in most scenes, is marvellously composed so as to characterise that fascinating and repulsive city.

But the story is not gripping. It is a novel in which people are subordinate to the 'ideas' imposed upon them by a novelist preoccupied with the possibilities of fiction. Neither lawyer nor wife is sufficiently realised as human beings for the reader to care what becomes of them. Not one of the book's characters is allowed to attain a secure and consistent enough identity to be memorable. In a less self-assured and accomplished writer than Orhan Pamuk this want of firm and clear identities in his characters might be ascribed to incompe- 'Well it's a one, two, three o'clock rock, four o'clock rock' tence — it is after all the hallmark of sec- ond-rate fiction — but in The Black Book the fuzzy outlines and changing shapes seem to be the deliberate outcome of the author's overriding concern, which is to question the nature of reality and identity. The book's form — a chapter of narrative followed by a chapter of discursive com- ment purporting to be a column by the famous journalist — ensures that every action and every person in the book are viewed through prisms which fragment any picture which might have lodged in the reader's mind. I found it an unsuccessful novel which nonetheless discussed in a pro- voking way ideas which are bound to inter- est all writers of fiction.

It is with 'the impossibility of being one- self that this novel is chiefly concerned. Alone, individuals wrestle with this meta- physical conundrum; and nationally the Turks, as a race, are obliged by their geo- graphical position astride the Bosphorus to wonder constantly who they are and where they belong. Ever since Mahmoud the Reformer massacred his janissaries in 1826 there has been intermittent pressure from despotic rulers to make these Asiatics into Europeans, a pressure which culminated in Ataturk forcing the descendants of 0th- man into tight shoes and a new identity, and obliging them to squeeze their Asiatic thoughts into European orthography. It never quite worked. Of course they are bound to wonder — or their novelists are bound to wonder for them — who on earth they really are. To the outsider it was ever one of the fascinations of Turkey, and especially of Istanbul, this double identity which must always have been so uncom- fortable to live with.

The dilemma is expressed here in the existence in Istanbul of a maker of man- nequins, each a perfect representation of an historic Turkish personage, a craftsman from an older world who can no longer sell his product in the face of competition from the mass-produced imported Western dummies which throng shop-windows and dictate popular taste. American movies, too, are blamed for causing 'widespread blindness' which makes it impossible for the victims 'to resume their former lives'. It will be seen that we are here dealing in fables rather than literal truth, and the characters in the book do indeed tell each other fairy stories.

There are many non-European threads in this book — its central factor of the extended family is one — but it is this fabu- lous element which above all makes The Black Book not a European novel set in Turkey but a Turkish novel, a Turkish con- ception of fiction. For that, and for its pic- ture of Istanbul — equally un-European — the book is instructive. But I found it heavy going. When I read in the blurb about this 'stunning tapestry of Middle Eastern and Islamic culture' my feeling was that of one who has indeed been stunned by a falling European tapestry of exceptional weight.