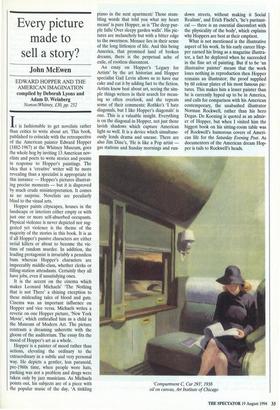 Every picture made to sell a story?

EDWARD HOPPER AND THE AMERICAN IMAGINATION compiled by Deborah Lyons and Adam D. Weinberg Norton/Whitney, £30, pp. 252 It is fashionable to get novelists rather than critics to write about art. This book, published to coincide with the retrospective of the American painter Edward Hopper (1882-1967) at the Whitney Museum, goes the whole hog by inviting 13 American nov- elists and poets to write stories and poems in response to Hopper's paintings. The idea that a `creative' writer will be more revealing than a specialist is appropriate in this instance — Hopper's pictures illustrat- ing precise moments — but it is disproved by much crude misinterpretation. It comes as no surprise. Novelists are peculiarly blind to the visual arts.

Hopper paints cityscapes, houses in the landscape or interiors either empty or with just one or more self-absorbed occupants. Physical violence is never depicted nor sug- gested yet violence is the theme of the majority of the stories in this book. It is as if all Hopper's passive characters are either serial killers or about to become the vic- tims of random murder. In addition, the leading protagonist is invariably a penniless bum whereas Hopper's characters are impeccably middle-class, whether clerks or filling-station attendants. Certainly they all have jobs, even if unsatisfying ones.

It is the accent on the cinema which makes Leonard Michaels' The Nothing that is not There' a shining exception to these misleading tales of blood and guts. Cinema was an important influence on Hopper and vice versa. Michaels writes a reverie on one Hopper picture, `New York Movie', which enthralled him as a child in the Museum of Modern Art. The picture contrasts a dreaming usherette with the gloom of the auditorium. The essay fits the mood of Hopper's art as a whole.

Hopper is a painter of mood rather than actions, elevating the ordinary to the extraordinary in a subtle and very personal way. He depicts a gentler, less paranoid, pre-1960s time, when people wore hats, parking was not a problem and drugs were taken only by jazz musicians. As Michaels points out, his subjects are of a piece with the popular music of the day, `A tinkling piano in the next apartment/ Those stum- bling words that told you what my heart meant' is pure Hopper, as is `The deep pur- ple falls/ Over sleepy garden walls'. His pic- tures are melancholy but with a bitter edge to the sweetness. Menace lies in their sense of the long littleness of life. And this being America, that promised land of broken dreams, there is the perpetual ache of exile, of rootless discontent.

An essay on Hopper's `Legacy for Artists' by the art historian and Hopper specialist Gail Levin allows us to have our cake and eat it by adding fact to the fiction. Artists know best about art, seeing the sim- ple things writers in their search for mean- ing so often overlook, and she repeats some of their comments; RothIco's `I hate diagonals, but I like Hopper's diagonals' is one. This is a valuable insight. Everything is on the diagonal in Hopper, not just those lavish shadows which capture American light so well. It is a device which simultane- ously lends drama and unease. There are also Jim Dine's, 'He is like a Pop artist — gas stations and Sunday mornings and run- down streets, without making it Social Realism', and Erich Fischl's, 'he's puritani- cal — there is an essential discomfort with the physicality of the body', which explains why Hoppers are best at their emptiest.

What is not mentioned is the illustrative aspect of his work. In his early career Hop- per earned his living as a magazine illustra- tor, a fact he deplored when he succeeded in the fine art of painting. But if to be `an illustrative painter' means that the work loses nothing in reproduction then Hopper remains an illustrator; the proof supplied by 60 colour plates of his most famous pic- tures. This makes him a lesser painter than he is currently hyped up to be in America, and calls for comparison with his American contemporary, the unabashed illustrator Norman Rockwell, rather than his hero Degas. De Kooning is quoted as an admir- er of Hopper, but when I visited him the biggest book on his sitting-room table was of Rockwell's humorous covers of Ameri- can life for the Saturday Evening Post. As documentors of the American dream Hop- per is tails to Rockwell's heads.