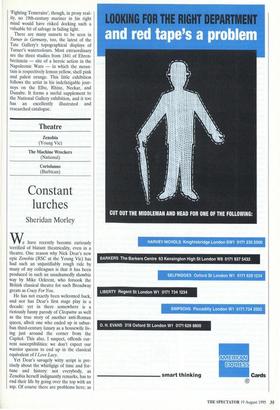 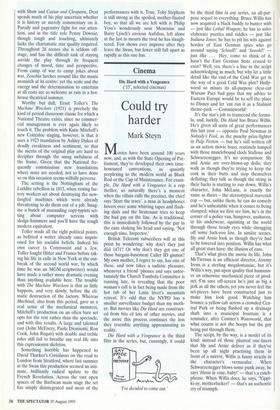 We have recently become curiously terrified of blatant theatricality, even in a theatre. One reason why Nick Dear's new epic Zenobia (RSC at the Young Vic) has had such an unjustifiably rough ride by many of my colleagues is that it has been produced in such an unashamedly showbiz way by Mike Ockrent, who forsook the British classical theatre for such Broadway greats as Crazy For You.

He has not exactly been welcomed back, and nor has Dear's first stage play in a decade: yet in there somewhere is a riotously funny parody of Cleopatra as well as the true story of another anti-Roman queen, albeit one who ended up in subur- ban third-century luxury as a housewife liv- ing just around the corner from the Capitol. This also, I suspect, offends cur- rent susceptibilities: we don't expect our warrior queens to end up in the classical equivalent of I Love Lucy.

Yet Dear's savagely witty script is pre- cisely about the whirligigs of time and for- tune and history: not everybody, as Zenobia herself indignantly remarks, has to end their life by going over the top with an asp. Of course there are problems here; as with Shaw and Caesar and Cleopatra, Dear spends much of his play uncertain whether it is history or merely commentary on it. Parody and pageantry fight for our atten- tion, and in the title role Penny Downie, though tough and touching, ultimately lacks the charismatic star quality required. Throughout 28 scenes she is seldom off- stage, and has the difficult task of staying astride the play through its frequent changes of mood, time and perspective. From camp of war to camp jokes about war, Zenobia lurches around like the manic monarch at its centre: yet the scale and the energy and the determination to entertain at all costs are as welcome as rain in a hot- house theatrical summer.

Worthy but dull, Ernst Toiler's The Machine Wreckers (1921) is precisely the kind of period classroom classic for which a National Theatre exists, since no commer- cial management is ever again likely to touch it. The problem with Katie Mitchell's new Cottesloe staging, however, is that it uses a 1923 translation by Ashley Dukes of deadly creakiness and sentiment, so that the merits of the original play are hard to decipher through the smug awfulness of the frame. Given that the National fre- quently commissions new translations where none are needed, not to have done so on this occasion seems wilfully perverse.

The setting is the Nottingham of the Luddite rebellion in 1815, when rioting fac- tory workers set about destroying the new- fangled machines which were already threatening to do them out of a job. Imag- ine a bunch of marauding copy-typists set- ting about computer screens with sledge-hammers and you'll have the rough modern equivalent.

Toiler made all the right political points, as befitted a writer already once impris- oned for his socialist beliefs. Indeed his own career (a Communist and a Jew, Toiler fought Hitler and Franco before tak- ing his life in exile in New York at the out- break of the second world war, by which time he was an MGM scriptwriter) would have made a rather more dramatic evening than anything available here. The trouble with The Machine Wreckers is that so little happens, and very slowly, before the cli- matic destruction of the factory. Whereas Machinal, also from this period, gave us a real sense of the mechanical monsters, Mitchell's production on an often bare set opts for the text rather than the spectacle, and with dire results. A large and talented cast (John McEnery, Paola Dionisotti, Ron Cook, John Rogan) with double and treble roles still fail to breathe any real life into this expressionist skeleton.

Something horrible has happened to David Thacker's Coriolanus on the road to London from Stratford, where last summer at the Swan this production seemed an inti- mate, brilliantly radical update to the French Revolution. Across the vast open spaces of the Barbican main stage the set has simply disintegrated and most of the performances with it. True, Toby Stephens is still strong as the spoiled, mother-fixated boy, so that all we are left with is Philip Voss's wondrously sour Menenius and Barry Lynch's envious Aufidius, left alone at the last to mourn the rival he has slaugh- tered. Few shows ever improve after they leave the Swan, but fewer still fall apart as rapidly as this one has.