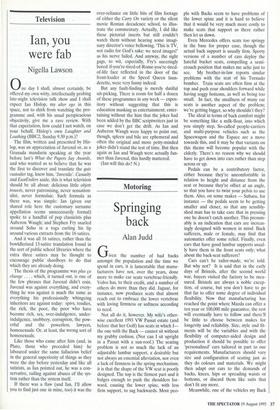 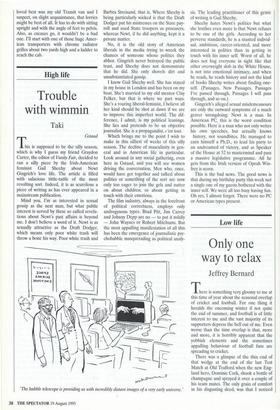 Given the number of bad backs amongst the population and the time we spend in cars, it is lamentable that manu- facturers have not, over the years, done more to make car seats vertebrae-friendly. Volvo has, to their credit, and a number of others do more than they did. Jaguar, for instance, now produces seats that almost reach out to embrace the lower vertebrae with loving firmness or softness according to need.

Not all do it, however. My wife's other- wise excellent 1993 VW Passat estate (and before that her Golf) has seats in which I— the one with the Back — cannot sit without my grubby cushion. (Nor can I sit upright in a Passat with a sun-roof.) The seating problem is not so much the lack of an adjustable lumbar support, a desirable but not always an essential alleviation, nor even a lack of firmness in the spring mechanism; it is that the shape of the VW seat is poorly designed. The top is the firmest part and it bulges enough to push the shoulders for- ward, causing the lower spine, with less firm support, to sag backwards. Most peo- ple with Backs seem to have problems of the lower spine and it is hard to believe that it would be very much more costly to make seats that support us there rather then let us down.

Even Mercedes offers seats too springy in the base for proper ease, though the actual back support is usually firm. Sporty versions of a number of cars deploy the hateful bucket seats, compelling a semi- crouch position that makes me ache just to see. My brother-in-law reports similar problems with the seat of his Tornado bomber. Train seats are often firm at the top and push your shoulders forward while having soggy bottoms, as well as being too small. In fact, the smallness of many car seats is another aspect of the problem; we're getting bigger, so why shouldn't they? The ideal in terms of back comfort might be something like a milk-float, into which you simply step. So-called people-carriers and multi-purpose vehicles such as the Spacewagon and the Espace are a move towards this, and it may be that variants on this theme will become popular with the elderly. There's no reason why we should have to get down into cars rather than step across or up.

Pedals can be a contributory factor, either because they're uncomfortable in relation to height and distance from the seat or because they're offset at an angle, so that you have to twist your pelvis to use them. Also, on some makes — Subaru, for instance — the pedals seem to be getting smaller and closer, so that any sensibly- shod man has to take care that in pressing one he doesn't catch another. This presum- ably is an indication that cars are increas- ingly designed with women in mind. Back sufferers, male or female, may find that automatics offer some relief. Finally, even cars that have good lumbar supports usual- ly have them in the front seats only; what about the back-seat sufferers?

Cars can't be tailor-made, we're told. But why not? It is said that in the early days of Bristols, after the second world war, buyers visited the factory to be mea- sured. Bristols are always a noble excep- tion, of course, but you don't have to go that far to offer some degree of individual flexibility. Now that manufacturing has reached the point where Mazda can offer a ten year or 100,000 mile guarantee, the rest will eventually have to follow and there'll be little to choose between makes for longevity and reliability. Size, style and fit- ments will be the variables and with the flexibility of computer-aided design and production it should be possible to offer 'personalised' cars tailored in part to our requirements. Manufacturers should vary size and configuration of seating just as they do colours and materials. We might then adapt our cars to the demands of backs, knees, hips or spreading waists or bottoms, or discard them like suits that don't fit any more.

Meanwhile, one of the vehicles my Back loved best was my old Transit van and I suspect, on slight acquaintance, that lorries might be best of all. It has to do with sitting upright and with the angle of feet to pelvis. Also, as excuses go, it wouldn't be a bad one. I'll start with one of those huge Amer- ican transporters with chrome radiator grilles about two yards high and a ladder to reach the cab.