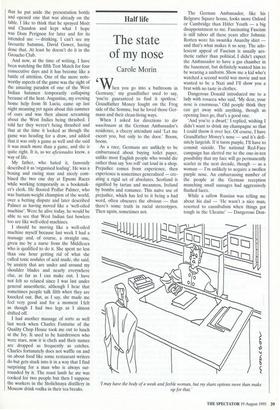 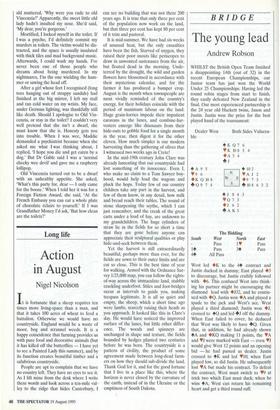 The state of my nose

hen you go into a bathroom in Germany,' my grandfather used to say, 'you're guaranteed to find it spotless.' Grandfather Money fought on the Frog side of the Somme, but he loved those Ger- mans and their clean-living ways.

When I asked for directions to der waschraum at the German Ambassador's residence, a cheery attendant said 'Let me escort you, but only to the door.' Boom, boom.

As a race, Germans are unlikely to be embarrassed about buying toilet paper, unlike most English people who would die rather than say goo roll' out loud in a shop. Prejudice comes from experience, then experience is sometimes generalised — cre- ating a rigid set of absolutes. Scotland is signified by tartan and meanness, Ireland by bombs and romance. This naive use of prejudice, which has led to it being a bad word, often obscures the obvious — that there's some truth in racial stereotypes. Then again, sometimes not. The German Ambassador, like his Belgrave Square house, looks more Oxford or Cambridge than Hitler Youth — a big disappointment to me. Fascinating Fascism is still taboo all these years after Johnnie Rotten wore his swastika Anarchy shirt — and that's what makes it so sexy. The ado- lescent appeal of Fascism is usually aes- thetic rather than political. I didn't expect the Ambassador to have a gas chamber in the basement, but definitely wanted him to be wearing a uniform. Show me a kid who's watched a second world war movie and not wanted to be a Nazi and I'll show you a brat with no taste in clothes.

Dangerous Donald introduced me to a lady with rosacea who said, 'My dear, your nose is enormous.' Old people think they can get away with anything, though as opening lines go, that's a good one.

'And you're a dwarf,' I replied, wishing I didn't want to drink my champagne so that I could throw it over her. Of course, I have Grandfather Money's nose — and it's defi- nitely largeish. If it turns purple, I'll have to commit suicide. The national Red-Face campaign has alerted me to the one-in-ten possibility that my face will go permanently scarlet in the next decade, though — as a woman — I'm unlikely to acquire a swollen purple nose. An embarrassing number of the people at the German reception munching small sausages had aggressively flushed faces.

While a sallow Russian was telling me about his dad — 'He wasn't a nice man, resorted to cannibalism when things got tough in the Ukraine' — Dangerous Don- 'I may have the body of a weak and feeble woman, but my share options more than make up for that.' aid muttered, `Why were you rude to old Vincenzia?' Apparently, the sweet little old lady hadn't insulted my nose. She'd said, `My dear, you're gorgeous.'

Mortified, I locked myself in the toilet. If I was a psycho, I'd definitely commit my murders in toilets. The victim would be dis- tracted, and the space is usually insulated with thick tiles and mad background music. Afterwards, I could wash my hands. I've never been one of those people who dreams about being murdered. In my nightmares, I'm the one wielding the ham- mer or sawing the head off.

After a girl whose feet I recognised (long toes hanging out of strappy sandals) had finished at the big mirror, I left my stall and ran cold water on my wrists. My face, under German lighting, was thankfully still like death. Should I apologise to Old Vin- cenzia, or stay in the toilet? I couldn't very well pretend that she isn't a dwarf, she must know that she is. Honesty gets you into trouble. When I was wee, Maddie demanded a psychiatrist because when she asked me what I was thinking about, I replied, 'I hope you die and get eaten by a dog.' But Dr Gable said I was a 'normal cheeky wee devil' and gave me a raspberry lollipop.

Old Vincenzia turned out to be a dwarf with an unhealthy appetite. She asked, `What's this party for, dear — I only came for the booze.' When I told her it was for a Foreign Fiction Award, she said, `At the French Embassy you can eat a whole plate of chocolate éclairs to yourself.' If I was Grandfather Money I'd ask, 'But how clean are the toilets?'