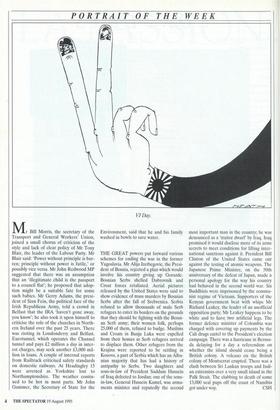 Mr Bill Morris, the secretary of the Transport and General Workers' Union, joined a small chorus of criticism of the style and lack of clear policy of Mr Tony Blair, the leader of the Labour Party. Mr Blair said: 'Power without principle is bar- ren; principle without power is futile,' or possibly vice versa. Mr John Redwood MP suggested that there was an assumption that an 'illegitimate child is the passport to a council flat'; he proposed that adop- tion might be a suitable fate for some such babies. Mr Gerry Adams, the presi- dent of Sinn Fein, the political face of the Irish Republican Army, told a crowd in Belfast that the IRA 'haven't gone away, you know'; he also took it upon himself to criticise the role of the churches in North- ern Ireland over the past 25 years. There was rioting in Londonderry and Belfast. Eurotunnel, which operates the Channel tunnel and pays 12 million a day in inter- est charges, may seek another £3,000 mil- lion in loans. A couple of internal reports from Rai1track criticised safety standards on domestic railways. At Headingley 15 were arrested as Yorkshire lost to Northamptonshire. The weather contin- ued to be hot in most parts. Mr John Gummer, the Secretary of State for the Environment, said that he and his family washed in bowls to save water.

THE GREAT powers put forward various schemes for ending the war in the former Yugoslavia. Mr Alija Izetbegovic, the Presi- dent of Bosnia, rejected a plan which would involve his country giving up Gorazde. Bosnian Serbs shelled Dubrovnik and Croat forces retaliated. Aerial pictures released by the United States were said to show evidence of mass murders by Bosnian Serbs after the fall of Srebrenica. Serbia refused to allow thousands of male Serb refugees to enter its borders on the grounds that they should be fighting with the Bosni- an Serb army; their women folk, perhaps 25,000 of them, refused to budge. Muslims and Croats in Banja Luka were expelled from their homes as Serb refugees arrived to displace them. Other refugees from the Krajina were reported to be settling in Kosovo, a part of Serbia which has an Alba- nian majority that has had a history of antipathy to Serbs. Two daughters and sons-in-law of President Saddam Hussein of Iraq defected to Jordan; one of the sons- in-law, General Hussein Kamel, was arma- ments minister and reputedly the second most important man in the country; he was denounced as a 'traitor dwarf' by Iraq. Iraq promised it would disclose more of its arms secrets to meet conditions for lifting inter- national sanctions against it. President Bill Clinton of the United States came out against the testing of atomic weapons. The Japanese Prime Minister, on the 50th anniversary of the defeat of Japan, made a personal apology for the way his country had behaved in the second world war. Six Buddhists were imprisoned by the commu- nist regime of Vietnam. Supporters of the Kenyan government beat with whips Mr Richard Leakey, the leader of an unofficial opposition party; Mr Leakey happens to be white and to have two artificial legs. The former defence minister of Colombia was charged with covering up payments by the Cali drugs cartel to the President's election campaign. There was a hurricane in Bermu- da delaying for a day a referendum on whether the island should cease being a British colony. A volcano on the British colony of Montserrat erupted. There was a clash between Sri Lankan troops and Indi- an extremists over a very small island in the Palk Strait. The clubbing to death of some 13,000 seal pups off the coast of Namibia