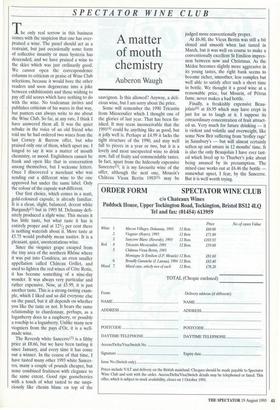 A matter of mouth chemistry

Auberon Waugh The only real sorrow in this business comes with the suspicion that one has over- praised a wine. The panel should act as a restraint, but just occasionally some form of collective insanity or mass hysteria has descended, and we have praised a wine to the skies which was just ordinarily good. We cannot open the correspondence columns to criticism or praise of Wine Club selections, because it would bore the other readers and soon degenerate into a joke between exhibitionists and those wishing to pay off old scores which have nothing to do with the wine. No tradesman invites and publishes criticism of his wares in that way, but punters can always write to me about the Wine Club. So far, at any rate, I think I have answered them all. It was the quiet rebuke in the voice of an old friend who told me he had ordered two wines from the last Corney & Barrow offer, but who praised only one of them, which upset me. I longed to say it was a matter of mouth chemistry, or mood. Englishmen cannot be frank and open like that in conversation among themselves, but I welcome letters. Once I discovered a merchant who was sending out a different wine to the one approved but under the same label. Only the colour of the capsule was different.

Our first choice, which comes in a matt, gold-coloured capsule, is already familiar. It is a clean, slight, balanced, decent white Burgundy(1) but in 1993 M. Delaunay defi- nitely produced a slight wine. This means it has little taste, but what taste it has is entirely proper and at 121/2 per cent there is nothing waterish about it. More taste at £5.75 would probably mean nastier. It is a pleasant, quiet, unostentatious wine.

Since the viognier grape escaped from the tiny area of the northern Rhenie where it was put into Condrieu, an even smaller appellation called Château Grillet, and used to lighten the red wines of COte Rotie, it has become something of a nine-day wonder. It was always very particular and rather expensive. Now, at £5.99, it is just another taste. This is a strong-tasting exam- ple, which I liked and so did everyone else on the panel, but it all depends on whether you like the taste or not. It bears the same relationship to chardonnay, perhaps, as a loganberry does to a raspberry, or possibly a rosehip to a loganberry. Unlike many new viogniers from the pays d'Oc, it is a well- made wine.

The Reverdy white Sancerre(3) is a filthy price at £8.66, but we have been tasting it since January, and every time it has come out a winner. In the course of that time, I have tasted many other 1993 white Sancer- res, many a couple of pounds cheaper, but none combined fruitiness with elegance to the same extent. Good ripe gooseberries with a touch of what tasted to me suspi- ciously like chenin blanc on top of the sauvignon. Is this allowed? Anyway, a deli- cious wine, but I am sorry about the price.

Some will remember the 1990 Tricastin from Micocoulier which I thought one of the glories of last year. That has been fin- ished. It may seem inconceivable that the 1991(a) could be anything like as good, but it jolly well is. Perhaps at £4.99 it lacks the tight structure of the 1990, and may well fall to pieces in a year or two, but it is a lovely and most unexpected wine to drink now, full of fruity and commendable tastes. In fact, apart from the hideously expensive Sancerre(3), it is my favourite wine of the offer, although the next one, Moueix's Château Vieux Benin 1993(), may be judged more conventionally proper.

At £6.80, the Vieux Bertin was still a bit closed and smooth when last tasted in March, but it was well on course to make a conventionally excellent St Emilion impres- sion between now and Christmas. As the Medoc becomes slightly more aggressive in its young tastes, the right bank seems to become richer, smoother, less complex but well able to satisfy after such a short time in bottle. We thought it a good wine at a reasonable price, but Moueix, of Petrus fame, never makes a bad bottle.

Finally, a freakishly expensive Beau- jolais(6) at £6.95 which may have crept in just for us to laugh at it. I suppose its extraordinary concentration of fruit attract- ed us. Very much for future drinking — it is violent and volatile and overweight, like some New Brit suffering from 'trolley rage' in Sainsbury's — but will almost certainly soften up and amaze in 12 months' time. It is also the only Beaujolais I have ever tast- ed which lived up to Thurber's joke about being amused by its presumption. The mixed case works out at £6.46 the bottle — somewhat upset, I fear, by the Sancerre. But it is well worth trying.

From: Delivery address (if different): NAME NAME ADDRESS ADDRESS POSTCODE POSTCODE DAYTIME TELEPHONE DAYTIME TELEPHONE Access/Delta/Visa/Switch No Signature Expiry date Issue No (Switch only) Prices include VAT and delivery on the British mainland. Cheques should be made payable to Spectator Wine Club and sent with the order. Access/Delta/Visa/Switch details may be telephoned or faxed. This offer, which is subject to stock availability, closes on 1 October 1995.