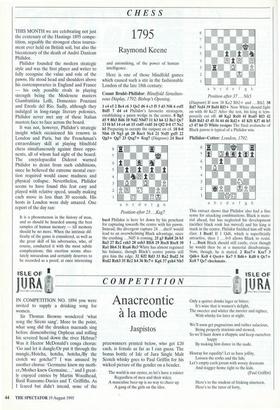 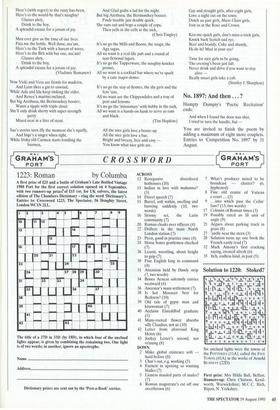 IN COMPETITION NO. 1894 you were invited to supply a drinking song for women.

Sir Thomas Browne wondered 'what song the Sirens sang'. More to the point, what song did the drunken maenads sing before dismembering Orpheus and rolling his severed head down the river Hebrus? Was it Hector McDonald's conga chorus: 'Go and let it dangle/Or put it through the mangle,/Hotcha, hotcha, hotchaRy the crotch we gotchal'? I was amused by another chorus: 'Germaine knew my moth- er,/Mother knew Germaine...' and I great- ly enjoyed entries by Martin Woodhead, Basil Ransome-Davies and T. Griffiths. As I feared but didn't intend, none of the prizewinners printed below, who get £20 each, is female as far as I can guess. The bonus bottle of Isle of Jura Single Malt Scotch whisky goes to Paul Griffin for his wicked picture of the gender on a bender.

The world is our oyster, so let's have a roister Regardless of men and their wiles; A masculine beer-up is no way to cheer up A gang of the girls on the tiles. Only a quitter drinks lager or bitter; It's wine that is women's delight, The sweeter and whiter the meeter and righter, With whisky for later at night.

We'll soon get pugnacious and rather salacious, Being properly stocious and stewed, So we'll hunt down a chappie and keep ourselves happy By making him dance in the nude.

Hooray for equality! Let us have jollity, Loosen the corks and the lids; Let's empty each jorum with woozy decorum And stagger home tight to the kids.

Men ever give us the time of our lives. Pass me the bottle. Well done, ma'am. Here's to the Turk with a harem of wives, Here's to the Brit with but one, ma'am!

Glasses ahoy, Drink to the boy, A splendid excuse for a jorum of joy.

(Vladimir Romanov) Now Vicki and Vera are fiends for madeira, And Lynn likes a gin to unwind, While Ada and Ida keep sinking the cider, And Renee's martini-inclined.

But big Arethusa, the Bermondsey boozer, Wants a tipple with triple clout: She'll only drink sherry with super-strength perry Mixed neat in a litre of stout.

Sue's stories turn iffy the moment she's squiffy, And Inge's a singer when tight, While frisky old Carmen starts fondling the barmen, And Glad grabs a lad for the night.

But big Arethusa, the Bermondsey boozer, Finds trouble just double quick: She runs out and bops a couple of cops, Then yells in the cells at the nick, (Chris Tingley) It's no go the Mills and Boons, the soaps, the Aga sagas, All we want is a real-life pub and a round of non-fictional lagers.

It's no go the Tupperware, the naughty-knicker promo, All we want is a cocktail bar where we're spoilt by a cute major-domo.

It's no go the stay-at-homes, the shy girls and the fern 'uns, All we want are the Chippendales and a tray of port and lemons.

It's no go the 'missionary' with hubby in the sack, All we want is a hands-on hunk to serve us rum and black.

Kiss-me-quick girls, don't-miss-a-trick girls, Knock back Scotch and rye, Beer and brandy, Coke and shandy, Hi-de-hi! Mud in your eye!

Time for nice girls to be going, The evening's been just fab.

Never drink and drive if you want to stay

And when I found the door was shut, I tried to turn the handle, but — You are invited to finish the poem by adding a maximum of eight more couplets. Entries to 'Competition No. 1897' by 31 August.