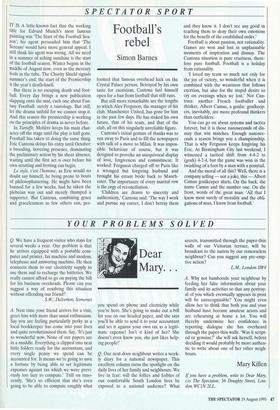 IT IS A little-known fact that the working title for Edvard Munch's most famous Painting was 'The Start of the Football Sea- son'; his agent persuaded him that 'The Scream' would have more general appeal. I still think his agent was wrong. All we need in a summer of aching sunshine is the start of the football season. Winter begins in the middle of August now, even as the mercury boils in the tube. The Charity Shield signals summer's end; the start of the Premiership is the year's death-knell.

But there is no escaping death and foot- ball. Every day brings a new publication slapping onto the mat, each one about Fan- tasy Football: surely a tautology. But still, let the drama unfold for we cannot stop it. And this season the premiership is working on the principles of drama as never before.

In Tartuffe, MoHere keeps his main char- acter off the stage until the play is half gone. Football has taken to doing the same thing. Eric Cantona delays his entry until October: a brooding, hovering presence, dominating the preliminary action by his sheer absence, waiting until the first act is over before his own strutting and fretting can begin.

Le style, c'est l'homme, as Eric would no doubt say himself, he being prone to bouts of philosophastering. He might have been banned for a few weeks, had he taken the plebeian way out and merely thumped a supporter. But Cantona, combining grace and gracelessness as few others can, per- formed that famous overhead kick on the Crystal Palace person. Betrayed by his own taste for exoticism, Cantona laid himself open for a ban from football that still runs.

But still more remarkable are the lengths to which Alex Ferguson, the manager of his club, Manchester United, has gone for him in the past few days. He has staked his own future, that of his team, and that of the club, all on this singularly unreliable figure.

'Children are drawn to sincerity and authenticity,' Cantona said. 'The way I work and pursue my career, I don't betray them and they know it. I don't see any good in teaching them to deny their own emotions for the benefit of the established order.'

Football is about passion, not rationality. Games are won and lost in unplannable moments of inspiration and dismay. The Cantona situation is pure craziness, there- fore pure football. Football is a holiday from rationality.

'I loved my team so much not only for the joy of victory, so wonderful when it is combined with the weariness that follows exertion, but also for the stupid desire to cry on evenings when we lost.' Not Can- tona: another French footballer and thinker, Albert Camus, a goalie: goalkeep- ers, inevitably, are more profound thinkers than outfielders.

You can go on about systems and tactics forever, but it is those nanoseconds of dis- may that win matches. Enough nanosec- onds a season brings you a championship. That is why Ferguson keeps forgiving his Eric. At Birmingham City last weekend, I witnessed a tactical shift from 4-4-2 to (gosh) 4-2-4, but the game was won in the twinkling of a foot by a man with a ponytail.

And the moral of all this? Well, there is a company selling — not a joke, this — Albert Camus goalkeeper shirts. On the back, the name Camus and the number one. On the front, words of the great man: 'All that I know most surely of morality and the obli- gations of man, I know from football.'