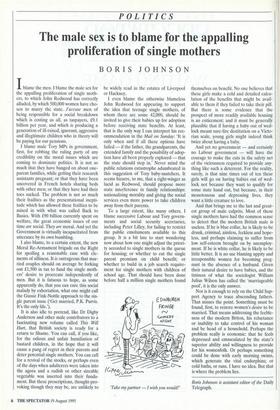 Iblame the men. I blame the male sex for the appalling proliferation of single moth- ers, to which John Redwood has correctly alluded, by which 500,000 women have cho- sen to marry the state. raccuse men of being responsible for a social breakdown which is costing us all, as taxpayers, £9.1 billion per year, and which is producing a generation of ill-raised, ignorant, aggressive and illegitimate children who in theory will be paying for our pensions.

I blame male Tory MPs in government, first, for robbing the ruling party of any credibility on the moral issues which are coming to dominate politics. It is not so much that they have banged on about one- parent families, while getting their research assistants pregnant; or that they have been uncovered in French hotels sharing beds with other men; or that they have had their toes sucked. The problem is not so much their frailties as the presentational inepti- tude which has allowed these frailties to be mixed in with what was called Back to Basics. With £90 billion currently spent on welfare, the great economic issues of our time are social. They are moral. And yet the Government is virtually incapacitated from utterance by its own bumbling.

I also blame, to a certain extent, the new Moral Re-Armament brigade on the Right for spoiling a reasonable case with ele- ments of silliness. It is outrageous that mar- ried couples should on average be forking out £1,500 in tax to fund the single moth- ers' desire to procreate independently of men. But it is fatuous to hope, as some apparently do, that you can cure this social malady by exhortation, what one might call the Gussie Fink-Nottle approach to the sin- gle parent issue Net married, P.K. Purvis. It's the only life.').

It is also idle to pretend, like Dr Digby Anderson and other male contributors to a fascinating new volume called This Will Hurt, that British society is ready for a return to Shame. You can call, if you like, for the odious and unfair humiliation of bastard children, in the hope that it will cause a pang of regret in their parents and deter potential single mothers. You can call for a revival of the stocks, or perhaps even of the days when adulterers were taken into the agora and a radish or other sizeable vegetable was inserted into their funda- ment. But these prescriptions, thought-pro- voking though they may be, are unlikely to be widely read in the estates of Liverpool or Hackney.

I even blame the otherwise blameless John Redwood for appearing to support the idea that teenage single mothers, of whom there are some 42,000, should be invited to give their babies up for adoption before receiving state benefits. At least, that is the only way I can interpret his rec- ommendation in the Mail on Sunday: 'It is only when and if all these options have failed — if the father, the grandparents, the extended family and the possibility of adop- tion have all been properly explored — that the state should step in.' Never mind the public relations catastrophe adumbrated in this suggestion of Tory baby-snatchers. It seems bizarre, to me, that a right-winger as lucid as Redwood, should propose more state interference in family relationships: nationalising morality and giving the social services even more power to take children away from their parents.

To a large extent, like many others, I blame successive Labour and Tory govern- ments and social security secretaries, including Peter Lilley, for failing to restrict the public emoluments available to this group. It is a bit late to start wondering now about how one might adjust the priori- ty accorded to single mothers in the queue for housing; or whether to cut the single parent premium on child benefit; or whether to build in a job search require- ment for single mothers with children of school age. That should have been done before half a million single mothers found 'Take my partner — I wish you would!' themselves on benefit. No one believes that these girls make a cold and detailed calcu- lation of the benefits that might be avail- able to them if they failed to take their pill. But there is some evidence that the prospect of more readily available housing is an enticement; and it must be generally plausible that if having a baby out of wed- lock meant sure-fire destitution on a Victo- rian scale, young girls might indeed think twice about having a baby.

And yet no government — and certainly no Labour government — will have the courage to make the cuts in the safety net of the viciousness required to provide any- thing like such a deterrent. For the reality, surely, is that nine times out of ten these girls will go on having babies out of wed- lock not because they want to qualify for some state hand out, but because, in their monotonous and depressing lives, they want a little creature to love.

And that brings me to the last and great- est group of male culprits. Most of these single mothers have had the common sense to detect that the modern British male is useless. If he is blue collar, he is likely to be drunk, criminal, aimless, feckless and hope- less, and perhaps claiming to suffer from low self-esteem brought on by unemploy- ment. If he is white collar, he is likely to be little better. It is no use blaming uppity and irresponsible women for becoming preg- nant in the absence of a husband. Given their natural desire to have babies, and the tininess of what the sociologist William Julius Wilson has called the 'marriageable pool', it is the only answer.

Nor is it enough to rely on the Child Sup- port Agency to trace absconding fathers. That misses the point. Something must be found, first, to restore women's desire to be married. That means addressing the feeble- ness of the modern Briton, his reluctance or inability to take control of his woman and be head of a household. Perhaps the problem really is economic: that he feels depressed and emasculated by the state's superior ability and willingness to provide for his womenfolk. Or perhaps something could be done with early morning swims, which generate the vital endorphins; or cold baths, or runs. I have no idea. But that is where the problem lies.