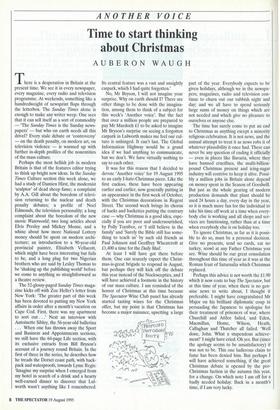 Time to start thinking about Christmas

There is a desperation in Britain at the present time. We see it in every newspaper, every magazine, every radio and television programme. At weekends, something like a hundredweight of newsprint flops through the letterbox. The Sunday Times alone is enough to make any writer weep. One sees that it can sell itself as a sort of commodity — 'The Sunday Times is the Sunday news- papers' — but who on earth needs all this drivel? Every stale debate or `controversy' — on the death penalty, on modern art, on television violence — is warmed up with further in-depth profiles of the nonentities of the mass culture.

Perhaps the most hellish job in modern Britain is that of the features editor hying to think up bright new ideas. In the Sunday Times Culture section this week alone, we had a study of Damien Hirst, the modernist 'sculptor' of dead sheep fame; a complaint by A.A. Gill about the boredom of televi- sion returning to the nuclear and death penalty debates; a profile of Noel Edmonds, the television personality; a long complaint about the boredom of the new movie Waterworld; two long articles about Elvis Presley and Mickey Mouse, and a whine about how more National Lottery money should be spent on modern archi- tecture; an introduction to a 90-year-old provincial painter, Elisabeth Vellacott, which might have been interesting but fails to be, and a long plug for two Nigerian brothers who are said by Lesley Thomas to be 'shaking up the publishing world' before we come to anything so straightforward as a theatre review.

The 52-glossy-paged Sunday Times maga- zine kicks off with Zoe Heller's letter from New York: `The greater part of this week has been devoted to putting my New York affairs in order after a month's vacation on Cape Cod. First, there was my apartment to sort out . . .' Next an interview with Antoinette Sibley, the 56-year-old ballerina . . . When one has thrown away the Sport and Business and Appointments sections, we still have the 64-page Life section, with its exclusive extracts from Bill Bryson's account of a journey round Britain. In the first of three in the series, he describes how he treads the Dorset coast path, with back- pack and waterproofs, towards Lyme Regis: 'Imagine my surprise when I emerged from my hotel in search of a drink and a hearty well-earned dinner to discover that Lul- worth wasn't anything like I remembered. Its central feature was a vast and unsightly carpark, which I had quite forgotten.'

No, Mr Bryson, I will not imagine your surprise. Why on earth should I? There are other things to be done with the imagina- tion, among them to think of a subject for this week's 'Another voice'. But the fact that over a million people are prepared to pay Mr Murdoch £1 to be asked to imagine Mr Bryson's surprise on seeing a forgotten carpark in Lulworth makes me feel our cul- ture is unhinged. It can't last. The Global Information Highway would be a grand idea if we had anything to communicate, but we don't. We have virtually nothing to say to each other.

It was for this reason that I decided to devote 'Another voice' for 19 August 1995 to an early I-hate-Christmas piece. Like the first cuckoo, these have been appearing earlier and earlier, now generally putting in an appearance in the first week of October, with the Christmas decorations in Regent Street. The second week brings its chorus of hacks and hackettes putting the contrary case — why Christmas is a good idea, espe- cially if you are poor and undernourished, by Polly Toynbee, or `I still believe in the family' and 'Surely the Bible still has some- thing to teach us' by such old friends as Paul Johnson and Geoffrey Wheatcroft at £1,400 a time for the Daily Mail.

At least I will have got there before them. One can scarcely expect the Christ- mas-is-great brigade to respond in August, but perhaps they will kick off the debate this year instead of the Noelosceptics, and I will have achieved a footnote in the history of our mass culture. I am reminded of the horror of Christmas at this time because The Spectator Wine Club panel has already started tasting wines for the Christmas offer, but my point is that Christmas has become a major nuisance, upsetting a large part of the year. Everybody expects to be given holidays, although we in the newspa- pers, magazines, radio and television con- tinue to churn out our rubbish night and day; and we all have to spend seriously large sums of money on things which are not needed and which give no pleasure to ourselves or anyone else.

The time has surely come to put an end to Christmas as anything except a minority religious celebration. It is not news, and the annual attempt to treat it as news robs it of whatever plausibility it once had. There can never be any question of ending it officially — even in places like Bavaria, where they have banned crucifixes, the multi-billion- pound Christmas present and icing-sugar industry will contrive to keep it alive. Possi- bly a million jobs in Britain alone depend on money spent in the Season of Goodwill.

But just as the whole gearing of modern production demands that plant should be used 24 hours a day, every day in the year, so it is much more fun for the individual to take his time off work at a time when every- body else is working and all shops and ser- vices are functioning, rather than at a time when everybody else is on holiday too.

To ignore Christmas, as far as it is possi- ble to do so, must be a personal decision.

Give no presents, send no cards, eat no turkey, scowl at any Father Christmas you see. Wine should be our great consolation throughout this time of year as it was at the Roman feast of Saturnalia which Christmas replaced.

Perhaps this advice is not worth the £1.90 which it now costs to buy The Spectator, but at this time of year, when there is no gen- uine news to write about, I thought it preferable. I might have congratulated Mr Major on his brilliant diplomatic coup in persuading the Japanese to apologise for their treatment of prisoners of war, where Churchill and Attlee failed, and Eden, Macmillan, Home, Wilson, Heath, Callaghan and Thatcher all failed. 'Well done, John. What a stupendous achieve- ment!' I might have cried. Oh yes. But (since the apology seems to be unsatisfactory) it was not to be. This one ludicrous claim to fame has been denied him. But perhaps I will have achieved something, if the great Christmas debate is opened by the pro- Christmas faction in the autumn this year, for a change. On which note I am off for a badly needed holiday. Back in a month's time, if I am very lucky.