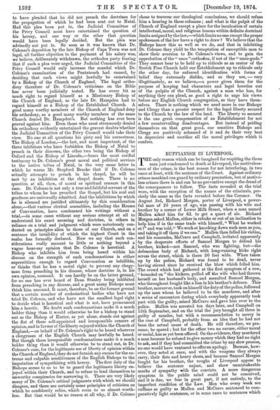 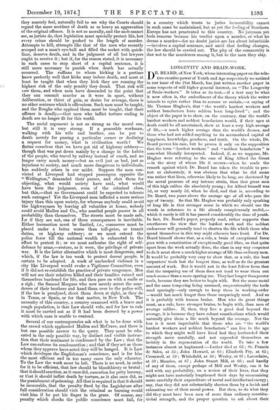 THE only reason which can be imagined for respiting the three men just condemned to death at Liverpool, the motiveless- ness of the crime, is the best reason for not interfering, in two

cases at least, with the sentence of the Court. Against ordinary crimes mankind can guard by ordinary precaution, but of motive- less crimes there is and can be no preventive except the dread of the consequences to follow. The facts revealed at the trial were, with the exception of the names of the criminals, pre- cisely the same as the facts revealed before the Coroner. On

August 3rd, Richard Morgan, porter of Liverpool, a power- ful man of 25 years of age, was passing with his wife and

brother by a corner of Lower Milk Street, when a man named Mullen asked him for 6d. to get a quart of ale. Richard Morgan asked Mullen, either in rebuke or out of an inclination to help him if in the same trade with himself, " What he worked

at ?" and was told," We work at knocking down such men as you, and taking it off them if we can." Mullen then felled his victim; and his comrades, McCrave and Campbell, irritated apparently by the desperate efforts of Samuel Morgan to defend his brother, kicked—not Samuel, who was fighting, but—the defenceless body of Richard, with long-running kicks right across the street, which is there 30 feet wide. When taken up by the police, Richard was found to be dead, never having stirred since he received the blow which felled him. The crowd which had gathered at the first symptom of a row, " hounded on " the kickers, pulled off the wife who had thrown herself on her husband's body, and assaulted Samuel Morgan, who throughout fought like a lion in his brother's defence.. This brother, moreover, took on himself the duty of the police, followed up the man whom he believed to be the murderer, and after a series of encounters during which everybody apparently took part with the guilty, seized McOrave and gave him over to the police. Mullen was arrested ten days later, and Campbell on 13th September, and on the trial the jury brought all three in guilty of murder, but with a recommendation to mercy in the case of Campbell, probably from an idea that he had not been the actual cause of death. He will therefore, we pre- sume, be spared ; but for the other two no excuse, either moral or social, has as yet been offered. On the evidence, they murdered a man because he refused to give money which they had no right to ask, and if they had committed the crime by any slow process, no one would have ventured to offer an apology. Because, how- ever, they acted at once, and with the weapons they always carry, their fists and heavy shoes, and because Samuel Morgan fought for his brother, the roughs of Liverpool appear to believe the sentence unjust, and show unmistakeable marks of sympathy with the convicts. A more dangerous symptom in the public mind could not be conceived, and it is due, we fear in great part, if not entirely, to the imperfect condition of the Law. Men who every week see ruffians as guilty as Mullen and McOrave sentenced to com- paratively light sentences, or in some cases to sentences which regard the mere accident of death as so heavy an aggravation of the original offence. It is not so morally, and the mob cannot see, as jurists do, that legislation must specially protect life, lest every crime should be pushed to the length of murder. Attempts to kill, attempts like that of the men who recently scooped out a man's eye-ball and filled the socket with quick- lime, deserve death, and in the judgment of all but lawyers ought to receive it ; but if, for the reason stated, it is necessary in such cases to stop short of a capital sentence, it is still more necessary to punish when death has actually occurred. The ruffians to whom kicking is a pastime know perfectly well that kicks may induce death, and must at least be taught that when they kick they are running the highest risk of the only penalty they dread. That risk will cow them, and when men have descended to the point that they can commit murder as it were in sport, without deliberation, or thirst of gain, or desire for revenge, there is no other sentence which is efficacious. Such men must be taught, and the Roughs who applaud them must be taught, that their offence is deadly,—that men who inflict torture ending in death are no longer fit for this world.

The social argument is not so strong as the moral one, but still it is very strong. If a peaceable workman, walking with his wife and brother, can be put to death merely for passing a particular corner or declining a request for money, what is civilisation worth ? We flatter ourselves that we have got rid of highway robbery— though that was put down mainly by a change in the habits of the people, who travel by railway instead of coach, and no longer carry much money—but an evil just as bad, just as injurious to society, and much more dangerous to individuals, has suddenly arisen in our midst. Suppose the men con- victed at Liverpool had stopped passengers opposite the " Wellington," demanded their purses, and shot them for objecting, what would society have said, what would have been the judgment, even of the criminal class, but this,—that no Government could be expected to tolerate such outrages? Yet the Liverpool men inflicted a more serious injury than this upon society, for whereas anybody could avoid the highwaymen by leaving all valuables at home, nobody could avoid Mullen and Co., who assailed people poorer in all probability than themselves. The streets must be made safe, far if they are not, one of three consequences is inevitable. Either locomotion must be limited, i.e., commerce must be placed under a fetter worse than toll-gates, or transit duties, or highway robbery; or we must extend the police force till the national wealth is exhausted in the effort to protect it ; or we must authorise the right of self- defence by arms,—restore, as it were, the privilege of private war. It is the latter alternative which is most dangerous, and which, if the law is too weak to protect decent people, is certain to be adopted. A week of unchecked violence in a city like Liverpool would evoke a Vigilance Committee, even if it did not re-establish the practice of private vengeance. Men will not see their relatives killed and their families ruined and themselves burdened for life, and then pass on with a smile or a sigh ; the Samuel Morgans who now merely arrest the mur- derers of their brothers and hand them over to the police will, if the law is paralysed, shoot them down at sight, as they do in Texas, or Spain, or for that matter, in New York. The necessity of this country, a country crammed with a brave and rough population, is that Law should rule, and for law to rule it must be carried out as if it had been decreed by a power with which man is unable to contend.

Several of our contemporaries ask what is to be done with the crowd which applauded Mullen and McCrave, and there is but one possible answer to the query. They must be edu- cated in the only possible way, by distinct and visible instruc- tion that their sentiment is condemned by the Law ; that the Law can enforce its condemnation ; and that if they act as those whom they approve have acted they will be hanged. It is Law which developes the Englishman's conscience, and is for him the most efficient and in too many cases the only educator. To the Law the work must be left. There is no need, in order for it to be efficient, that law should be bloodthirsty or brutal ; that it shouldsanction, as it once did, execution for petty larceny, or that it should inflict death by torture, as it also once did, as the punishment of poisoning. All that is required is that it should be inexorable, that the penalty fixed by the Legislature after full consideration should visit the criminal as burning would visit him if he put his finger in the grate. Of course, any penalty which shocks the public conscience must fail, for they scarcely feel, naturally fail to see why the Courts should in a country which trusts to juries inexorability cannot in such cases be maintained, but as yet the feeling of Southern Europe has not penetrated to this country. No juryman yet feels remorse because his verdict upon a murder, or what he deems a murder—for no doubt juries are lax about infanticide —involves a capital sentence, and until that feeling changes, the law should be carried out. The pity of the community is due not to the murderers among it, but to the men they slay.