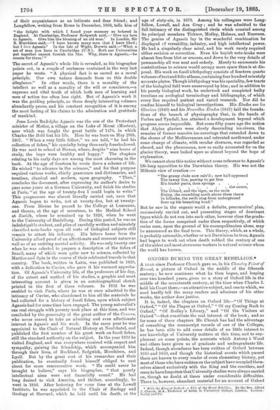 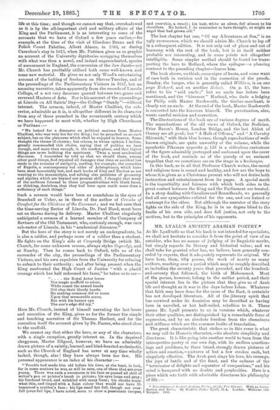 OXFORD DURING THE GREAT REBELLION.*

A YEAR since Professor Church gave us, in his Chantry Priest of Barnet, a picture of Oxford in the middle of the fifteenth century ; he now continues what he then began, and leaping over two hundred years, gives us a story of Oxford life in the middle of the seventeenth century, at the time when Charles I. held his Court there,—an attractive subject, and one to which, we need hardly tell the many readers and admirers of his other works, the author does justice.

It is, indeed, the chapters on Oxford life—" Of Things at Oxford," " Of the Plague at Oxford," " Of my Coming Back to Oxford," "Of Bodley's Library," and "Of the Visitors at Oxford "—that constitute the real interest of the book ; and as for some of these chapters Mr. Church has had the advantage of consulting the manuscript records of one of the Colleges, he has been able to add some details of no little interest to our knowledge of University matters at this time, and to sup- plement on some points, the accounts which Antony :1 Wood and others have given us of graduate and undergraduate life. Indeed, though abundance has been written of Oxford between 1640 and 1650, and though the historical events which passed there are known to every reader of even elementary history, yet most of those who have written on the subject have occupied them- selves almost exclusively with the King and the courtiers, and seem to have forgotten thatUniversity studies were always carried on, though no doubt at times under considerable difficulties. There is, however, abundant material for an account of Oxford • With the Ring at Oxford: a Tale of the Great Rebellion. By the Rev. Alfred J. Church, ALA , Professor of Latin in University College, London. London : Seeley and Co.

life at this time; and though we cannot say that, overshadowed as it is by the all-important civil and military affairs of the King and the Parliament, it is as interesting as some of the

-accounts that we have of Oxford a few years earlier,—for

example, at the time of the visit of Giordano Bruno and the Polish Count Palatine, Albert Alasco, in 1583, or during Casanbon's stay in 1613, when Mr. Pattison gives us so graphic an account of the University dignitaries occupying themselves with what was then a novel, and indeed unprecedented, species of amusement in England, the conversion of the Jew Jacob—yet Mr. Church has profitably utilised both some well-known and some new material. He gives us not only Wood's entertaining account of the baiting of freshmen on Shrove Tuesday, and of the proceedings of the Parliamentary Visitors in 1647, but an amusing narrative, taken apparently from the records of Lincoln College, of a not very decorous quarrel between two grave and reverend Masters of Arts. Nor is his account of the proceedings at Lincoln on All Saints' Day—the College "Gaudy "—without interest. The sermon, indeed, of Master Chalfont, the sub- rector, admirable as it is, is altogether different in its character from any of those preached in the seventeenth century which we have happened to meet with, whether by High Churchmen or Puritans :— " We looked for a discourse on political matters from Master Chalfont, who was very hot for the King ; but he preached on no such subject, but on the pleasures which shall be enjoyed in heaven. Some thought the theme ill-chosen ; but others, to whose opinion I incline, greatly commended this choice, saying that of politics we hear enough, and more than enough, in the market-place, and that higher things are more befitting the sanctuary. 'Twas a most academical discourse. I remember he told ns that we should there, among other good things, find repaired all damages that time or accident has made in the remains of antiquity, reading, for example, the comedies of Enpolis, a contemporary but elder of Aristophanes, which have been most lamentably lost, and such books of Livy and Tacitus as are wanting to the manuscripts, and solving also problems of geometry and algebra which are beyond our present skill. I thought that many of the auditors listened to these prognostications with blank faces, as thinking, doubtless, that they had here upon earth more than a sufficiency of such things."

Such a sermon would have been as scandalous in the eyes of Bramhall or Usher, as in those of the author of Crumbs of Comfort for the Chickens of the Covenant ; and we feel sure that the time-serving Rector of Lincoln, Dr. Paul Hood, must have sat on thorns during its delivery. Master Chalfont singularly anticipated a sermon of a learned member of the Company of Revisers of the Old Testament, who, curiously enough, was once sub-rector of Lincoln, in his "academical discourse."

But the hero of the story is not merely an undergraduate, he is also a soldier, and perhaps more of a soldier than a student.

He fights on the King's side at Cropredy Bridge (which Mr. Church, for some unknown reason, always styles Copredy), and at Naseby. Then he comes back to Oxford, tells us of the surrender of the city, the proceedings of the Parliamentary Visitors, and his own expulsion from the University for refusing to submit to their authority ; and after being present when the King confronted the High Court of Justice " with a placid courage which has half redeemed his fame," he takes us to see- " . . . . the Royal Actor borne The tragic scaffold to adorn, While round the armed bands Did clap their bloody hands. He nothing common did or mean Upon that memorable scene, But with his keener eye The axe's edge did try."

Here Mr. Church, instead of himself narrating the last hours and execution of the King, gives us for the former the simple and touching narrative of Sir Thomas Herbert, and for the execution itself the account given by Dr. Farrer, who stood close to the scaffold.

We cannot say that either the hero, or any of the characters, with a single exception, greatly interest ne. In the deprived clergyman, Master Ellgood, however, we have an admirably drawn picture of a saintly, learned, and kind-hearted ecclesiastic, such as the Church of England has never at any time wholly lacked, though, alas ! they have always been too few. His personal appearance is an index of his character :— " Trouble had made him old before his time, at the least, in look, for in some matters he was, as will be seen, one of them that are ever young. There was such a sweetness in his face as passed all skill of writer's pen or painter's brush to picture; his eyes large and grey ; his forehead broad, and wrinkled with many lines; his cheeks some- what thin, and tinged with a faint colour that would not have ill- beaeemed a maiden's face ; his lips small but full, though not over- fall (over-full lips, I have noted, seem to show a passionate temper,

and over-thin, a cruel) ; his hair, white as silver, fell almost to his shoulders. He looked, I do remember to have thought, as might an

angel that had grown old."

The last chapter but one, "Of my Adventures at Sea," is an ugly excrescence, which we should advise Mr. Church to lop off in a subsequent edition. It is not only out of place and out of

harmony with the rest of the book, but is in itself neither probable nor interesting, and in some points not altogether intelligible. Some simpler method should be found for trans- porting the hero to Holland, where the epilogue—a pleasing contrast to the preceding chapter—leaves him.

The book shows, we think, some signs of haste, and some want of care both in revision and in the correction of the proofs.

Beasley, the bargee, who is generally called William, is on one page Richard, and on another Robert. On p. 13, the hero refers to his " said uncle ;" but no uncle has before been mentioned, and the "kinsman " Harland, who finds a lodging for Philip with Master Rushworth, the timber-merchant, is clearly not an uncle. At the end of the book, Master Rushworth is converted into the kinsman himself. The punctuation, also, wants careful revision and correction.

The illustrations of the book are of various degrees of merit. The reproductions of the old views of Oxford, the Bodleian, Friar Bacon's House, London Bridge, and the last Abbot of Oseney are all good; but " A Halt of Officers," and " A Cavalry Skirmish," with their blue horses, though reproductions of well- known originals, are quite unworthy of the volume, while the apoplectic Pikeman opposite p. 126 is a ridiculous caricature of the figure admirably portrayed and embossed upon the cover of the book, and reminds us of the parody of an eminent tragedian that we sometimes see on the stage in a burlesque.

In this book, as in all that Professor Church writes, the moral and religious tone is sound and healthy, and few are the boys to whom it is given as a Christmas present who will not derive both instruction and entertainment from its pages. A special merit is the impartiality and fairness with which both sides in the great contest between the King and the Parliament are treated.

In a story dealing with Cavaliers and Roundheads, we generally find all our sympathies enlisted for the one, and our hatred or contempt for the other. But although the narrator of the story fights on the side of the King, he is in no degree blind to the faults of his own side, and does full justice, not only to the motives, but to the principles of his opponents.