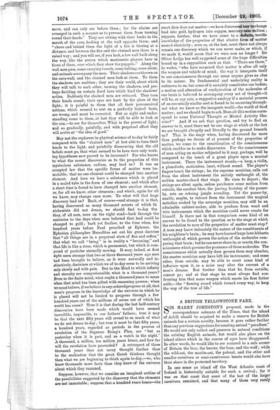 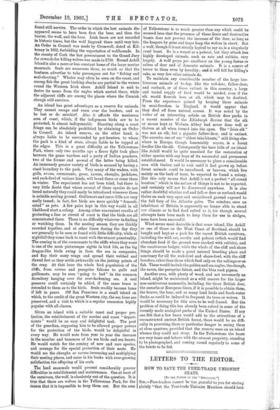 SIR HARRY JOHNSTON'S proposal, made in the correspondence columns of the Times, that the island of Achill should be acquired to make a reserve for British animals has a certain novelty, because it goes rather further than any previous suggestions for creating animal " paradises." He would not only collect and preserve in natural conditions the existing English animals, but would also place on the island others which in the course of ages have disappeared. In other words, he would like to see restored to a safe corner of Britain the bear, the beaver, the boar, and the wolf ; while the wild-cat, the martin-cat, the polecat, and the other and smaller carnivore or semi-carnivorous beasts would also have their share in the protected territory.

In one sense an island off the West Atlantic coast of Ireland is, historically suitable for such a revival; for it was on that coast that some of the last of the larger carnivore remained, and that many of those very rarely

found still survive. The order in which the lost animals dis- appeared seems to have been first the bear, and then the beaver, the wolf, and the boar. Irish bears are not recorded in historic times, but the wolf lingered there until very late. An Order in Council was made by Cromwell, dated at Kil- kenny in 1652,.forbidding the exportation of wolfhounds. In the county of Cork the last presentment to the Grand Jury for rewards for killing wolves was made in 1710. Round Achill Island is also a more or less constant home of the large marine mammals. Seals are numerous there, so much so that the boatmen advertise to take passengers out for " fishing and seal-shooting." Whales may often be seen on the coast, and among fish the great basking sharks are partial to the waters round the Western Irish shore. Achill Island is said to derive its name from the eagles which nested there, while the adjacent cliffs are among the places where the Cornish though still survives.

An island has great advantages as a reserve for animals. They cannot escape and roam over the borders, and so be lost or do mischief. Also it affords the maximum area of coast, which, if the indigenous birds are to be protected, is almost indispensable. Shooting along a coast fringe can be absolutely prohibited by obtaining an Order in Council. An inland reserve, on the other hand, is always liable to be surrounded by pot-hunters, to whom the park is a kind of store, always liable to be tapped at the 'edges. This is a great difficulty at the Yellowstone Park, where only two months ago a fierce fight took place between the game wardens and a party of Indian poachers, two of the former and several of the latter being killed. An immensely greater variety of birds is secured by having a Con' st boundary to the park. Very many of the waders, with gulls, swans, cormorants, geese, ravens, choughs, jackdaws, and rock-fowl of various kinds, will breed there or come there in winter. The experiment has not been tried, but there is very little doubt that where several of these species do not breed naturally they could easily be introduced wherever there is suitable nesting ground. Guillemots and razor-bills are very easily tamed; in fact, few birds are more quickly " domesti- cated " as pets. A few pairs kept in this way would in all likelihood start a colony. Among other convenient results of torotecting a line or circuit of coast is that the birds are all concentrated there. There is no difficulty whatever in finding Or watching them. In the nesting season they are thickly crowded together, and at other times during the day they are generally to be seen or found with little difficulty, while at nightfall they come back to roost with the utmost punctuality. The coming in of the cormorants to the cliffs where they roost is one of the most picturesque sights in bird life, as the big dragon-like birds swing in from the sea in companies, end flap their sooty wings and spread their webbed and dlawed feet as they settle awkwardly on the jutting points of the crag. At that hour the whole bird population of the cliffs, from ravens and peregrine falcons to gulls and guillemots, may be seen " going to bed " in the common dormitory hanging over the ever-darkening sea. A seal preserve could certainly be added, if the same truce is extended to them as to the birds. Seals readily become tame if left in peace. Off San Francisco is a small island on which, to the credit of the great Western city, the sea lions are preserved, and a visit to which is a regular excursion highly popular with all classes.

Given an island with a suitable coast and proper pro- tection, the establishment of the marine and coast " depart- ments " would be an easy and delightful task. The post of the guardian, supposing him to be allowed proper powers for the protection of the birds, would be delightful in every way. He would note from year to year the increase i.nthe number and tameness of his sea birds and sea beasts. He would watch for the coming of new and rare species, and arrange for the special protection of their nests. He would see the choughs or ravens increasing and multiplying their nesting places, and enter in his books with ever-growing satisfaction the offspring of his seals.

The land mammals would present considerably greater difficulties in establishment and maintenance. One at least of the carnivore, the wolf, is absolutely out of the question. It is true that there are wolves in the Yellowstone Park, for the reason that it is impossible to keep them out. But the area of Yellowstone is so much greater than any which could be secured here that the presence of these fierce and destructive beasts does not prevent the increase of the deer, so long as the keepers by guns and traps keep the wolves in check. But a wolf, though it is not strictly logical to say so, is a singularly cruel beast. So is a weasel or a polecat, but they attack leas

highly developed animals, such as rats and rabbits, very largely. A wolf preys par excellence on the young fawns or

calves of deer and of domestic animals. It is a source of terror to them even by heredity; and it will kill for killing's sake, as very few other animals do.

To maintain any considerable number of the large her- bivorous animals of to-day, like the red-deer, fallow-deer, and roebuck, or of those extinct in this country, a large and varied supply of food would be needed, even if the elk would flourish here at all, which may be doubted.

From the experience gained by keeping these animals in semi-freedom in England, it would appear that they died off from natural. causes. It was noted by the

thriven at all when turned into the open. The " Irish elk " was not an elk, but a gigantic fallow-deer, and is extinct. The aurochs, one of our " oldest inhabitants," still living else- where in Europe, though lamentably scarce, is a forest dweller like the elk. Consequently the bare hills of an island like Achill would be quite unsuited for the restoration of either species with any hope of its successful and permanent establishment. It would be necessary to plant a considerable area with timber, and to wait until it had grown up before forest animals could be introduced, or beavers, which live mainly on the bark of trees, be expected to found a colony. But this only means that Achill is not a perfect " all-round location," which in the nature of things is not to be expected, and certainly will not be discovered anywhere. It is also rather doubtful whether red and fallow deer or roebuck would thrive on such very open and unsheltered ground exposed to the full fury of the Atlantic gales. The reindeer, once an inhabitant of Britain. is apparently no longer able to stand our climate or to find food suited to it, for though several attempts have been made to keep them for use in sledges, none have been successful.

What seems most desirable is that some island, like Achill or one of those on the West Coast of Scotland, should be bought and kept as a park for the rarest British carnivore, including the wild cat, martin and polecat (which would find abundant food if the ground were stocked with rabbits), and the omnivorous badger, while the whole of the cliff and shore fringe should be made a great natural breeding place and sanctuary for all the rock-fowl and shore-fowl, with the cliff breeders, other than those which feed only on the settings or on fish. These would include the golden and sea eagles, the though, the raven, the peregrine falcon, and the blue rock pigeon.

Another area, with plenty of wood, and not necessarily an island, might be maintained as a wild reserve for the larger non-carnivorous mammalia, including the three British deer,

the aurochs or European bison, if it is possible to obtain them, the beaver, the boar, and as many land birds and fresh-water ducks as could be induced to frequent its trees or waters. It would be necessary for this area to be well fenced. But the problem of doing this has already been solved in some of the recently made zoological parks of the United States. If any one felt that a few bears would add to the attractions of a reconstructed ancient British forest, there would be no diffi- culty in procuring them or particular danger in seeing them at close quarters, provided that the reserve were on an island whence they could not stray. In the Yellowstone the bears are very tame and behave with the utmost propriety, standing to be photographed, and coming round regularly to some of the hotels to be fed.