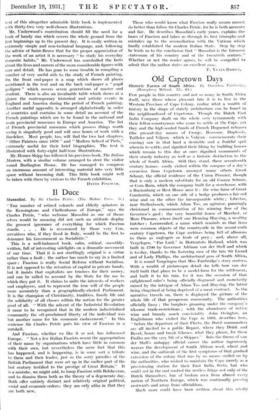 "THE number of retired colonels and elderly spinsters in the Kensingtons and Cheltenhams of Europe," says Sir Charles Petrie, "who welcome Mussolini as one of them- selves would be amusing did not such an attitude display the grossest ignorance of everything for which Fascism stands. . . . He is reverenced . by those very Con- servatives who, if they lived in Italy, would be the first to denounce his Government as Socialistic."

This is a well-balanced book, calm, critical, smoothly- written, full of interesting sidelights on a dramatic movement of our time. That it is not startlingly original is a virtue rather than a fault : the author has much to say in a limited space: Fascism is really Social Reform without Socialism. It is not opposed to the retention of capital in private hands, but it insists that capitalists are trustees for their money, and can be called to account by the State for the use to which they put it. It claims to unite the interests of workers and employers, and to represent the true will of the people more accurately than a geographically-elected Parliament. It is the champion of Christianity, tradition, family life and the solidarity of all classes within the nation for the greater good of all. "With the advent of the Industrial Revolution it came to be recognized that in the modern industrialized community the oft-proclaimed liberty of the individual was but another name for his economic enslavement." In this sentence Sir Charles Petrie puts his view of Fascism in a nutshell.

And Fascism, whether we like it or not, has influenced Europe. "Not a few Italian Fascists resent the appropriation of their name by organizations which have little in common with their own, but nevertheless the mere fact that this has happened, and is happening, is in some sort a tribute to them and their leader, just as the sorry parodies of the British Parliament that were set up in the earlier part of the last century testified to the prestige of Great Britain." It is a mistake, we might add, to lump Fascism with Bolshevism, and to dismiss 'them both as the theory of a degenerate day. Both offer entirely distinct and relatively original political, social and economic orders: they are only alike in that they _ are both new.

Those who would know what Fascism really means cannot do better than follow Sir Charles Petrie, for he is both accurate and fair. He describes Mussolini's early years, explains the bases of Fascism and takes us through its first triumphs anti mistakes up to the reconciliation with the Vatican which .finally established the modern Italian State. Step by step he leads us to the conclusion that " Mussolini is the foremost statesman of his country and of the twentieth century." 'Whether or not the reader agrees, he will be compelled to admit that the author states an excellent ease.