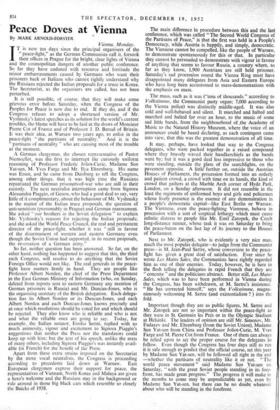 Vienna, Monday. IT is now ten days since the principal organisers of the " peace-fight," as the German Communists call it, forsook their offices in Prague for the bright, clear lights of Vienna and the cosmopolitan dangers of another public conference. So far they have endured with resource and fortitude the minor embarrassments caused by Germans who want their prisoners back or Italians who cannot rightly understand why the Rulsians rejected the Indian proposals for a truce in Korea. The Secretariat, as the organisers are called, has not been perturbed.

It is still possible, of course, that they will make some grievous error before Saturday, when the Congress of the Peoples for Peace is now due to end. If they do, and if the Congress refuses to adopt a shortened version of Mr. Vyshinsky's latest speeches as its solution for the world's current troubles, the blame will have to be laid at the doors of Monsieur Pierre Cot of France and of Professor J. D. Bernal of Britain. It was their idea, at Warsaw two years ago, to enlist in the peace-fight " the partisans of neutrality." And it is the ' partisans of neutrality " who are causing most of the trouble at the moment.

A German clergyman, the chosen representative of Pastor Niemoeller, was the first to interrupt the curiously uniform reasoning of Professor Frederic Joliot-Curie, Madame Sun Yat-sen, M. Yves Farge and Mr. Ilya Ehrenburg. His name was Essen, and he came from Duisburg to tell the Congress, among other things, that it was high time the Russians repatriated the German prisoners-of-war who are still in their custody. The next neutralist interruption came from Signora Alessandra Piaggio, of Genoa, who had a good deal to say, very little of it complimentary, about the behaviour of Mr. Vyshinsky in the matter of the Indian truce proposals, the question of anti-semitism (presumably in Prague) and German rearmament. She asked " our brothers in the Soviet delegation " to explain Mr. Vyshinsky's reasons for rejecting the Indian proposals; and she asked the World Peace Council, the real and permanent director of the peace-fight, whether it was " still in favour of the disarmament of western and eastern Germany even though the Soviet Union had supported, in its recent proposals, the re-creation of a German army."

So far, neither question has been answered. So far, on the other hand, nothing has happened to suggest that this, the third such Congress, will resolve to do anything that the Soviet Foreign Office would not like. The real generals in the peace- fight have matters firmly in hand. They are people like Professor Albert Norden, the chief of the Press Department in the East German Ministry of Information (who, on Sunday, deleted from reports sent to eastern Germany any mention of German prisoners in Russia) and Mr. Duncan-Jones, who is the organising secretary of the British delegation. Each delega- tion has its Albert Norden or its Duncan-Jones, and each Albert Norden and each Duncan-Jones knows precisely and at once which resolutions should be voted for and which should be rejected. They also know who is reliable and who is not and what the reliable ones are going to say. Today, for example, the Italian senator, Emilio Serini, replied with so much animosity, vigour and excitement to Signora Piaggio's suggestions that neither the Press nor the translators could keep up with him; but the text of his speech, unlike the texts of many others, including Signora Piaggio's was instantly avail- able (in French) for the benefit of the Press.

Apart from these extra strains imposed on the Secretariat by the more vocal neutralists, the Congress is proceeding according to precedents laid down at Warsaw. East European clergymen express their support for peace, the representatives of Vietnam, North Korea and Malaya are given a hero's welcome and the Russians stay in the background or ride around in those big black cars which resemble so closely the Buicks of 1938. The main difference in procedure between this and the last conference, which was called "The Second World Congress of the Partisans of Peace," is that the first was held in a People's Democracy, while Austria is happily, and simply, democratic. The Viennese cannot be compelled, like the people of Warsaw, to demonstrate spontaneously for this or that. In particular they cannot be persuaded to demonstrate with vigour in favour of anything that seems to favour Russia, a country where, so far as they know, 1,900 Austrians are still held prisoner. Saturday's sad procession round the Vienna Ring must have disappointed many delegates from Asia and Eastern Europe who have long been accustomed to mass-demonstrations with the emphasis on mass.

The mass, such as it was ("tens of thousands " according to Volkstimme, the Communist party organ; 7,000 according to the Vienna police) was distinctly middle-aged. It was also cold and well-behaved and silent. It marched and halted and marched and halted fpr over an hour, to the music of some sad little bands, from the neighbourhood of „the Academy of Music to the Natural History Museum, where the voice of an announcer could be heard declaring, as each contingent came into view, that this was the greatest demonstration of all time.

It may, perhaps, have looked that way to the Congress delegates, who were packed together in a raised compound where they bravely waved their handkerchiefs as the bands went by; but it was a good deal less impressive to those who were standing, outside the blare of the searchlights, on the pavement opposite. A little further on, outside the Austrian Houses of Parliament, the procession formed into an orderly and patient crowd, a crowd with time on its hands, the kind of crowd that gathers at the Marble Arch corner of Hyde Park, London, on a Sunday afternoon. It did not resemble in the least the. regiments of uniformed boys and girls and policemen whose lively presence is the essence of any demonstration in a people's democratic capital—like East Berlin or Warsaw. The Viennese, even the peace-fighting Viennese, behave in procession with a sort of sceptical lethargy which must cause infinite distress to people like Mr. Emil Zatopek, the Czech long-distance runner, whose task it was on Saturday to bring the peace-baton on the last lap of its journey to the Houses of Parliament.

Next to Mr. Zatopek, who is evidently a very nice man, much the most popular delegate—tojudge from the Communist press—is M. Jean-Paul Sartre, whose conversion to the peace- fight has given a great deal of satisfaction. Ever since he wrote Les Mains Sales, the Communists have rightly regarded him as one of their enemies. Today, however, he is here in the flesh telling the delegates in rapid French that they are " concrete " and the politicians abstract. Better still, Les Mains Sales, which was to have been performed in Vienna during the Congress, has been withdrawn, at M. Sartre's insistence. " He has corrected himself," says the Volkstimrne, magna- nimously welcoming M. Sartre (and existentialism ? ) into the fold.

Important though they are as public figures, M. Sartre and Mr. Zatopek are not so important within the peace-fight as they were in St. Germain les Pres or in the Olympic Stadium at Helsinki. The leaders of opinion are still Mr. Simenov, Mr. Fadayev and Mr. Ehrenburg (from the Soviet Union), Madame Sun Yat-sen from China and Professor. Joliot-Curie, M. Yves Farge and M. Pierre Cot from France. One of them can always be relied upon to set the proper course for the delegates to follow. Even though the Congress has four days still to run it is safe enough to predict that the,official course, set this year by Madame Sun Yat-sen, will be followed all right in the end —whether the partisans of neutrality like it or not. " The world peace movement " said Madame Sun Yat-sen on Saturday, " with the great Soviet people standing' in its fore- front, has made great. progress." The progress it will make in the months to come may be unpredictable as yet, even by Madame Sun Yat-sen. but there can be no doubt whatever about who will be standing in the forefront.