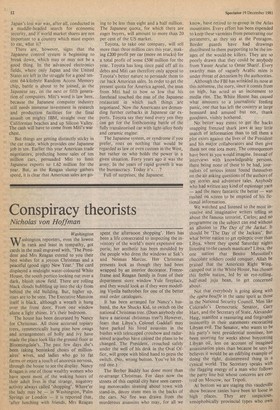 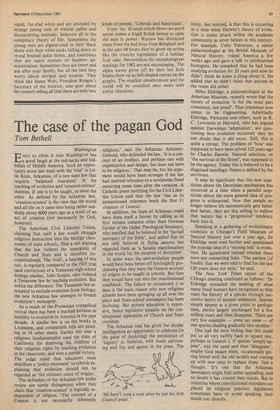 Washington reporters, even the lowest in rank and least in sympathy, got cards in the mail engraved with, 'The President and Mrs Reagan extend to you their best wishes for a joyous Christmas and a peaceful (good sign) New Year.' The card displayed a midnight water-coloured White House, the south portico looking out over a dark, bluish snow field. There are rolling black clouds bubbling up into the sky from behind the old building. But, higher up, stars are to be seen. The Executive Mansion itself is black, although a wreath is hung over the front door. From one window alone a light shines. It's their bedroom.

The house has been decorated by Nancy for Christmas. All those accursed topiary trees, symmetrically hung pine bow swags and arrangements of holly and ivy have made the place look like the ground floor at Bloomingdale's. The past few days she's been taking beminked choirs of millionaires' wives, and ladies who go to fat farms or enjoy a touch of anorexia nervosa, through the house to see the display. Nancy Reagan is one of those wealthy women who have spent most of the waking hours of their adult lives in that strange, nugatory activity always called 'shopping'. Where'er the lady may be — in Washington, Palm Springs or London — it is reported that, 'after lunching with friends, Mrs Reagan spent the afternoon shopping'. Hers has been a life consecrated to inspecting the inventory of the world's more expensive emporia; her aesthetic has been moulded by the people who dress the windows at Sak's and Neiman Marcus. Her Christmas presents look as though they had been wrapped by an interior decorator. Freezeframe and Reagan family in front of their department store window Yule fireplace, and they would look as if they were modelling Viyella bathrobes for one of the better mail order catalogues.

It has been arranged for Nancy's husband, the Aw Shucks Kid, to switch on the national Christmas tree. (Does anybody else have a national christmas tree?) However, fears that Libya's Colonel Gaddafi may have parked his hired assassins in the bushes with telescoped crossbow and radaraimed arquebus have caused the plans to be changed. The President, crouched safely under the well of his desk in the Oval Office, will grope with blind hand to press the switch. (No, wrong button. You've hit the red one.) The Berber Baddy has done more than re-arrange Christmas. For days now the streets of this capital city have seen careering motorcades sirening about town with stand-in, decoy stunt men in the backs of the cars. No fire was drawn from the murderous assassins who may, for all we know, have retired to re-group in the Atlas mountains. Every effort has been expended to keep these varmints from penetrating our perimeters, as they say at the Pentagon. Border guards have had drawings distributed to them purporting to be the images of the would-be killers. They are so poorly drawn that they could be anybody from Yasser Arafat to Omar Sharif. Every swarthy man of vaguely Arabic mien is under threat of detention by the authorities.

Although the FBI has wrinkled its nose at this nonsense, the story, since it comes from on high, has acted as an incitement to media riot. The White House has caused what amounts to a journalistic feeding panic, one that has left the country at large bemused and amused but not, thank goodness, visibly bothered.

No better way exists to get the hacks snapping frenzied shark jaws at any little snatch of information than to tell them a plot exists against the lives of the President and his major collaborators and then give them not one iota more. The consequences have been as you would imagine. Instead of interviews with knowledgeable persons, there being none of these to be had, journalists of serious intent found themselves on the air asking questions of the authors of spy stories and adventure tales. Anybody who had written any kind of espionage yarn — and the more fantastic the better — was rushed on screen to be emptied of his fictional information.

We watched and listened to the most inventive and imaginative writers telling us about the famous terrorist, Carlos; and no programme on the subject can end without an allusion to The Day of the Jackal. It should be 'The Day of the Jackass'. But what better nation to get epileptic over than Libya, where they spend Saturday nights listening to the camels masticate? Libya, the one nation that Benito Mussolini's chocolate soldiers could conquer. Allah be praised that the American Right Wing, camped out in the White House, has chosen this feeble nation, led by an eye-rolling, half-mad juju bean, to get concerned about.

Not that everybody is going along with the opera bouffe in the same spirit as those in the National Security Council. Men like Colorado's Democratic Senator, Gary Hart, and the Secretary of State, Alexander Haig, manifest a reassuring and forgivable insincerity in their statements excoriating Libyan evil. The Senator, who wants to be his party's next presidential nominee, has been snorting for weeks about boycotting Libyan oil, less on account of imagined assassination plots than because he says he believes it would be an edifying example of doing the right, disinterested thing in a cynical world. The Secretary speaks with the flagging energy of a man who follows the party line but whose concerns are centred on Moscow, not Tripoli.

At bottom we are staging this vaudeville show because zanies have been let loose in high places. They are suspicious, xenophobically provincial types who own • vapid, fur-clad wives and are attended by strange young men of whitish pallor and disconcerting intensity, believers all in the . conspiracy theory of life. Sometimes the young men are pigeon-toed in their black shoes with their white socks falling down to reveal bruised ankle bones, and sometimes they are suave masters of business administration. Sometimes they are sweet and ask after your family, but all the time they worry about intrigue and treason. They think like James Watt, President Reagan's Secretary of the Interior, who goes about the country telling all that there are only two kinds of people, 'Liberals and Americans'.

From the ill-wind-which-blows-no-good sector comes a frigid Polish breeze to calm the men in power. Warsaw has distracted them from the bad boys from Benghazi and in the past 48 hours they've given up acting like the crunchy ingredients of a holiday fruit cake. Nevertheless the encephalogram readings for 1982 are not encouraging. The alpha waves given off by their hot little brains show up as bell-shaped curves on the graphs. The smallest misadventure and the world will be assaulted once more with awful vibrations.