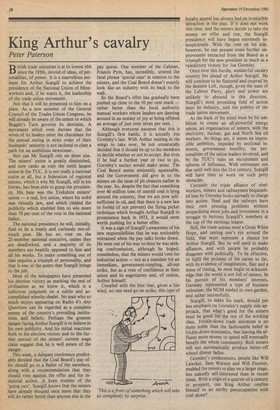 British trade unionism is at its lowest ebb since the 1930s, devoid of ideas, of personalities, of power. It is a marvellous moment for Arthur Scargill to achieve the presidency of the National Union of Mineworkers and, if he wants it, the leadership of the trade union movement.

Not that it will be presented to him on a plate. As a new member of the General Council of the Trades Union Congress, he will already be aware of the extent to which Buggin's Turn governs its destinies. A movement which even decrees that the wives of its leaders enter the charabanc for the annual outing in strict order of their husbands' seniority is not inclined to clear a path for an ambitious newcomer.

Nor can Mr Scargill rely on sheer size. The miners' union is greatly diminished, and now ranks as only the tenth largest union in the TUC. It is not really a national union at all, but a federation of regional unions, which is why Mr Scargill, still in his forties, has been able to grasp the presidency. His base was the Yorkshire miners' union — a real, live union, where his word was virtually law, and which yielded the publicity which enabled him to win more than 70 per cent of the vote in the national ballot.

The national presidency he will, initially, find to be a lonely and curiously out-oftouch post. He has no vote on the 25-member national executive, unless they are deadlocked, and a majority of its members are heartily opposed to him and all his works. To make something out of that requires a triumph of personality, and that is one of the assets that Scargill brings to the job.

Most of the newspapers have presented his election victory as marking the end of civilisation as we know it, which is a ludicrous judgment on a subtle and accomplished wheeler-dealer. No man who so much enjoys appearing on Radio 4's Any Questions can be regarded as a complete enemy of the country's prevailing institutions and beliefs. Perhaps the greatest danger facing Arthur Scargill is to believe in his own publicity. And his initial reactions both to his election victory and to the further pursuit of the miners' current wage claim suggest that he is well aware of the danger.

This week, a delegate conference predictably decided that the Coal Board's pay of fer should go to a ballot of the members, along with a recommendation that they should vote against the offer and for in dustrial action. A keen student of the 'going rate', Scargill knows that the miners have already ensured once more that they will do rather better than anyone else in the pay queue. One member of the Cabinet, Francis Pym, has, incredibly, uttered the fatal phrase 'special case' in relation to the miners, and the Coal Board doesn't exactly look like an industry with its back to the wall.

So the Board's offer has gradually been pushed up close to the 10 per cent mark — rather better than the local authority manual workers whose leaders are dancing around in an ecstasy of joy at being offered an average of just over seven per cent.

Although everyone assumes that this is Scargill's first battle, it is actually Joe Gormley's last. With Arthur waiting in the wings to take over, he not unnaturally decided that it should be up to the members to decide whether or not to accept. But even if he had a further year or two to go, Gormley's tactics would make sense. The Coal Board seems eminently squeezable, and the Government did give in to the miners on the issue of pit closures earlier in the year. So, despite the fact that something over 40 million tons of unsold coal is lying around the country, that we are now selfsufficient in oil, and that there is a new law to forbid (if not prevent) the flying picket technique which brought Arthur Scargill to prominence back in 1973, it would seem worth pushing for a better offer.

It was a sign of Scargill's awareness of his new responsibilities that he was noticeably restrained when the pay talks broke down. He went out of his way to deny he was seeking confrontation, although he hoped, nonetheless, that the miners would vote for industrial action — not as a mandate for an immediate, government-toppling, all-out strike, but as a vote of confidence in their union and its negotiators and, of course, Arthur himself.

Coupled with the hint that, given a fair wind, no one need go on strike, this type of loyalty appeal has always had an irresistible attraction in the past. If it does not work this time, and the miners decide to take the money on offer and run, the Scargill presidency will have begun extremely in auspiciously. With the vote on his side, however, he can present some further improvement extracted from the Board as a triumph for the new president as much as a valedictory victory for Joe Gormley.

Once over this hurdle, wonderful cavalry country lies ahead of Arthur Scargill. He will continue to be flattered and courted by the Bennite Left, though, given the state of the Labour Party, glory and power are unlikely to abound in this direction. Scargill's most promising field of action must be industry, and the politics of the trade union movement.

At the back of his mind must be his ambition to create an all-powerful energy union, an organisation of miners, with the electricity, nuclear, gas and North Sea oil workers. As things are, it seems an impos sible ambition, impeded by sectional in terests, government hostility, the personalities of the union leaders involved, and by the TUC's rules on recruitment and spheres of influence. With retirement not due until well into the 21st century, Scargill will have time to work on such petty obstacles.

Certainly the triple alliance of steelworkers, miners and railwaymen bequeath ed him by Gormley looks unready to charge into action. Steel and the railways have their own pressing problems without jeopardising more jobs and investment in a struggle to buttress Scargill's members at the top of the earnings league.

Still, the trade unions need a Great White Hope, and casting one's eye around the field, that must represent a chance for Arthur Scargill. But he will need to make alliances, and with people he probably disagrees with politically. To be effective, to fulfil the promise of his career so far, with its evidence of imagination, flair and a sense of timing, he must begin to acknowl edge that the world is not full of miners. In his pursuit of his members' interests, Gormley represented a type of business unionism: the NUM tended its own garden, and rather successfully.

Scargill, to make his mark, should put less emphasis on Gormley's supply side ap proach, that what's good for the miners must be good for the rest of the working class. Trickle-down trade unionism is no more noble than the fashionable belief in trickle-down economics, that leaving the affluent more money to spend will eventually benefit the whole community. Rich miners will not automatically produce better-off school dinner ladies.

Gormley's predecessors, people like Will Lawther, Sam Watson and Will Paynter, enabled the miners to play on a larger stage, less nakedly self-interested than in recent times. With a reign of a quarter of a century in prospect, can King Arthur confine himself to an earthy preoccupation with coal alone?