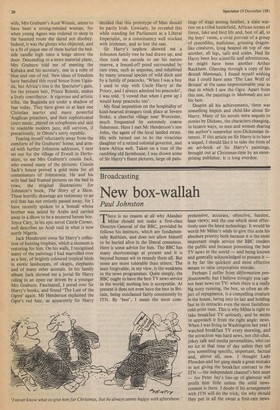 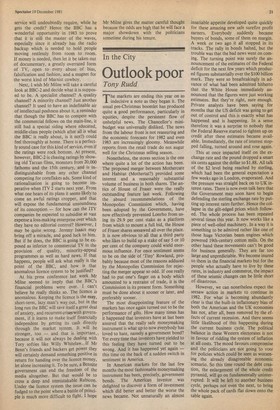 There is no reason at all why Alasdair Milne should not make a first-class Director-General of the BBC, provided he follows his instincts, which are fundamentally Reithian, and does not allow himself to be buried alive in the liberal consensus. Here is some advice for him. The BBC has many shortcomings at present and it is beyond human wit to remedy them all. But some are more tolerable than others. The least forgivable, in my view, is the weakness in the news programmes. Quite simply, the BBC ought to have the best TV news service in the world; nothing less is acceptable. At present it does not even have the best in Britain, being outclassed fairly consistently by ITN. By 'best', I mean the most com prehensive, accurate, objective, hardest, least viewy; and the one which most effectively uses the latest technology. It would be worth Mr Milne's while to give this area his absolute priority both because it is the most important single service the BBC renders the public and because possessing the best TV news in the world — and being known and generally acknowledged to possess it — is by far the quickest and most effective means to raise corporation morale.

Perhaps I suffer from deformation professionnelle, but I believe strongly you cannot beat news on TV: when there is a really big story running, the box, so often an object of repugnance, is a compelling creature in the house, luring into its lair and holding fast in its tentacles even the most fastidious cold-print man. This is why Milne is right to take breakfast TV seriously, and he seems to approach it from the right angle: news. When I was living in Washington last year I watched breakfast TV every morning, and the attraction was hard news, not chit-chat, jokey talk and media personalities, who cut no ice at that time of day unless they tell you something specific, important, factual and, above all, new. I thought Lady Plowden and her gang made a great mistake in not giving the breakfast contract to the ITN — the independent channel's best asset — for Peter Jay's line-up of glamour will profit him little unless the solid newscontent is there. I doubt if his arrangement with ITN will do the trick, for why should they put in all the sweat a first-rate news service will undoubtedly require, while he gets the credit? Hence the BBC has a wonderful opportunity in 1983 to prove that it is still the master of the waves, especially since it already has the radio backup which is needed to hold people moving restlessly from room to room. If money is needed, then let it be taken out of documentary, a greatly overrated form of TV, open to every abuse of bias, falsification and fashion, and a magnet for the worst kind of Marxist cowboy.

Next, I wish Mr Milne will take a careful look at BBC-2 and decide what it is supposed to be. A specialist channel? A quality channel? A minority channel? Just another channel? It used to have an indefinable air of intellectual poshness about it, a reminder that though the BBC has to compete with the commercial fellows on the main-line, it still had a special siding where educated, middle-class people (which after all is what the BBC is really about, is it not?) could feel thoroughly at home. There is a perfectly sound case for this kind of service, even if the ratings were rock bottom. At present, however, BBC-2 is chasing ratings by showing old Tarzan films, monsters from 20,000 fathoms and the 15th century, and is indistinguishable from any other channel competing for cornflakes ads. Some kind of rationalisation is going to become imperative when ITV 2 starts next year. From what one hears of its plans it seems likely to come an awful ratings cropper, and that will expose the fundamental unsoundness of its conception — for how can the ITV companies be expected to subsidise at vast expense a loss-making enterprise over which they have no editorial control? However, I may be quite wrong. Jeremy Isaacs may bring off a miracle, and good luck to him. But if he does, the BBC is going to be exposed as inferior to commercial TV in the provision of quality, minority-appeal programmes as well as hard news. If that happens, people will ask what really is the point of the BBC, and how is that anomalous licence system to be justified?

At his press conference last week Mr Milne seemed to imply that the BBC's financial problems were over. I can't believe he really thinks so. The licence is anomalous. Keeping the licence is the easy, short-term, lazy man's way out, but in the long run the BBC will save itself a great deal of anxiety, and recurrent crisesvith government, if it learns to make itself financially independent by getting its cash directly through the market system. It will be stronger, too — and that is important, because it will not always be dealing with Tory softies like Willy Whitelaw. If Mr Benn's friends and backers get power they will certainly demand something positive in return for handing over the licence money, let alone increasing it. To be sure, a Bennite government can end the freedom of the media altogether. But that would be to cross a deep and unmistakable Rubicon. Under the licence system the issue can be fudged to the point where a battle of principle is much more difficult to fight. I hope Mr Milne gives the matter careful thought because the odds are high that he will face a major showdown with the politicians sometime during his tenure.