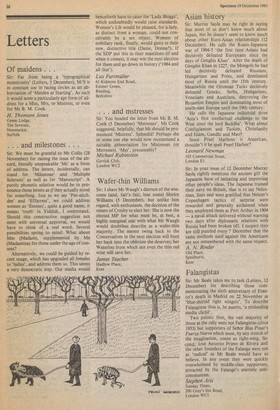 Sir: In your issue of 12 December Murray Sayle rightly

mentions the ancient gift the Japanese have of imitating and improving other people's ideas. The Japanese trained their navy on British, that is to say Nelsonian, lines and were gratified that Nelson's Copenhagen tactics of surprise were rewarded and generally acclaimed when they employed them at Port Arthur in 1904 — a naval attack delivered without warning two days after diplomatic relations with Russia had been broken off. I suspect they are still puzzled every 7 December that the same methods used against the Americans are not remembered with the same respect.