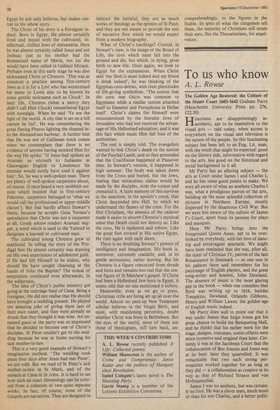 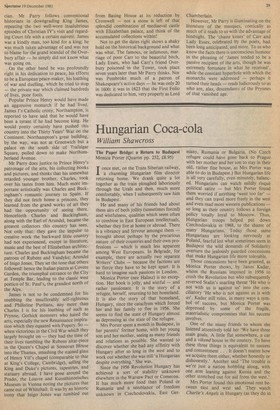 To us who know

The Golden Age Restored: the Culture of the Stuart Court 1603-1642 Graham Parry (Manchester University Press pp. 276, £22.50) Historians are disappointingly inaesthetic, apt to be insensitive to the visual arts — odd today, when accent is everywhere on the visual and television is the opium of the people. So this fascinating subject has been left to an Eng. Lit. man, with the result that might be expected: good on the literary side, informative with regard to the arts, less good on the historical and social background to it all.

Mr Parry has an alluring subject — the arts at Court under James I and Charles I, and he has some good points to make. We were all aware of what an aesthete Charles I was, what a prodigious patron of the arts, building up the most splendid collection of pictures in Northern Europe, mostly dispersed by the disastrous Civil War. But we were less aware of the culture of James I's Court, apart from its passion for plays and masques.

Here Mr Parry brings into the foreground Queen Anne, apt to be overlooked by everybody, with her love of dancing and extravagant spectacle. We might have been reminded that she was, after all, the sister of Christian IV, patron of the late Renaissance in Denmark — as one sees in his palaces there and remembers for his patronage of English players, and the great song-writer and lutenist, John Dowland. The absence of music is the most glaring gap in the book — when one considers that Byrd was writing up to 1616, besides Tompkins, Dowland, Orlando Gibbons, Henry and William Lawes: the golden age of English music indeed.

Mr Parry does well to point out that it was under James that Inigo Jones got his great chance to build the Banqueting Hall, and he thinks that his earlier work for the stage, designs, costumes, scenic effects were more inventive and original than later. Certainly it was at the Jacobean Court that the collaboration of Ben Jonson and Jones was at its best: later they quarrelled. It was remarkable that two such strong personalities worked together for as long as they did — a collaboration as creative in its way as that of Richard Strauss and von Hofmannsthal.

James I was no aesthete, but was certainly no fool. He was a clever man, much more so than his son Charles, and a better politi cian. Mr Parry follows conventional historians in downgrading King James, repeating the two well-worn insalubrious episodes of Christian IV's visit and regarding Court life with a certain naivete. James was a kindly man, too kind for a king; he was much taken advantage of and was not to blame for the grand scandal of the Overbury affair — he simply did not know what was going on.

On the other hand he was profoundly right in his dedication to peace, his efforts to be a European peace-maker, his loathing of war and duelling, which he tried to stop — the private war which claimed hundreds of lives, poor fools.

Popular Prince Henry would have made an aggressive monarch if he had lived. James l's Catholic crony, Northampton, is reported to have said that he would have been a tyrant if he had become king. He would pretty certainly have pushed this country into the Thirty Years' War on the Continent. Northampton's great building, by the way, was not at Greenwich but a palace on the south side of Trafalgar Square, pulled down to make Northumberland Avenue.

Mr Parry does justice to Prince Henry's patronage of the arts, his collecting books and pictures, and thinks that his somewhat retarded younger brother, Charles, took over his tastes from him. Much more important artistically was Charles and Buckingham's romantic journey to Spain. If they did not fetch home a princess, they learned from the grand works of art they had the opportunity of seeing there. Henceforth Charles and Buckingham, along with the Earl of Arundel, became the greatest collectors this country has seen. Not only that: they gave the impulse to creative work the backward little country had not experienced, except in literature, music and the best of Elizabethan architecture. Charles and Buckingham became the patrons of Rubens and Vandyke; Arundel of Inigo Jones. They set the tone that others followed: hence the Italian piazza at Covent Garden, the triumphal entrance to the City at Temple Bar, leading to the classic west portico of St. Paul's, the grandest north of the Alps. James is not to be condemned for his snubbing the insufferably self-righteous and Philistine Puritans, any more than Charles I is for his loathing of such as Prynne, Gothick monsters who hated the arts, especially the new Renaissance inspiration which they equated with Popery. So — when victorious in the Civil War which they largely brought on — they had the time of their lives tumbling the Rubens altar-Piece in the Queen's Chapel at Somerset House into the Thames, smashing the stained glass of Henry VII's chapel (comparable to that at King's College, Cambridge), selling the King and Duke's pictures, tapestries, and statuary abroad. I have gone around the Prado, the Louvre and Kunsthistorisches Museum in Vienna noting the pictures that came out of Whitehall. It was by an historic irony that Inigo Jones was tumbled out from Basing House at its reduction by Cromwell — not a stone is left of that splendid combination of -mediaeval castle with Elizabethan palace, and think of the accumulated collections within!

Not to get the dates right shows a shaky hold on the historical background and what was what. The famous, or infamous, marriage of poor Carr to the beautiful bitch, Lady Essex, who had Carr's friend Overbury poisoned in the Tower, took place seven years later than Mr Parry thinks. Nor was Pembroke much of a patron of Shakespeare's active days — he was only 20 in 1600: it was in 1623 that the First Folio was dedicated to him, very properly as Lord Chamberlain.

However, Mr Parry is iliuminating on the literature of the masques, comically as much of it reads to us with the advantage of hindsight. The 'chaste kisses' of Carr and Lady Essex, celebrated ey the poets, had been long anticipated, and more. To us who know the facts there is unconscious humour in the phrasing of 'James tended to be a passive recipient of the arts, though he was extremely fortunate in what he received', while the constant hyperbole with which the monarchs were addressed — perhaps it turned their heads — reads ludicrously to us who are, alas, descendants of the Prynnes of that vanished age.