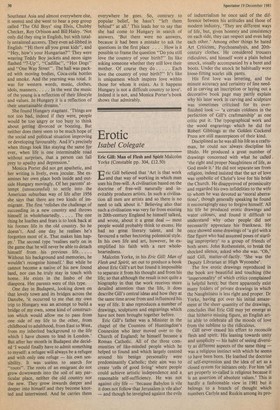 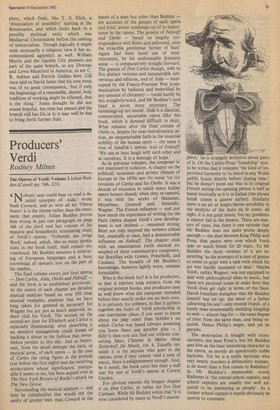 Eric Gill: Man of Flesh and Spirit Malcolm Yorke (Constable pp. 304, £12.50) 1E' ric Gill believed that 'Art is that work Land that way of working in which man uses his free-will. A civilisation based on the doctrine of free-will naturally and inevitably produces artists. In such a civilisation all men are artists and so there is no need to talk about it.' Believing also that such a civilisation was very far from existing in 20th-century England he himself talked, and wrote, about it a great deal — most people would probably think to excess. He had no great literary talent, and he favoured a rather hectoring polemical style. In his own life and art, however, he exemplified his faith with a rare wholeheartedness.

Malcolm Yorke, in his Eric Gill: Man of Flesh and Spirit, set out to produce a book about Eric Gill's art but found it impossible to separate it from his thought and from his life; so that although the result is not quite a biography in that the work receives more detailed attention than the life, it does describe Gill's central ideas and how they at the same time arose from and influenced his way of life. It also reproduces a number of drawings, sculptures and engravings which have not been brought together before.

Eric Gill's father was a Minister in the chapel of the Countess of Huntingdon's Connexion who later moved over to the Church of England; he himself became a Roman Catholic. All of the three communities of like-minded people which he helped to found and which largely centred around his benign personality were predominantly Catholic; their aim was to create 'cells of good living' where people could achieve artistic independence and a reasonable self-sufficiency. He was not against city life — 'because Babylon is vile it does not follow that Jerusalem is vile also' — and though he inveighed against the evils of industrialism he once said of the difference between his attitudes and those of modern industry, 'They are different ways of life, but, given honesty and consistency on each side, they can respect and even help each other.' Among other things he hated Art Criticism, Psychoanalysis, and 20th century clothes. He considered trousers ridiculous, and himself wore a plain belted smock, usually accompanied by a beret and boots. Under the smock he habitually wore loose-fitting scarlet silk pants.

His first love was lettering, and the minute accuracy and certainty of line need ed in carving an inscription or laying out a decorative book page may partly explain why his later work in carving and sculpture was sometimes criticised for its over finished look — 'a certain coldness in the perfection of Gill's craftmanship' as one critic put it. The typographical work and the wood engravings which he did for Robert Gibbings at the Golden Cockerel Press are still masterpieces of their kind.

Disciplined as he was all his life as a craftsman, he could not always discipline his libido. He produced a great number of drawings concerned with what he called 'the right and proper Naughtiness of life, as God made it.' He did not separate sex from religion, indeed insisted that the act of love was symbolic of Christ's love for his bride the Church. He disapproved of promiscuity and regarded his own infidelities to the wife to whom he was devoted as 'moral aberra tions', though generally speaking he found it encouragingly easy to forgive himself. All his life he produced erotic drawings and water colours, and found it difficult to understand why other people did not necessarily appreciate his frankness. He once showed some drawings of 'a girl with a fine figure who had assumed poses of startling impropriety' to a group of friends of both sexes. John Rothenstein, to break the shocked silence, asked who she was. `Oh,' said Gill, matter-of-factly. 'She was the Deputy Librarian at High Wycombe'.

Gill never ceased his effort to reconcile flesh and spirit. His leaning towards unity and simplicity — his habit of seeing diversi ty as different aspects of the same thing — was a religious instinct with which he seems to have been born. He loathed the doctrine of self-expression and the idea of art as a closed system for initiates only. For him 'all art properly so-called is religious because it is an assertion of absolute values.' This is hardly a fashionable view in 1981 but it belongs to a branch of thought which numbers Carlyle and Ruskin among its pro phets, which finds, like T. S. Eliot, a 'dissociation of sensibility' starting at the Renaissance, and which looks back to a possibly mythical unity which was Mediaeval Christendom before the coming of industrialism. Though logically it might seem necessarily a religious view it has accommodated agnostics as well. William Morris and the Garden City pioneers are part of the same branch, so are Thoreau and Lewis Mumford in America, so are C. R. Ashbee and Patrick Geddes here. Gill once said to David Jones that his own work was of no great consequence, 'but if only the beginnings of a reasonable, decent, holy tradition of working might be effected, that is the thing.' Jones thought he did not sound hopeful, but time has passed and the branch still has life in it; it may well be due to bring forth further fruit.