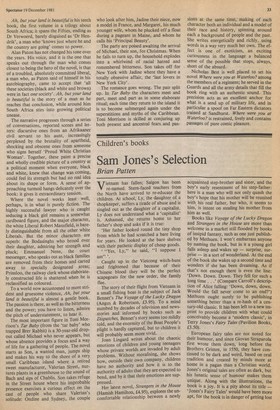 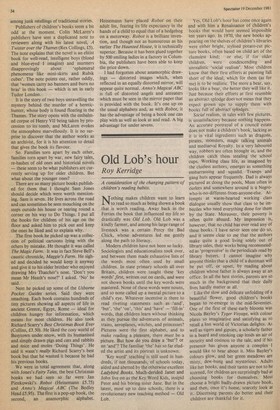 Vietnam has fallen; Saigon has been re-named. Stern-faced teachers from the North have arrived to re-educate the children. At school, Ly, the daughter of, a shopkeeper, suffers a tirade of abuse and is singled out as the daughter of a capitalist. Ly does not understand what a 'capitalist' is. Ashamed, she returns home to her father's shop and asks if it is true: 'Her father looked round the tiny shop from which he had scratched a bare living for years. He looked at the bare shelves with their pathetic display of cheap goods. "Yes, Ly," he said, "I suppose I am" '.

Caught up in the Vietcong witch-hunt and frightened that because of their Chinese blood they will be the perfect scapegoats for the new order, the family flee.

The story of their flight from Vietnam in a small fishing boat is the subject of Jack Bennet's The Voyage of the Lucky Dragon (Angus & Robertson, f3.95). To a mind numbed by decades of television and newsstories and informed by books such as Dispatches, Bennet's story seems too mildly told, and the enormity of the Boat People's plight is hardly captured, but to children it will probably seem more vivid. Joan Lingard writes about the chaotic emotions of children and young teenagers whose private worlds are invaded by adult problems. Without moralising, she shows how, outside their own company, children have no authority and how it is to the authority of adults that they are expected to bend, and by it that their emotions are sup pressed. Her latest novel, Strangers in the House (Hamish Hamilton, f4.95), explores the uncomfortable relationship between a newly acquainted step-brother and sister, and the boy's early resentment of his step-father: here is a man who will not only quash the boy's hope that his mother will be reunited with his real father, but who, it seems to him, is intent on stealing his mother from him as well.

Books like Voyage of the Lucky Dragon and Strangers in the House are more than welcome in a market still flooded by books of insipid fantasy, such as one just published by Methuen. I won't embarrass anyone by naming the book, but in it a young girl falls asleep and wakes up — surprise, surprise — in a sort of wonderland. At the end of the book she wakes up a second time and wonders if she has been dreaming. As if that's not enough there is even the line: 'Down. Down. Down. They fell for such a long time . .' (Compare Carroll's description of Alice falling: 'Down, down, down. Would the fall never come to an end?') Methuen ought surely to be publishing something better than a re-hash of a century-old classic. It has been left to a new imprint to provide children with what could conceivably become a 'modern classic', in Terry Jones's Fairy Tales (Pavilion Books, European fairy tales are not noted for their humour, and since Giovan Straparola first wrote them down, long before the Brothers Grimm, in 1550, they have continued to be dark and weird, based on oral tradition and created by minds more at home in a pagan than a Christian world. Jones's original tales are often as dark, but his lunatic sense of humour makes them unique. Along with the illustrations, the book is a joy. It is a pity about its title 'Jones's Fairy Tales' would have been more apt, for the book is in danger of getting lost among junk retellings of traditional stories. Publishers of children's books seem a bit odd at the moment. Colin McLaren's publishers have sent a duplicated note to reviewers along with his latest novel, A Twister over the Thames (Rex Collings, £5).

The note explains that the novel is an elitist book for well-read, intelligent boys (blond and blue-eyed I imagine) and murmers disapprovingly about 'ephemeral phenomena like mini-skirts and Rubik cubes'. The note points out, rather oddly, that 'women carry no banners and burn no bras' in this book — which is set in early Tudor London.

It is the story of two boys unravelling the mystery behind the murder of a heretic hunter, whose body is found floating in the Thames. The story opens with the embalmed corpse of Henry VII being taken by pro cession to its tomb, and McLaren evokes the atmosphere marvellously. It is no surprise to discover that the author works as an archivist, for it is his attention to detail that gives the book its flavour.

There are so many picture books published for them that I thought Sam Jones should decide which were worth mention ing. Sam is seven. He lives across the road and can sometimes be seen mouching on the steps outside his house or tearing round a corner on his way to Do Things. I put all the books for children of his age on the floor and asked him to pick out and keep the ones he liked and to explain why.

The first book he picked up was a collection of political cartoons lying with the others by mistake. He thought it was called The Magic Farm. It was in fact Steve Bell's caustic chronicle, Maggie's Farm. He sigh ed and decided he would keep it anyway and give it to his older brother who enjoyed drawing Mrs Thatcher's nose. 'Don't you mean Mr Heath's nose?' I asked. `No' he said.

Next he picked up some of the Usborne Pocket Guides series. Said they were smashing. Each book contains hundreds of tiny pictures showing all aspects of life in ancient Greece, Egypt, Rome — ideal for children hungry for information, which means for most children. He also took Richard Scarry's Best Christmas Book Ever (Collins, £3.50). He liked the cosy world of Busytown under snow, with its humanised and simply drawn pigs and cats and rabbits and mice and moles 'Doing Things'. He said it wasn't really Richard Scarry's best book but that he wanted it because he had his previous books.

We were in total agreement that, along with Jones's Fairy Tales, the best Christmas books we had seen so far were Jan Pienkowski's Robot (Heinemann £5.75) and Anno's Magical ABC (The Bodley Head £5.95). The first is a pop-up book, the second, an anamorphic alphabet. Heinemann have placed Robot on their adult list, fearing its life expectancy in the hands of a child to equal that of a hedgehog on a motorway. Robot is a brilliant invention, and though not as humourous as his earlier The Haunted House, it is technically superior. Because it has been glued together by 500 smiling ladies in a factory in Columbia, the publishers have been able to keep the price down.

I had forgotten about anamorphic drawings — distorted images which, when reflected in an equally distorted mirror, will appear quite normal. Anno's Magical ABC is full of distorted angels and anteaters which must be seen in the mirror paper that is provided with the book. It's one up on the usual alphabets and, as with Robot, it has the advantage of being a book one can play with as well as look at and read. A big advantage for under sevens.