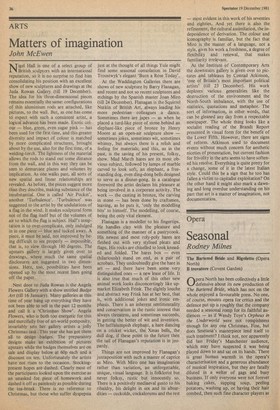 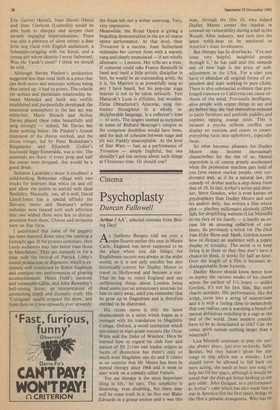 The Bartered Bride and Rigoletto (Opera North) II trovatore (Covent Garden) Opera North has been collectively a little defensive about its new production of The Bartered Bride, which has not on the whole enjoyed a favourable press. No one, of course, mounts opera for critics and the defence put up is roughly that the company needed a seasonal romp for its faithful audiences — as if Wendy Toye's Orpheus in the Underworld were not rompishness enough for any one Christmas. Fine, but does Smetana's masterpiece lend itself to such treatment? I think not, nor apparently did last Friday's Manchester audience, which may have suspected it was being played down to and sat on its hands. There is great human warmth in the opera's characterisation and a generous abundance of musical inspiration, but they are fatally diluted in a welter of gags and busy business. If only everyone were not forever baking cakes, supping soup, peeling potatoes, washing up, or having their hair combed, then such fine character players as Eric Garrett (Kecal), Joan Davies (Hata) and Joan Clarkson (Ludmilla) would be able both to sharpen and deepen their already engaging impersonations. There was also a plethora of silent extras: a dear little dog (fatal with English audiences), a Schnapps-swigging wife for Kecal, and a young girl whose identity I never fathomed. Was she Vasek's sister? I think we should be told.

Although Steven Pimlott's production suggested less than total faith in a piece that can both move and entertain without being thus tarted up, it had its points. The volatile yet serious and passionate relationship between Marenka and Jenik was swiftly established and purposefully developed: the emotional atmosphere in the last act was white-hot. Marie Slorach and Arthur Davies played these roles beautifully and sang strongly — indeed, Mr Davies has done nothing better. Mr Pimlott's formal treatment of the chorus worked, and the circus troupe, led by Peter Bodenham's Ringmaster and Elizabeth Collier's lusciously leggy Esmeralda, was a riot. The essentials are there: if every prop and half the extras were dropped, this would be a good Bride.

Stefanos Lazaridis's decor is excellent: a solid-looking Bohemian village with two trucks for interiors that whizz on and off and allow the action to unfold with ideal flexibility. Musically, too, all is well. David Lloyd-Jones has a special affinity for Slavonic music and Smetana's artless melodies were treated with such affection that one wished there were less to distract attention from them. Chorus and orchestra were on fine form.

I understand that some of the gaggery has been watered down since the opening a fortnight ago. If the process continues, then Leeds audiences may fare better than those in Manchester. They are certainly in for a treat with the revival of Patrick Libby's sound production of Rigoletto, which is extremely well conducted by Robin Stapleton and contains two performances of glowing accomplishment: Helen Field's innocent and vulnerable Gilda, and John Ravvnsley's hell-raising Jester, an interpretation of astonishing depth and dramatic truth. His `Cortigiani' nearly stopped the show, and from then on it was upwards, ever upwards: the finale left not a wither unwrung. Very, very impressive.

Meanwhile, the Royal Opera is giving a beguiling demonstration in the art of coarse opera performance. At that level, their Trovatore is a success. Joan Sutherland maintains her current form with a warmly sung and clearly enunciated — if not wholly idiomatic — Leonora. Her trills are a treat. If someone could take Franco Bonisolli in hand and instil a little artistic discipline in him, he would be an outstanding artist. As it is, his Manrico is as powerfully sung as any I have heard, but his pop-star stage manner is not to be taken seriously. Yuri Mazurok's Luna is efficient, but wooden. Elena Obraztsova's Azucena, sung fortissimo throughout in a wholly indecipherable language, is a collector's item — of sorts. The singers seemed as surprised at some of Richard Bonynge's tempos as the composer doubtless would have been, and the lack of cohesion between stage and pit was frankly *unacceptable. At the level of Star Wars — fun; as a performance of Trovatore — simply frightful, but one shouldn't get too serious about such things at Christmas time. Or should one?