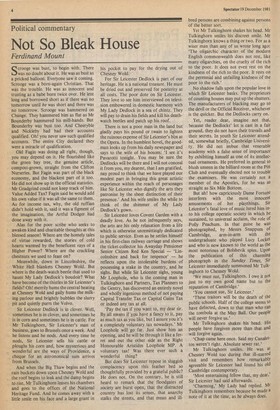 Not So Bleak House

Scrooge was bust, to begin with. There was no doubt about it. He was as bust as a pricked balloon. Everyone saw it coming. Scrooge was a born-again Christian. That was the trouble. He was as innocent and trusting as a babe born twice over. He lent long and borrowed short as if there was no tomorrow until he was short and there was no tomorrow. Scrooge was hammered on Change. They hammered him as flat as Mr Bounderby hammered his mill-hands. But Bounderby was bust too. And Cheeryble and Nickleby had had their accounts qualified. Oh! you never saw such qualified accounts. The entire City declared they were a miracle of qualification.

Old Fagin was doing all right, though, you may depend on it. He flourished like the green bay tree, the genuine article, compost-grown, straight from the Clifton Nurseries. But Fagin was part of the black economy, and the blackest part of it too. He did not show up in the official statistics. Mr Gradgrind could not keep track of him. Value Added Tax? Fagin said he would add his own value if it was all the same to them. As for income tax, why, the old ruffian didn't hold with it, said it was a figment of the imagination, the Artful Dodger had done away with it.

Alas for the poor scribe who seeks to awaken kind and charitable thoughts at this blessed season! Where are the homely tales of virtue rewarded, the stories of cold hearts warmed by the beneficent rays of a Higher Power? Where are the crackling chestnuts we used to feast on?

Meanwhile, down in Lincolnshire, the White Hell blankets Chesney Wold. But where is the death-watch beetle that used to haunt My Lady Dedlock's boudoir? What have become of the thistles in Sir Leicester's fields? Oh! merrily hums the central heating at Chesney Wold and gaily hums the milking parlour and brightly bubbles the slurry pit and quietly purrs the Volvo.

And when the Big Thaw begins and the rain buckets down upon Chesney Wold and the roof begins to leak and the damp begins to rise, Mr Tulkinghorn leaves his chambers and goes to the offices of the National Heritage Fund. And he comes away with a little smile on his face and a large grant in his pocket to pay for the drying out of Chesney Wold.

For Sir Leicester Dedlock is part of our heritage. He is a national treasure. He must be dried out and preserved for posterity at all costs. The poor dote on Sir Leicester. They love to see him interviewed on television embowered in domestic harmony with My Lady Dedlock in a sea of chintz. They will pay to drain his fields and kill his deathwatch beetles and patch up his roof.

There is not a poor man in the land but gladly pays his pound or twain to lighten the ruinous expense of Sir Leicester's box at the Opera. In the humblest hovel, the goodman looks up from his daily newspaper and says to the wife of his bosom: 'I see it's Pavarotti tonight. You may be sure the Dedlocks will be there and I will not conceal it from you, my dearest, that I am gratified, nay proud to think that we have played our modest part in bringing this great artistic experience within the reach of personages like Sir Leicester who dignify the arts they patronise by the sheer distinction of their presence.' And his wife smiles the while to think of the shimmer of My Lady Dedlock's gown.

Sir Leicester loves Covent Garden with a deadly love. As he not infrequently says, the arts are his only relaxation from a life which is otherwise unremittingly dedicated to public service. Even as he settles himself in his first-class railway carriage and shows the ticket-collector his Awayday Pensioner Senior Citizen Red Ken Special — 'Lincolnshire and back for tenpence' — he reflects upon the intolerable burdens of possessing a stake in the country, and he sighs. But while Sir Leicester sighs, young Mr Loophole, who is the coming man in Tulkinghorn and Partners, Tax Planners to the Gentry, has discovered an entirely novel and wholly ingenious method of not paying Capital Transfer Tax or Capital Gains Tax or indeed any tax at all.

'Pay the tax if you want to, my dear sir. By all means if you have a fancy to it, pay as much tax as you like, but I assure you it's a completely voluntary tax nowadays.' Mr Loophole will go far. Just show him an opening, and he will be through it like a ferret and out the other side as the Right Honourable Aristides Loophole MP. A voluntary tax! Was there ever such a wonderful thing?

But does Sir Leicester repose in sluggish complacency upon this feather bed so thoughtfully provided by a grateful public? He does not. On the contrary, he is still heard to remark that the floodgates of society are burst open, that the distracted country has lost its senses, that anarchy stalks the streets, and that mean and ill bred persons are combining against persons of the better sort.

No shadow falls upon the popular love in which Sir Leicester basks. The proprietors of counting houses may put up the shutters. The manufacturers of blacking may go to the devil or the Official Receiver, whichever is the quicker. But the Dedlocks carry on.

Yet, reader dear, imagine not that, because the Dedlocks' lot is cast in a fair ground, they do not have their travails and their secrets. In youth Sir Leicester attended, somewhat briefly, Cambridge University. He did not imbue that venerable academy with a false sense of importance by exhibiting himself as one of its intellectual ornaments. He preferred in general to blush unseen in the billiard room at the Pitt Club and eventually elected not to trouble the examiners. He was certainly not a member of the Apostles, for he was as straight as Six Mile Bottom.

But ah! how capriciously Dame Fortune interferes with the most innocent amusements of her playthings. Sir Leicester's fatal love of music lured him into his college operatic society in which he sustained, to universal acclaim, the role of Polly Peachum. In that guise he was photographed, by Messrs Snappum of Cambridge, arm-in-arm with the undergraduate who played Lucy Locker and who is now known to the world as the most notorious of Bolshevik spies. Upon the publication of this charming photograph in the Sunday Times, Sir Leicester immediately summoned Mr Tulkinghorn to Chesney Wold.

'We must sue, Tulkinghorn. I owe it flOt just to my own good name but to the reputation of Cambridge.'

'These traitors will be the death of the public schools. Half of the college seems to have defected, down to that man who ran the tombola at the May Ball. Our people will never forgive us.'

Mr Tulkinghorn shakes his head. His people have forgiven more than that and will forgive again.

Mr Tulkinghorn smiles. He was at Chesney Wold too during that ill-starred visit and remembers how remarkably agreeable Sir Leicester had found his old Cambridge contemporary.

'Most entertaining fellow that, my dear,' Sir Leicester had said afterwards.

'Charming,' My Lady had replied. Mr Tulkinghorn remembers because he made a note of it at the time, as he always does.