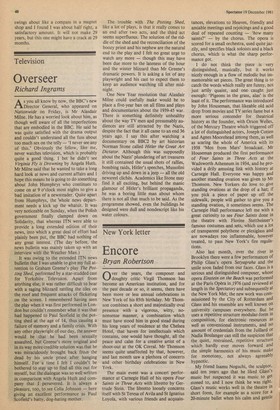 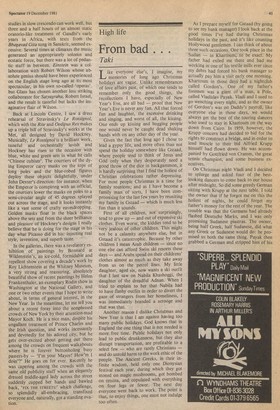 Over the years, the composer and doughty critic Virgil Thomson has become an American institution, and for the past decade or so, it seems, there have been more or less annual celebrations in New York of his 85th birthday. Mr Thomson combines a short and majestically oval presence with a vigorous, witty, nononsense manner, a combination which must have stood him in good stead during his long years of residence at the Chelsea Hotel, that haven for intellectuals which contains, one would have thought, all the peace and calm for a creative artist of a shoot-out at the OK Corral. Mr Thomson seems quite unaffected by that, however, and last month saw a plethora of concerts and other birthday celebrations in New York.

fhe main event was a concert performance at Carnegie Hall of his opera Four Saints in Three Acts with libretto by Gertrude Stein. The libretto loosely concerns itself with St Teresa of Avila and St Ignatius Loyola, with various friends and acquain

tances, elevations to Heaven, friendly and amiable meetings and rejoicings and a good deal of repeated counting — 'how many saints?' — by the chorus. The opera is scored for a small orchestra, used quite jazzily, and specifies black soloists and a black chorus, which is what the sharp performance got.

I do not think the piece is very distinguished, musically, but it works nicely enough in a flow of melodic but immemorable set pieces. The great thing is to catch the words which really are funny, not just artily quaint, and one caught just enough: 'Pigeons in the grass, alas' is the least of it. The performance was introduced by John Houseman, that likeable old acid drop from movies and TV series fame but a more serious contender for theatrical history as the founder, with Orson Welles, of the Mercury Theatre which triggered off a lot of distinguished actors, Joseph Cotten and Agnes Moorehead among them, as well as scaring the whole of America with its 1938 `Men from Mars' broadcast. Mr Houseman produced the first performance of Four Saints in Three Acts at the Wadsworth Atheneum in 1934, and he provided a drily amusing link with history at Carnegie Hall. Everyone was happy and another standing ovation was given to Mr Thomson. New Yorkers do love to give standing ovations at the drop of a hat; if you pick a piece of paper up off the sidewalk, people will gather to give you a standing ovation, it sometimes seems. The Carnegie Hall performance left me with a great curiosity to see Four Saints done in the theatre with Florine Stettheimer's famous costumes and sets, which use a lot of transparent polythene or plexiglass and are nowadays too inflammable, however treated, to pass New York's fire regulations.

Also last month, over the river in Brooklyn there were a few performances of Philip Glass's opera Satyagraha and the smile soon faded from our faces. Glass is a serious and distinguished composer, whose

opera Einstein on the Beach was performed at the Paris Opera in 1976 (and reviewed at length in the Spectator) and subsequently at the New York Met; the new work was commissioned by the City of Rotterdam and Glass and his ensemble are well known on university campuses everywhere. But he uses a repetitive structure modular-form in composition, for electronic resources as well as conventional instruments, and no amount of credentials from the Juillard or Nadia Boulanger can still the suspicion that the quiet, restrained, repetitive structure which hardly ever moves forward and the simple harmonics of his music make for monotony, not always agreeablY hypnotic.

My friend Isamu Noguchi, the sculptor, said ten years ago that he liked Glass's music but suspected it was music to get stoned to, and I now think he was right. Glass's music works well in the theatre In short form, for example as a score for a 20-minute ballet when his calm and gentle

studies in slow crescendo can work well, but three and a half hours of an almost static oratorio-like treatment of Gandhi's early years in Africa, with texts from the Bhagavad Cita sung in Sanskrit, seemed excessive. Several times at climaxes the music generated an appropriately solomn and ecstatic force, but there was a lot of pedantic stuff in between. Einstein was a collaboration with Robert Wilson whose absolute genius should have been experienced on the English stage long ago at its most spectacular, in his own so-called 'operas'. but Glass has chosen another less striking collaborator for Satyagraha, Robert Israel, and the result is tasteful but lacks the imaginative flair of Wilson.

Back at Lincoln Centre, I saw a dress rehearsal of Stravinsky's Le Rossignol, which with the Rite and Oedipus Rex makes up a triple bill of Stravinsky's works at the Met, all designed by David Hockney. Musically, Le Rossignol is a brilliant work, tuneful and orchestrally lavish and Hockney has risen to the occasion with blue, white and green sets in what he calls 'Chinese cubism'. The courtiers of the dying Emperor carry masks on the tops of long poles and the blue-robed figures deploy these objects delightfully, under John Dexter's direction: for instance, when the Emperor is conspiring with an official, the courtiers lower the masks on poles to a semi-circular angle of 45 degrees splayed out across the stage, and it looks instantly like a vast scene of crafty eavesdropping. Golden masks float in the black spaces above the sets and from the sheer brilliance and pleasure of Hockney's designs I really believe that he is doing for the stage in his day what Picasso did in his: injecting real style, invention, and superb taste.

In the galleries, there was a revelatory exhibition of paintings by Bonnard at Wildenstein's, an ice-cold, formidable and repellent show covering a decade's work by Roy Lichtenstein at the Whitney Museum, a very strong and reassuring, absolutely beautiful show of recent paintings by Helen Frankenthaler, an exemplary Rodin show in Washington at the National Gallery, and one or two other events that I hope to write about, in terms of general interest, in the New Year. In the meantime, let me tell you about a recent foray into the nonplussed crowds of New York by their attention-mad Mayor Koch. He is a nice man, despite his ungallant treatment of Prince Charles and the Irish question, and works incessantly and devotedly for his adored city, but he gets over-excited about getting out there among the crowds on frequent walkabouts where he is forever buttonholing busy passers-by — 'I'm your Mayor! How'm I doin'?' He goes on for ever. Recently he was capering among the crowds with the same old publicity stuff when an elegantly dressed middle-aged lady across the street suddenly cupped her hands and bawled back, 'FIX THE STREETS!' which challenge, so splendidly all-embracing, transfixed everyone and, naturally, got a standing ovation.