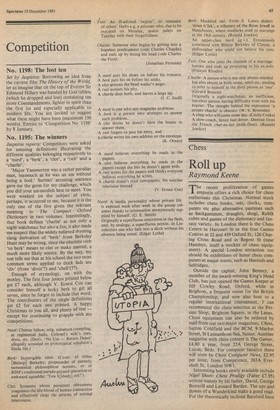 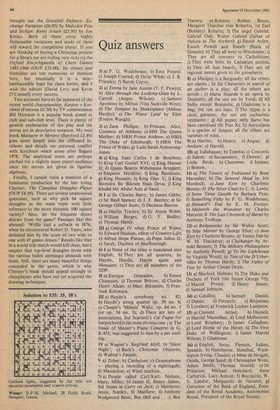 The recent proliferation of games emporia offers a rich choice for chess enthusiasts this Christmas. Normal stock includes chess books, sets, clocks, computers etc plus alternative pastimes such as backgammon, draughts, shogi, Rubik cubes and games of the diplomacy and fantasy variety. In London there is the Chess Centre in Harcourt St or the four Games Centres at 22 and 439 Oxford St, 126 Charing Cross Road and in Regent St (near , Hamleys, itself a stockist of chess equipment). A special London attraction too should be exhibitions of home chess computers at major stores, such as Harrods and Selfridges.

Outside the capital, John Benney, a member of the award-winning King's Head Club, has just opened the Games Keeper at 105 Cowley Road, Oxford, while in Brighton, a frequent venue for the British Championship, and now also host to a regular international tournament, I can recommend the chess selection at the Persian Shop, Brighton Square, in the Lanes. Chess equipment can also be ordered by mail from our two major magazines, Chess, Sutton Coldfield and the BCM, 9 Market Street, St Leonards-on-Sea, Sussex. Another magazine with chess content is The Gamer, £4.80 a year, from 23A George Street, Luton, Beds. For computer fanatics there will soon be Chess Computer News, £2.95 per issue, from Competence, 263A Eversholt St, London NW1.

Interesting books newly available include Nigel Short: Chess Prodigy (Faber £7.95) written mainly by his father, David, George Botterill and Leonard Barden. The ups and downs of a Wunderkind make a good read. For the theoretically inclined Batsford have brought out the Grunfeld Defence: Exchange Variation (£6.95) by Malcolm Pein and Sicilian: Keres Attack (£5.95) by Jon Kinlay. Both of these cover highly fashionable variations and study of them will reward the competitive player. If you are thinking of buying a Christmas present for a library (or are feeling very rich) try the Oxford Encyclopaedia of Chess Games 1485-1866 (OUP £35.00). Its virtues and blemishes are too numerous to mention here, but essentially it is a nearinexhaustible feast for chess lovers, and I wish the editors (David Levy and Kevin O'Connell) every success.

Two accounts have so far appeared of the recent world championship. Karpov v Korchnoi (Fontana £2.50) by TV commentator Bill Hartston is a popular book aimed at club and sub-club level. There is plenty of general explanation of the play and the moves are in descriptive notation. My own book Massacre in Merano (Batsford £3.95) goes more deeply into the offboard incidents and details my personal conflict with Korchnoi which arose after Baguio 1978. The analytical notes are perhaps pitched for a slightly more expert audience since the moves are given in figurine algebraic.

Finally, I cannot resist a mention of a handsome production by the late Irving Chernev, The Compleat Draughts Player (OUP £8.95). There are several unanswered questions, such as why pick 64 square draughts as the main topic with little reference to the more dynamic 100 square variety? Also, do the frequent draws detract from the game? Passages like this abound: `Wyllie had a setback in 1876, when he encountered Robert D. Yates, who defeated him by the score of two wins to one with 47 games drawn.' Results like that in a world title match would kill chess, but suspect that top-level draughts (even with the various ballot openings) abounds with them. Still, there are many beautiful things concealed in the game, which is why Chernev's book should appeal strongly to chessplayers who have not yet acquired the drawing techniques.