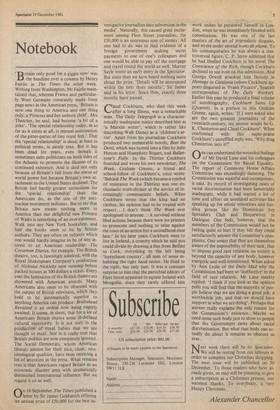 'Britain only good for a giggle now' was the headline over a column by Henry Fairlie in The Times the other week. Writing from Washington, Mr Fairlie maintained that, whereas France and particularly West Germany constantly make front page news in the American press, 'Britain is now one thing to America and one thing only; a Princess and her unborn child'. Mrs Thatcher, he said, had become 'a bit of a joke'. 'The special relationship today, in so far as it exists at all, is mutual anticipation of the pitter-patter of tiny royal feet.' That the 'special relationship' is dead, at least in political terms, is surely true. But it has been dead for years, even though it sometimes suits politicians on both sides of the Atlantic to promote the illusion of its continued existence. And it died not only because of Britain's fall from the status of world power but because Britain's own attachment to the United States declined. The British feel hardly greater enthusiasm for the 'special relationship' than the Americans do, as the size of the antinuclear movement indicates. But to say that Britain now means nothing more to America than our delightful new Princess of Wales is something of an overstatement. Walk into any New York bookshop, and half the books seem to be by British authors. They are often on subjects which one would hardly imagine to be of any interest to an American readership: The Crossman Diaries, for example. The British theatre, too, is fawningly admired, with the Royal Shakespeare Company's production of Nicholas Nickleby now running before packed houses at 100 dollars a ticket. Every year the luminaries of the British theatre are showered with American awards. Many Americans also seem to be obsessed with the output of British television, which they hold to be automatically superior to anything America can produce. Brideshead Revisited is an ordeal now being eagerly awaited. It seems, in short, that for a lot of Americans Britain enjoys some ill-defined cultural superiority. It is not only in the production of royal babies that we are thought to excel. Nor is it really true that British politics are now completely ignored. The Social Democrats, whom American liberals admire for their nice, clean, nonideological qualities, have been receiving a lot of attention in the press. What remains true is that Americans regard Britain as an economic disaster area with dramatically diminished international influence. But we regard it so as well.

On 16 September The Times published a letter by Sir James Goldsmith offering 'an annual prize of £50,000 for the best in vestigative journalism into subversion in the media'. Naturally, this caused great excitement among Fleet Street journalists, for 00,000 is an enormous sum of money. All one had to do was to find evidence of a foreign government making secret payments to one of one's colleagues and one would be able to pay off the mortgage and travel round the world as well. Murray Sayle wrote an early entry in the Spectator. But since then we have heard nothing more about the prize. 'Details will be announced within the next three months', Sir James said in his letter. Since then, exactly three months have passed.

rl laud Cockburn, who died this week %—/after a long illness, was a remarkable man. The Daily Telegraph in a characteristically inadequate notice described him as 'a Marxist writer', which is rather like describing Walt Disney as a 'children's artist'. Apart from his journalism Cockburn produced two memorable novels, Beat the Devil, which was turned into a film by John Huston and Humphrey Bogart, and Ballantyne's Folly. In the Thirties Cockburn founded and wrote his own newsletter, The Week. Graham Greene, a friend and school-fellow of Cockburn's, once wrote: 'Behind The Week (which became a symbol of resistance in the Thirties) was one enthusiastic truth-diviner at the service of increasingly communistic beliefs. When Cockburn wrote that the king had no clothes, his opinion had to be treated with respect.. .1 don't think The Week ever apologised to anyone... it survived without libel actions because there were no printers to prosecute and nothing to seize against the costs of an action but a secondhand shoe lace.' In his later years Cockburn went to live in Ireland, a country which he said you could divide by drawing a line from Belfast to Cork, everything to the left being 'leprechaun country', all men of sense inhabiting the right hand sector. He lived to the right, but only just. It was a constant surprise to him that the parochial editors of Fleet Street appeared to equate Ireland with Mongolia, since they rarely offered him work unless he presented himself in London, when he was immediately flooded with commissions. He was one of the last masters of the art of journalistic disguise, and wrote under several noms de plume. To his contemporaries he was always a controversial figure. C. P. Snow admitted that he had libelled Cockburn in his novel The Conscience of the Rich, though Cockburn declined to sue even on this admission. And George Orwell attacked him fiercely in Homage to Catalonia (where Cockburn appears disguised as 'Frank Pitcairn', Spanish correspondent of The Daily Worker). Earlier this year he produced a final volume of autobiography, Cockburn Sums Up (Quartet). In a preface to this Graham Greene, again, writes: 'If I were asked who are the two greatest journalists of the twentieth-century, my answer would be G. K. Chesterton and Claud Cockburn'. When confronted with this super-praise Cockburn's unruffled reply was, 'Why drag Chesterton into it?'

One can understand the wounded feelings of Mr David Lane and his colleagues on the Commission for Racial Equality. The report of Commons Home Affairs Committee was exceedingly damning. The Commission was wasteful and incompetent, it said. Its record of investigating cases of racial discrimination had been lamentably inadequate, while it had wasted a lot of time and effort on unrelated activities like speaking up for ethnic minorities and funding groups like the Dominican Joy Spreaders Club and Housewives in Dialogue. One feels, however, that the members of the Commission would not be feeling quite so hurt if they felt they could satisfactorily answer the Committee's complaints. One senses that they are themselves aware of the impossibility of their task, that to impose good race relations on society is beyond the capacity of any body, however energetic and well-intentioned. When asked by Ann Leslie of the Daily Mail why the Commission had been so 'ineffective' in the field of race relations, Mr Lane meekly replied: 'I think if you look at the opinion polls you will find that the majority of people believe that we are doing a good job, a worthwhile job, and that we should have support in what we are doing'. Perhaps that answer really explains the only reason for the Commission's existence. Maybe we need some such body just to show to people that the Government cares about racial discrimination. But what that body can actually do about it remains as obscure as ever.

Next week there will be no Spectator. We will be resting from our labours in order to complete our Christmas shopping. The next issue will be published on 30 December. To those readers who have already given, or may still be planning to give a subscription as a Christmas present, our warmest thanks. To everybody, a very Happy Christmas.