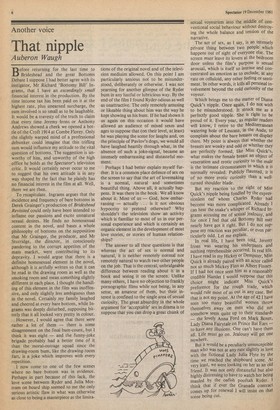 Before returning for the last time to Brideshead and the great Bottoms Debate I suppose I had better agree with its instigator, Mr Richard 'Bottomy Bill' Ingrams, that I have an exceedingly small financial interest in the production. By the time income tax has been paid on it at the highest rate, plus unearned surcharge, the sum involved is so small as to be laughable.

It would be a travesty of the truth to claim that every time Jeremy Irons or Anthony Andrews showed a cheek we opened a bottle of the Croft 1914 at Combe Florey. Only the slightly warped mind of a professional debunker could imagine that this trifling sum would influence my attitude to the vital question of bottoms. The suggestion is un worthy of him, and unworthy of the high office he holds as the Spectator's television critic. It would certainly never occur to me to suggest that his own attitude is in any way shaped by the fact that he plainly has no financial interest in the film at all. Well, there we are then.

To recapitulate. Ingrams argues that the incidence and frequency of bare bottoms in Derek Grainger's production of Brideshead Revisited could only have been intended to inflame our passions and excite unnatural sexual desires. He finds no homosexual content in the novel, and bases a whole philosophy of bottoms on the supposition that Mr Grainger, the producer, and Mr Sturridge, the director, in consciously pandering to the corrupt appetites of the mass market, were contributing to its depravity. I would argue that there is a definite homosexual element in the novel, although it is artfully written so that it can be read in the drawing room as well as the smoking room and mean something slightly different in each place. I thought the handl ing of this element in the film was inoffensive, and only slightly less ambiguous than in the novel. Certainly my family laughed and cheered at every bare bottom, while Ingrams was deeply disturbed, supposing bit terly that it all looked very pretty in colour.

However, I would agree that there were rather a lot of them — there is some disagreement on the final bum-count, but I think it was eight — and the funny-joke brigade probably had a better time of it than the moral-outrage squad since the drawing-room bum, like the drawingroom fart, is a joke which improves with every repetition.

I now come to one of the few scenes where no bare bottom was in evidence.

Perhaps in part because of this lack, the love scene between Ryder and Julia Mottram on board ship seemed to me the only serious artistic flaw in what was otherwise as close to being a masterpiece as the limita tions of the original novel and of the television mediuim allowed. On this point I am particularly anxious not to be misunderstood, deliberately or otherwise. I was not yearning for another glimpse of the Ryder bum in any lustful or lubricious way. By the end of the film I found Ryder odious as well as unattractive. The only remotely amusing or likeable thing about him was the way he kept showing us his bum. If he had shown it us again on this occasion it would have allowed an audience of mixed sexes and ages to suppose that (on their level, at least) he was playing the scene for laughs and, on the principle of Pavlov's dogs, we would all have laughed heartily through what, in the absence of such a joke-signal, became an intensely embarrassing and distasteful moment.

Perhaps I had better explain myself further. It is a common place defence of sex on the screen to say that the art of lovemaking is a normal, natural and sometimes beautiful thing. Above all, it actually happens. It was there in the book. We all know about it. Most of us — God, how embarrassing — actually ... is it not obvious hypocrisy to pretend otherwise? Why shouldn't the television show an activity which is familiar to most of us in our personal experience and which is certainly an organic element in the development of most love stories, or stories of human relationships?

The answer to all these questions is that whereas the act of sex is normal and natural, it is neither remotely normal nor remotely natural to watch two other people on the job. That is the central, unbridgeable difference between reading about it in a book and seeing it on the screen. Unlike many others, I have no objection to frankly pornographic films while not being, in any sense, an amateur of them, but their interest is confined to the single area of sexual curiosity. The great absurdity in the whole argument for 'acceptable' sex in drama is to suppose that you can drop a great chunk of sexual voyeurism into the middle of conventional social behaviour without destroying the whole balance and tension of the narrative.

The act of sex, as I say, is an intensely private thing between two people which happens out of sight of everyone else. The screen must leave its lovers at the bedroom door unless the film's purpose is sexual arousal, which is itself so intense and con centrated an emotion as to exclude, at any rate on celluloid, any other feeling or senti ment. In other words, it kills all personal involvement beyond the cold cunosity of the voyeur.

But my reaction to the sight of Miss Quick's nipple being fondled by the expressionless oaf whom Charles Ryder had become was more complicated. Already I can hear the snake's whisper of Richard Ingrams accusing me of sexual jealousy, and for once I feel that old Bottomy Bill may nearly have got it right. But I do not suppose my reaction was peculiar, or even particularly odd. Let me explain.

In real life, I have been told, Jeremy Irons was wearing his underpants and nothing reprehensible occurred. In real life, I have read in my Hickey or Dempster, miss Quick is already paired with an actor called not so much Mickey Finn as Albert Finney. If I had not once seen him as a reasonably credible Hamlet I would suppose that this choice might indicate Miss Quick's preference for the rough trade, which would rule most of us out in any ease. But that is not my point. At the age of 42 I have seen too many beautiful women throw themselves away on men who did not somehow seem quite up to their standards —ty Dhelioae Y Anna Ford on Mark Boxer, Lady Diana Fairytale on Prince Bat Ears — to have any illusions. One can't have them all. Life must go on. Jealousy will get one nowhere.

it would be a peculiarly unsusceptible man who was not at any rate slightly in love with the fictional Lady Julia F1yte by the time we reached the shipboard scene. At very least, we were looking on her as an old friend. It was not only distasteful but also highly distressing to have to watch her being mauled by the oafish pooftah Ryder.

i think that f ever the Granada contract comes up for renewal I will insist on that scene being cut.